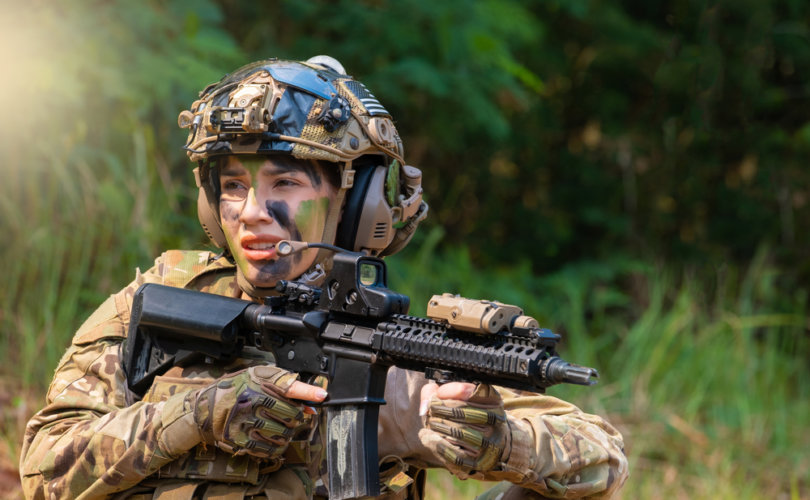 WASHINGTON, D.C. (LifeSiteNews) — The U.S. Senate advanced a bill requiring young American women to sign up for the military draft that is expected to pass despite opposition from Senate conservatives.

The National Defense Authorization Act (NDAA) for the 2022 fiscal year advanced in the Senate on  Wednesday by an 84-15 vote.

Considered a must-pass, the annual defense policy bill this year contains a provision that would require “all Americans” between the ages of 18 and 26, including young women, to register with the Selective Service System.

Registrants could be called up for military service in the event of a wartime draft.

Among those who voted against bringing the bill to the floor for debate were Republican Sens. Rand Paul of Kentucky, Ted Cruz of Texas, and Josh Hawley of Missouri.

Hawley has blasted the legislation for “forc[ing] our daughters, mothers, wives, and sisters to fight our wars,” and earlier this month introduced an amendment to strip out the provision forcing women to sign up for military conscription.

“Volunteering for military service is not the same as being forced into it, and no woman should be compelled to do so,” Hawley said.

To date, Hawley has been joined by 10 co-sponsors who also want to see the clause scrubbed from the final bill before it goes to the president’s desk to be signed.

5 additional Senators signed on to the amendment this week, bringing the total to 10 cosponsors to remove the provision forcing women to register for the draft. pic.twitter.com/1h4h0Ks2rW

The altered language that would extend Selective Service registration to women was added to the NDAA in July by Senate Armed Services Chair Jack Reed in a draft of proposed changes.

On July 21, the Senate Armed Services Committee voted 23-2 to approve the altered version of the bill in a closed-door session, just days after it was announced that language in the existing draft law had been modified to eliminate reference to “males” and instead require “all Americans” age 18-26 to register.

In September, the $778 billion NDAA was passed by the U.S. House of Representatives after 181 Democrats and 135 Republicans voted to approve it.

Only 38 Democrats and 75 Republicans voted against the legislation.

Under the new language, failure of young women to register for the draft would make them  subject to the same penalties as men, including fines of up to $250,000 or imprisonment for up to five years.

While the U.S. government has not implemented a draft since 1973, following the passage of the 2022 NDAA, women could be conscripted alongside men in the event of a future national wartime emergency.

Despite widespread bipartisan support for the bill, even with its controversial provision forcing women to sign up for the military draft, a minority of Republicans in Congress staunchly opposed the legislation.

“God bless that woman if she wants to go serve in the military and is prepared to fight,” Cruz  said. “But I’m the father of two daughters. The idea that the government would forcibly draft them, and put them in a place where they would be engaged in combat against a man who the statistics demonstrate is likely to have significantly more body mass and significantly more body strength? That’s not fair.”

“Look, right now, today, if you vote for the NDAA, you are voting to draft our daughters,” House Freedom Caucus member Chip Roy of Texas said in a press conference on September 22. “There is no other position you can take. The current law of the land does not have a requirement that our daughters be drafted, OK? If this NDAA is passed and signed into law, then our daughters will be required to sign up for Selective Service and make themselves available for the draft.”

Moves to require women to sign up for Selective Service have grown over the years as more military occupations, including combat roles, have been opened to women.

Female members of the U.S. Armed Forces are currently allowed in every military occupation after the 1994 rescinding of the 1988 “Risk Rule” and the 2015 move by the Pentagon to open all military positions, including combat roles, to women.

According to the Center for a New American Security (CNAS), “women have been able to serve in almost all Air Force and Navy positions since the mid-1990s, save for submarines and some small vessels.”

Last year, the issue of extending the draft to include women was brought before Congress in a March 2020 report by the National Commission on Military, National, and Public Service.

According to the report, “[t]he Commission concluded that the time is right to extend Selective Service System registration to include men and women, between the ages of 18 and 26. This is a necessary and fair step, making it possible to draw on the talent of a unified Nation in a time of national emergency.”

Defense One argued that despite pushback by conservatives — who have been joined by anti-war activists in resisting a female draft — the extension of the Selective Service registration to women is likely to pass.

“Attaching it to NDAA basically ensures that it will [pass], barring a massive herculean effort to get it unattached somehow,” Kara Vuic of Texas Christian University told the outlet. “I think it’s going to pass.”