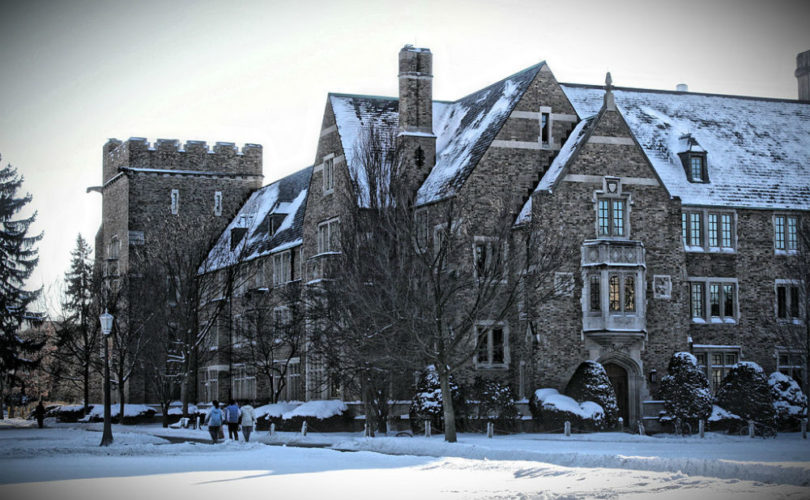 “Our goal is to develop a well-informed, action-oriented network of students committed to serving the youngest members of our society,” an officer from a new student group that supports traditional marriage and values at the University of Notre Dame told The Cardinal Newman Society.

In a special interview with the Society, Notre Dame student Tim Bradley explained the purpose and future plans of the group Students for Child Oriented Policy (SCOP)—a student organization dedicated to advocating for and educating students on policy affecting children in all areas of state and national significance. The group had a tumultuous first year, which started with the University denying recognition to the group and culminated in finally winning recognition as an official club, despite opposition.

According to Bradley, who serves as SCOP treasurer, the mission of promoting child-oriented policy “is what we will continue to aim to do moving forward by hosting events on campus and by calling for and engaging in reasoned arguments on issues that bear greatly on the well-being of children such as marriage, education, drugs, and pornography.”

In order to address the growing problem of pornography, Bradley said SCOP is “gathering a diverse group of speakers who will offer perspectives on pornography from religion, philosophy, social science, and law and public policy.”

The conference will take place on January 31, 2015, and will feature several professors from Notre Dame, as well as law professor Mary Leary from The Catholic University of America and Fr. Peter Ryan, S.J., executive director of the secretariat of Doctrine and Canonical Affairs for the U.S. bishops.

“Additionally, we plan to host events addressing the marriage question (with Ryan Anderson, Sherif Gergis, and Ron Belgau), education policy, adoption policy, and to sponsor the showing of a series of movies on campus bearing upon these issues,” he stated.

Bradley credited SCOP’s eventual approval to the students comprising the Club Coordination Council at Notre Dame. “Any appeals to university administrators in the interim between our initial rejection in the spring and our approval in the fall were fruitless,” he said in the interview. Bradley acknowledged that the Council deserved credit for being willing to hear SCOP’s appeal, recognize that the group had been rejected based on “a general misunderstanding of the club’s mission,” and promptly correcting its mistake.

However, “SCOP has faced an uphill battle since its approval,” according to Bradley. “Some students are more interested in leveling charges of bigotry and shutting down debate than in entertaining an argument. Others are very interested in discussing issues like the definition of marriage, and SCOP’s approval has provided an occasion for just this kind of discussion.”

The reaction to SCOP’s approval has ultimately been mixed, Bradley observed. “There are students who strongly oppose SCOP’s mission of promoting child-oriented policy and who are intent on labeling us as haters.”

However, he continued, “There are also many students who support our group and are pleased with our presence on campus.” Some faculty members “disagree with our position but respect our willingness to offer reasoned arguments and are willing to enter into a discussion,” Bradley noted. But other members of the faculty “were frustrated by our group’s initial rejection and offered to help us in bringing about a reversal of that [initial] decision.”

“SCOP provides a needed balance to the campus discussion of issues such as marriage and pornography,” Bradley noted. “Especially given the [Notre Dame] administration’s reticence to do anything by way of living up to that facet of its calling as a Catholic university to articulate, support, and defend a sound understanding of marriage and sexuality,” he said. “SCOP does an honorable service to the university by standing up for the most vulnerable among us and by advocating for a correct understanding of marriage and a proper response to issues such as pornography and drugs.”

“As a group we continue to grow and to develop students who are capable leaders and who can confidently engage in debate about the issues that are central to our mission as a club,” Bradley shared. “We intend to encourage education about these issues and to promote policy making that gives primary emphasis to how policy affects children.”