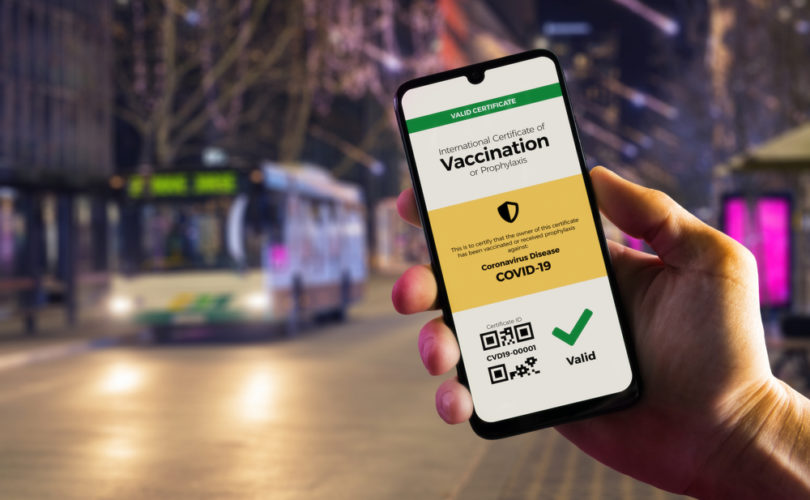 LONDON, May 12, 2021 (LifeSiteNews) — The U.K. government has announced it will be introducing vaccine passports from May 17, which will be available in a digital format as well as on paper, a move which human rights activists have warned threatens “deeper injustice, division and discrimination.”

The Department of Health and Social Care issued guidance on “[d]emonstrating your COVID-19 vaccination status when travelling abroad.”

Individuals who have had both doses of the experimental vaccines, are to be able to use an updated version of the National Health Service (NHS) app to display their vaccinated status. The change will come into effect on May 17, when the next easing of the current national lockdown, which began in the new year, will mean that Britons can leave the country for tourism without breaking the law.

From May 17 the NHS health app will also act as a 'Covid passport' to show your vaccination status for overseas travel says @grantshapps https://t.co/1zBUvv01uj pic.twitter.com/vBDXfWDrR3

In order to enable this system to proceed, an update has been made to the NHS smartphone app, which is different from the NHS COVID-19 app currently in use for the COVID track and trace scheme. Patients can already use the standard NHS app to order prescriptions, arrange a doctor’s appointment, or view medical records. Vaccine status is also currently shown, but only when this is directly enabled by a General Practitioner (GP).

However, the new update will bypass the involvement of GPs around the country, and would apparently not require a link to GP medical records. While not currently able to display the results of COVID tests, this capability is promised to be available in the future.

Those who do not have a smartphone can instead call the NHS helpline and request a paper version of their vaccine certificate.

While the vaccine passports, or COVID status certificates, are being rolled out to those with two vaccine doses, they are not (yet) mandatory, and their effect will be limited for now. The U.K’s “green list” of travel to permitted countries is currently only 12 in number, and few countries will even accept the vaccine passports instead of the widely used COVID-19 tests.

U.K.’s mixed history on the issue of vaccine passports

The announcement comes after months of mixed messages and contradictions in the U.K. about the issue of vaccine passports. In December, vaccine minister Nadhim Zahawi said twice that “we have no plans to introduce so-called vaccine passporting,” adding that he urged businesses “not to even think about that.”

However, in January the government finally admitted that it was funding a trial of COVID vaccination passports, with £450,000 awarded to eight companies.

Prime Minister Boris Johnson had appointed minister Michael Gove to lead a review into the use of vaccine passports, referring to “deep and complex issues.” Gove subsequently visited Israel in April to study the country’s restrictive “green pass,” which has been described as creating a “medical apartheid.”

Gove’s impressions of the “green pass” would seem to have been favorable, as the U.K. government is now rolling out its own vaccine passport, despite a petition to Parliament, asking that no such technology be instituted. The petition, now signed by over 349,000 people, stated that a vaccine passport would be “unacceptable,” prompting the matter to be debated in Parliament on March 15.

The government has been firm in avoiding the term “vaccine passport,” choosing instead to dub the passport a “COVID certification status” system, in an attempt to create better optics for the proposal. Previously Johnson had said that the idea of introducing such documents would “raise all sorts of issues.” Now his Conservative majority government is set to bring in vaccine passports within days.

Despite Johnson’s documented historical opposition to vaccine passports, and Zahawi’s December 2020 comments rejecting their use, the Ada Lovelace Institute has compiled extensive research to show that the U.K. has been in the process of implementing the passports since the spring of 2020. The institute noted that “Public Health England’s draft contact tracing operating model, as of 23 April 2020, explicitly identified immunity risk certification as the sixth pillar of the U.K. Government’s contact tracing plan.”

Lord Bethell, the Minister for Innovation at the Department for Health and Social Care, then had two meetings in April 2020 (April 13 and 20) to discuss COVID-19 status certification. The nationwide lockdown had started only weeks before, on March 23, and was supported by law on March 26.

The next month, May 18, he testified that “our plans [the Government’s immunity certificate plans] are in development.”

Reacting to the recent news, the lobbying group StopCommonPass, which has been fighting against vaccine passports, warned that they would have an effect upon millions: “Travel is one of our greatest and most cherished liberties that we want available to all. No one should be denied boarding at departure or entry to another nation because of a virus with a 0.15% global IFR. Using vaccine passports as a pre-requisite for departure or entry to any nation would coerce hundreds of millions of otherwise healthy individuals into unnecessary and invasive medical procedure, i.e. RT-PCR and vaccination with an EUA only and unlicensed product that won’t have further safety and testing analysis available until the end of 2023.”

Meanwhile, human rights group Big Brother Watch organized a crowd funder to support the legal challenge to the implementation of COVID vaccine passports. Warning of “segregation” and “checkpoint Britain,” the group wrote that such passports would “create a society where the poorest, the most marginalised, and anyone who does not comply with unprecedented demands for medical interventions could be denied basic socio-economic opportunities and afforded fewer liberties than their neighbours, colleagues and fellow citizens.”

“A year since the nation was put into a lockdown, rather than emerging from this hardship with renewed hope and liberty, instead we risk emerging under the shadow of deeper injustice, division and discrimination.”

These concerns have been previously bolstered by a dire warning from Dr. Michael Yeadon, the former VP of vaccine maker Pfizer. Yeadon wrote that “you MUST object and find ways to prevent a vaccine passport system from coming into being. By any and all means necessary.”

Such passports had a “potential for utterly totalitarian control of the entire population forever lies like a worm at the centre of this beyond-Orwellian future.”

In addition, these warnings have been supported by the Council of Europe (of which the U.K. is a part), which ruled in February that measures such as mandatory vaccines or vaccine passports, as well as any discrimination against those who did not take the vaccine, would be a breach of human rights.

An explanatory note to section 7.5.1 of Resolution 2361, read: “Vaccination certificates should not be used as a “vaccination passport” (at borders, in aviation, or for access to services). Such use would be unscientific in the absence of data on the effectiveness of the vaccines in reducing transmission, the length of any acquired immunity, as well as the percentage of ‘failure’ to produce immunity due to new variants, viral load and delayed second doses. Such use would also pose privacy concerns, and, taking into account the limited availability of vaccines, may perpetuate and reinforce exclusionary and discriminatory practices.”

The resolution stated vaccination certificates should only be used “for their designated purpose of monitoring vaccine efficacy, potential side-effects and adverse events.”