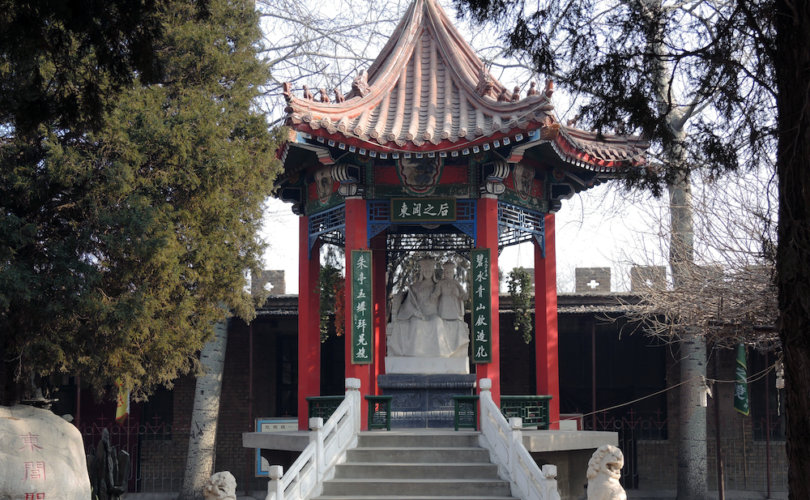 FRONT ROYAL, Virginia, November 9, 2018 (LifeSiteNews) ― A well-known American advocate for human rights in China believes that the recent destruction of two Catholic shrines is evidence that the recent pact signed by China and the Holy See is hurting Chinese believers.

The shrines were named Our Lady of the Seven Sorrows, which was in the village of Dongergou, in China’s Shanxi province, and Our Lady of Bliss, or Our Lady of the Mountain, in the Guizhou province’s Anlong county. Popular with members of both China’s underground Catholic Church and the government-controlled Chinese Catholic Patriotic Association, the shrines were destroyed weeks after the Vatican signed a private agreement with China’s Communist government.

Steven W. Mosher, president of the Population Research Institute, told LifeSiteNews that this destruction indicates that the China-Vatican agreement only served the ends of the anti-Christian government.

“ … The new Sino-Vatican Agreement is working out precisely the way that the Chinese Communist Party officials who approved it intended it to,” he said via email. “It distracted international attention from the ongoing persecution of the Church in China by appearing to give the imprimatur of the Vatican to the Catholic Patriotic Association.”

“All the while Catholics throughout China were being put under a new set of onerous regulations that restrict all activity to a few ‘authorized places of worship,’” he continued. “And the destruction of shrines and churches, and the arrest of ‘unregistered’ clergy, continues apace.”

Four underground Catholic priests of China’s Hebei province,  Fathers Su Guipeng, Zhao He,  Zhang Guilin, and Wang Zhong, are reportedly in police custody. Asia News wrote that the priests are now being “indoctrinated” in the religious policies of the government because they have refused to register with the Patriotic Association.

Mosher, the author of Bully of Asia: Why China's Dream is the New Threat to World Order, told LifeSiteNews that he once visited Our Lady of the Seven Sorrows.

“My daughter, Hannah, and I visited the Marian Shrine in Dongergou in Shanxi province in 2009,” he said.

“The shrine sits — sat — on top of a hill not far from the Dongergou Church. The path up to the shrine was lined with the Stations of the Cross, which we made as we slowly prayed our way up to the top,” he continued.

“The main approach to the shrine was a wide boulevard, flanked on both sides by large statues of angels. The shrine itself, which was built long before the Communists came to power, was in the (Chinese) traditional style, with red pillars and a a green tile roof with uplifted eaves.”

Mosher said that although he and Hannah were there on a weekend, there was a steady stream of pilgrims.

“I was told by the parish priest that on Our Lady's feast days the crowd would be in the tens of thousands. And would come from all over northern China,” he recalled.

Mosher described the architecture of the shrine as “a beautiful example of what might be called architectural “enculturation,” even “sinicization,” which both the Vatican and China recently agreed was “appropriate and necessary.”

“But apparently it wasn't ’enculturated’ or ‘sinicized’ enough for the Communist Party leaders,” he added darkly. “It had to be razed to the ground.”

The reason given for the destruction of Our Lady of the Seven Sorrows was that it had too many statues. Mosher finds this excuse “laughable.”

“The landscape of China is littered with statues, mostly of Communist Party leaders like Mao Zedong and Xi Jinping,” he said.

“The problem was that these were statues of angels, of saints, and of the Blessed Mother herself. The bottom line is that the Communists hate any other religion than their own quasi-religious cult of Communism.”

But an alternative explanation is corruption and greed. Mosher suggested that local officials may have seen the nationwide crackdown on Catholics as an opportunity to seize this valuable land outside Shanxi’s capital city of Taiyuan and sell it to a local developer.

“Most of the proceeds would have wound up in their own pockets,” Mosher said.

‘This Pope, unlike his predecessors, clearly doesn't understand China’

The mysterious agreement between China and the Holy See has still not been made public. Mosher believes this is because the pact is a “huge embarrassment” to the Vatican diplomats who signed it.

“This Pope, unlike his predecessors, clearly doesn't understand China,” Mosher said. “He has approved a deal with the Chinese Communist party leaders that will result in what Cardinal Zen has said will be ‘the annihilation of the real Church in China.’”

No lesser figure than Cardinal Pietro Parolin, the Vatican Secretary of State, tried to convince Mosher in May that the deal was necessary to “avoid a schism in the Church.”

“This is of course true, although not in the sense that the good Cardinal meant it,” the human rights activist told LifeSiteNews.

“There is, indeed, little chance of schism under the new agreement because once the real Church in China has been completely annihilated, the entire Church — its bishops, priests, laity, and properties — will be under the total and complete surveillance, control, and administration of the Party's United Front Department,” Mosher continued.

“Which will then, as it did under Xi Jinping's predecessor, the brutal Chairman Mao, seek to gradually strangle it out of existence.”

Xi Jinping is the de facto dictator of China, being the General Secretary of China’s Communist Party, the President of the People’s Republic, and the Chairman of the Central Military Commission. In short, most of the political power in China rests in Xi Jinping’s hands.

Mosher is very concerned for those Catholics who have already been arrested.

“Catholics aren’t being fed to the lions yet — at least as far as we know,” he said, “but what is happening to those arrested and thrown into China’s many ‘black jails’ — secret places of incarceration — may be just as bad.”