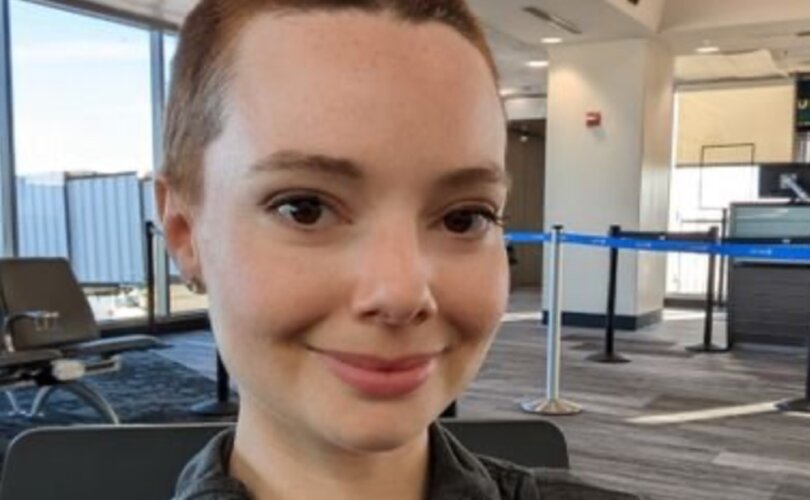 (LifeSiteNews) — A woman who once attempted to live as a man recently spoke out against the use of puberty blockers on children, warning against their long-term side effects and motivations behind pushing so-called “gender affirming care” on children.

Cat Cattinson, a musician and molecular biologist who formerly “identified” as a man, told Laura Ingraham on Fox News that she was “grateful I was not affirmed” during her years of gender confusion, as she explained some of the long-term side effects of hormonal suppression.

“Puberty blockers have been used for other conditions before gender dysphoria, but there have never been any clinical trials or controlled studies on their use in children with gender dysphoria,” Cattinson said in the interview. “Given that they’re administered later in this cohort, there are some increased risks such as osteoporosis, stunted brain development, and infertility.”

As an adult, Cattinson used hormones but never underwent surgery to “affirm” her gender confusion. She expressed gratitude that, because her “transition” was delayed due to the genuine affirmation of her God-given body by her parents and doctor, she was spared the worst that drugs and surgery could have done.

“If I had been [affirmed], then the side effects after de-transitioning probably would have been a lot worse,” she reflected. “I could be infertile. I could have had a hysterectomy, a mastectomy, so I’m grateful I was not affirmed, because it ended up in me preserving my health and fertility.”

When pursuing male hormones, Cattinson said that she was prescribed the drugs after a 30-minute phone call with a doctor at Planned Parenthood. She picked up the blockers the same day, saying that “it’s very easy to get these hormones these days, and I’ve heard from underage transitioners that they were immediately affirmed, and it was extremely easy for them to receive care [sic] as well.”

“Planned Parenthood is one of the organizations in the U.S. that supplies gender affirming care, and they do telehealth, so it’s possible to be prescribed over the phone, which is what happened with me,” Cattinson explained. “They also say on their website that they will prescribe the first appointment without a letter from a mental healthcare provider.”

Since the overturning of Roe v. Wade, the abortion giant has begun emphasizing its “gender affirming care” as abortion regulations take effect across the country. Conservative commentator Liz Wheeler revealed in April that Planned Parenthood originally coined the phrase “don’t say gay,” which has recently been adopted as a term to describe Florida’s legislation standing between children and LGBT indoctrination. Wheeler argued that the organization pushed the phrase into mainstream media to further promote “gender affirmation,” a twisted business that has proven incredibly profitable for Planned Parenthood.

According to the website, puberty blockers are provided for adults and children ages 16-17 who obtain parental consent.

READ: Even the New York Times is worried about the irreversible damage of puberty blockers

However, the abortion provider is not the only medical-affiliated organization to earn massive amounts of money from “gender affirming care.”

“I think there’s some invested interest from plastic surgeons,” Cattinson told Ingraham. “They make a ton of money from the surgical procedures, and then of course the pharmaceutical companies are funding research into gender affirming care.”

The young woman brought up the example of Jack Turban, a professor and paid consultant for LGBT advocacy groups, as “one of the most prominent researchers into gender affirming care” who is “being funded by Arbor Pharmaceuticals” which produces triptorelin, “one of the common puberty blockers that’s prescribed.”

Although widely known and cited for his work, Turban has also received widespread criticism for faulty research that clearly pushes for the approval of puberty blockers as a “treatment” for children suffering from gender dysphoria.

READ:  Detransitioners share regrets about becoming ‘transgender’ as teens during school board meeting