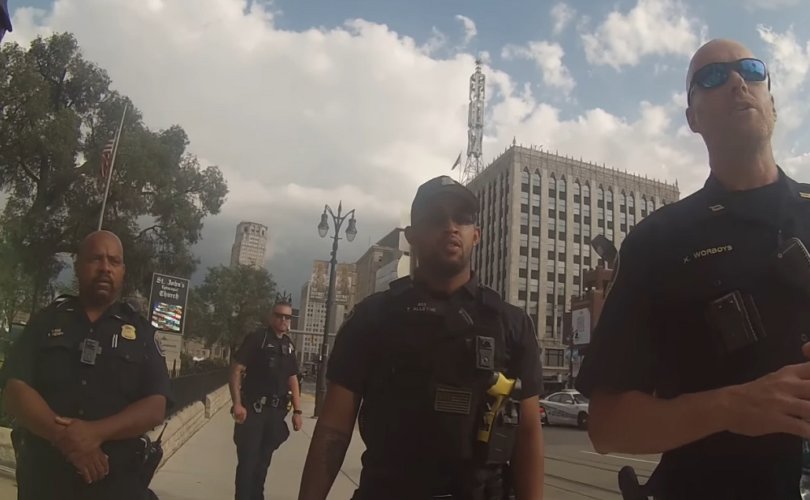 August 1, 2019 (Created Equal) — This week, on Tuesday and Wednesday, Created Equal protested at the Presidential Debate in Detroit, MI. What we encountered from Detroit police was nothing short of police state tactics used to censor our pro-life views. In the name of “safety,” our rights were routinely violated several times by law enforcement eventually culminating in the handcuffing of Created Equal President Mark Harrington.

On at least four different occasions in the span of a few hours, our pro-life views were forcefully suppressed by Detroit police while other more politically correct speech was protected.

Police forced us to conduct our outreach several blocks away from the Fox Theatre and nowhere near persons who came to attend the debate.

Mark Harrington said, “By threat of arrest police compelled us to be penned up in nowhere land while more liberal protesters were permitted to express themselves undeterred. False accusations of trespass, disorderly conduct, and violating a legal order, among other equally spurious allegations, were used to bully us into submission. We are now evaluating our legal options in response to this blatant infringement of our First Amendment rights.”

Detroit is a liberal, pro-abortion bastion. At one point an officer said his orders to restrict us “came from on high.” In other words, the city of Detroit was out to protect pro-abortion presidential candidates from protesters.

Created Equal is a national anti-abortion organization that focuses on training students to be pre-born defenders by using a traveling photo exhibit to show as many students as possible what abortion does to preborn children.  Placing abortion in the broader context of human equality, the project attempts to create debate on campus to influence America's future decision-makers and leaders.

Published with permission from Created Equal.