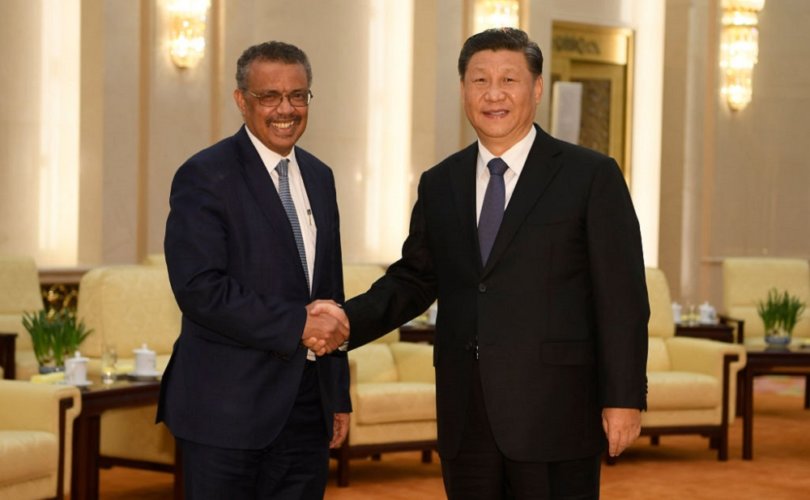 Tedros Adhanom, director General of the World Health Organization (L), shakes hands with Chinese president Xi Jinping before a meeting at the Great Hall of the People on January 28, 2020 in Beijing, China.Naohiko Hatta - Pool / Getty Images

April 7, 2020 (LifeSiteNews) – A British think-tank says the communist Chinese regime should pay nations devastated by the coronavirus trillions of dollars in damages should they be found guilty of withholding information about the severity of the virus.

The report states that the People’s Republic of China (PRC) or Chinese Communist Party (CCP) deliberately covered up the true extent of the coronavirus as it did in 2002–03 with the SARS outbreak.

“The CCP sought to conceal bad news at the top, and to conceal bad news from the outside world. In doing so, Beijing has repeated many of the mistakes it made in 2003, when it obstructed the flow of information around the SARS crisis, and in doing so made the crisis worse,” says the report.

“The truth is that China is responsible for COVID-19 — and if legal claims were brought against Beijing they could amount to trillions of pounds.”

“In order to preserve the rules-based international system and to protect taxpayers from punitive liabilities, the world should seek to take legal action against the PRC for the breaches of international law and their consequences,” the report states.

The HJS report makes the argument that the PRC was bound by “international law, in the form of the International Health Regulations [2005], to report timely, accurate and detailed public health information” in regards to the outbreak of the virus.

Instead of doing this, the HJS report says, the PRC failed in its international obligations to report the severity of the disease, which could be interpreted as “a deliberate act of mendacity.”

The report says the coronavirus spread much faster than it would have otherwise, because China prevented people from leaving its borders to stop the spread and covered up its severity.

The economic impact due to countries around the world being stuck in lockdown is in the trillions of dollars, and the HJS report concludes that China should be held accountable.

According to the report, the CCPs carelessness has cost the G7 at minimum US$4 trillion “and the wider world a presently incalculable sum.”

“In order to preserve the rules-based international system and to protect taxpayers from punitive liabilities, the world should seek to take legal action against the PRC for the breaches of international law and their consequences.”

The report touts ten possible legal avenues nations might pursue in order to seek compensation from the CCP:

The report gives a detailed chronological account of events leading up to March 11, which is the day the World Health Organization (WHO) officially declared the coronavirus a pandemic.

Expert on China Steven Mosher, head of the Population Research Institute, recently said in a blog post on LifeSiteNews that the virus comes from China:  “China coronavirus may have been under study at a Wuhan bio lab, that it somehow escaped.”

Mosher has also blasted the CCP as not truthful, stating in another blog post on LifeSiteNews that no one should believe China’s official death count from the virus or that the Chinese ever had it under control.

Nations sounding the alarm that China is to blame for the coronavirus outbreak became louder in March, in particular after the Chinese embassy in France suggested that the virus could have come from the United States military.

U.S. President Donald Trump strongly repudiated the charge, insisting, “The world is paying a very big price for what they did.”

Some world leaders, however, such as Canada’s Prime Minister Justin Trudeau, who has an affinity for the “basic dictatorship” of China, have denied mounting evidence that China has been lying, in stark contrast to the U.S.

In January, it was reported that the U.S. Peace Corps has officially cut its ties with China. Florida senator Rick Scott said about this that “there's no reason we should prop up our adversaries with U.S. tax dollars.”

Recently, reports have surfaced that many nations are declining medical equipment from China after much of it has shown to be faulty. Spain, for example, sent back coronavirus test kits it purchased from China after the Spanish found many of them defective.

China says it has sold nearly 4 billion masks since March to many nations around the world “to stem widespread fears over the quality of medical exports.”

Recently, the bishop emeritus of Hong Kong, Cardinal Joseph Zen, questioned the WHO’s credibility after he called out one of the group’s officials for not answering a reporter’s question about Taiwan’s status in the organization.

Trump has also blasted the WHO, saying today in a Twitter message that “The W.H.O. really blew it. For some reason, funded largely by the United States, yet very China centric. We will be giving that a good look. Fortunately I rejected their advice on keeping our borders open to China early on. Why did they give us such a faulty recommendation?”

Despite many around the world questioning the integrity of the CCP and its track record on human rights, the United Nations Human Rights Council recently appointed China among its members.