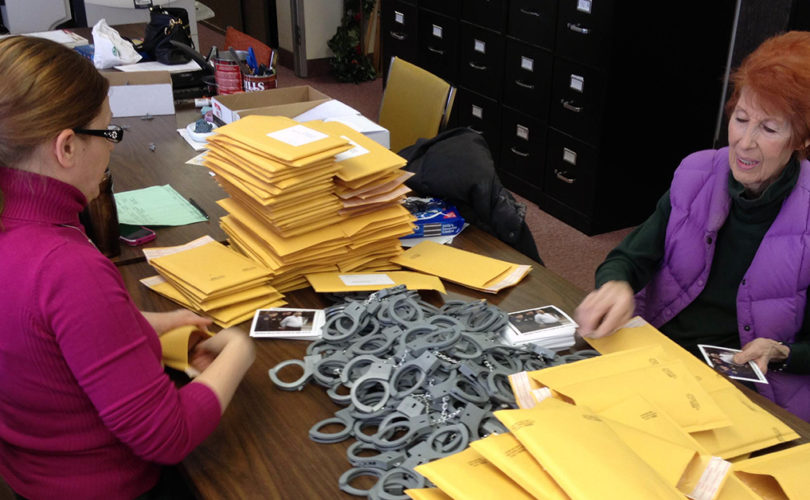 “As our team processes more than one million reports each week, we occasionally make a mistake. In this case, we mistakenly removed this profile, and we apologize for that. The profile was restored as soon as we were made aware of it.”

At approximately 3:40 on Wednesday afternoon, in the middle of an interview with LifeSiteNews, Scheidler reported that his Facebook account had been suspended. While further information is not available, Scheidler shared his suspicion that his posts on the League's newest project — all of which are public — were the cause of the suspension.

On January 22, the 42nd anniversary of the Supreme Court's Roe v. Wade decision, the Pro-Life Action League sent care packages with handcuffs to every abortion clinic in America. The goal was to highlight the often-illegal acts that take place at those clinics.

The packages included a picture of arrested abortionist Naresh Patel, a pair of plastic handcuffs, and a note from Scheidler reading, “Could you be next? If you want to get out of the abortion business, give me a call.”

Scheidler's cell phone number was included in the package, which he reported on Facebook — prior to the account's suspension — had led to at least a dozen harassing phone calls and text messages from abortion supporters.

Despite those calls, however, as Scheidler was telling LifeSiteNews moments before his account was suspended, “So far, this project is working really well.”

“This has allowed me to say more to pro-lifers, and others — including the media — about the general corruption and illegal activity going on in the abortion industry. I was also able to talk with an abortion clinic owner for 10 minutes, because of our project, who said that it is a dark and cruel world,” said Scheidler. “She said we should send her diapers, not handcuffs, for their pre-natal care, and I told her that I would do so.”

“I also got a call from an abortion nurse in North Carolina who said she wants to get out of the abortion business, and from a woman in another southern state who said she's the wife of the doctor we sent the handcuffs package to, and that she talked him out of doing abortions two years ago, 'for the sake of his soul,'” explained Scheidler.

Scheidler said that the effort has gotten tremendous media attention, including talk radio, pro-life outlets, and even Cosmo. Scheidler said he spoke with the mainstream magazine for 40 minutes.

This is a developing story…