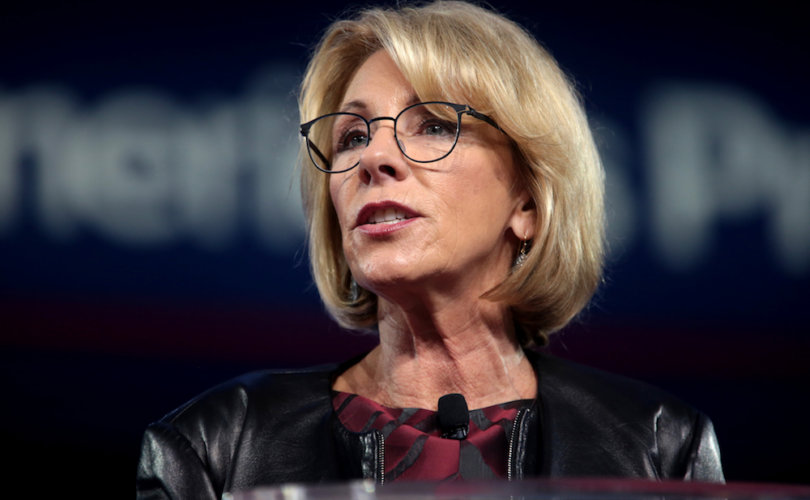 March 10, 2017 (LifeSiteNews) — Pro-family advocates who oppose LGBTQ indoctrination in public schools are asking for a meeting with Education Secretary Betsy DeVos after she held two one-hour sessions with homosexual, bisexual and “transgender” activists at the Department of Education.

“Representatives from a trio of LGBT organizations and families with transgender kids met Wednesday with Education Secretary Betsy DeVos in the aftermath of the Justice and Education Departments revoking Obama-era guidance assuring transgender students access to the bathroom consistent with their gender identity.”

DeVos’ pro-LGBTQ leanings have been covered in-depth by LifeSiteNews (and The New York Times) but were largely ignored by other pro-family organizations, congressional Republicans, and conservative media throughout her confirmation process.

Many social conservatives were stunned that DeVos reportedly opposed Trump’s reversal of Obama’s nationwide pro-transgender school mandate. She now defends the policy change, telling CPAC last month that the mandate was a “very huge example of the Obama administration’s overreach to suggest a one-size-fits-all, federal government approach, top-down approach to issues that are best dealt with and solved at a personal level and a local level.”

DeVos issued this statement, posted on the Department of Education website, after the “compelling” LGBTQ meetings:

“I am grateful for the opportunity to speak directly with these families, students and community leaders about their concerns, thoughts, fears and suggestions. Every school and every school leader has a moral responsibility to protect all students and ensure every child is respected and can learn in an accepting environment. I remain committed to advocating for and fighting on behalf of all students. Today's meeting was compelling, moving and welcomed, and part of an ongoing dialogue with families and students throughout the country.”

Among those meeting with DeVos were the following LGBT activists, the Blade reported:

The “closed press” meetings were arranged by Equality Michigan and were not announced beforehand by the LGBT organizations, the Blade reported. The Education Department did list the meetings as part of DeVos’ schedule for March 8: “10:00 a.m. Secretary DeVos will meet with Equality Michigan leadership and parents. Closed press.”

The Blade reported: “Discussion consisted of two consecutive meetings — one between DeVos and transgender families, the other between DeVos and representatives from LGBT groups — which both [lasted] about an hour each, sources familiar with the meeting said.”

Joining the representatives from the three LGBT activist groups at the meeting were DeVos and four Education Department officials, according to the Blade.

Linda Harvey, president of Mission America and a longtime Christian opponent of LGBTQ activism in schools, told LifeSiteNews that DeVos’ extended meetings to hear the complaints of homosexual and transgender activists are a “telling sign of weakness.” Harvey said DeVos is “in danger of being manipulated by radical, anti-child sexual corruption groups.”

“So is Betsy DeVos at least willing to meet with pro-family representatives who will present her with the dangers and health risks that children face from the aggressive LGBTQ agenda?” Harvey asked.

A new book published by Mass Resistance, The Health Hazards of Homosexuality, details the medical and psychological risks of homosexual behavior.

Conservatives outside a small network of those fighting the “gay” and “trans” lobbies have generally ignored Republican DeVos’ atypical pro-LGBTQ advocacy. Instead, they have focused on her championing of school choice, a longtime conservative policy goal to reform public education.

Barack Obama’s administration did not hold special meetings with conservative critics after the many policies instituted by the liberal Democrat in his eight years as president. In fact, conservative complaints against Obama’s social policies were largely ignored throughout his eight-year tenure, as he went on to promote homosexuality and gender confusion at home and abroad more than any president in American history.

Obama even famously lit up the White House in the “rainbow colors” symbolizing LGBTQ activism to celebrate the Supreme Court’s de facto imposition of national homosexual “marriage” on June 26, 2015.

LGBTQ activist: “We will not budge”

“We highlighted the pervasive violence and discrimination that the majority of transgender students face across the country, including being prevented from using their correct name and pronouns and appropriate school facilities,” Byard said. “We told DeVos about the immediate impact of withdrawing the [federal pro-transgender-students] guidance, and discussed ways that she might be able to mitigate the pain, fear, and confusion that decision has caused. We described the years of experience, research and careful policy-making behind the original Title IX guidance and all of the emerging best practices it helped to publicize.

Byard said defiantly that through the meeting “we ensured that DeVos heard – directly from us – that we will not budge or compromise when it comes to the full support and protection that all of our children, including LGBTQ youth, deserve from this administration, from the Department of Education and from its Office for Civil Rights.”

Ex-“gay” activist: What about us?

“She’s had two meetings with gay and trans activists. Can we have at least have one?” said Quinlan, who was once a “gay” activist but is now president and founder of the Center for Garden State Families, based in New Jersey. In an interview with LifeSiteNews, he demanded “equal time” with the new Secretary of Education.

Quinlan called on DeVos to “do her research” to become educated fully about the subject of gender identification and homosexuality, and not just hear from one special interest lobby.

“This is too critical a subject for kids just to hear only from the gay and trans lobbies,” he said. “Betsy DeVos must not allow herself and her office to be used to perpetuate the notion that homosexuality is innate, and that boys can become ‘girls,’ and vice versa. They can’t.”

“For goodness’ sake, these impressionable kids are destroying their bodies through hormones and surgeries in pursuit of radical transgender ‘identities,’” he said. “The last thing they need is one-sided misinformation regarding sexual development and gender.”

One of the main talking points of LGBTQ activists responding to Trump’s reversal of the Obama transgender policy is that Title IX law (banning “sex discrimination”) requires pro-transgender accommodation in areas like bathrooms for gender-confused students.

Laurie Higgins, a cultural issues writer with Illinois Family Institute, told LifeSiteNews that Keisling is wrong in his claim that the DoE is “statutorily required to enforce” Obama’s “fanciful reinterpretation of Title IX.”

She said the Obama federal “guidance” “would have mandated that schools sexually integrate restrooms and locker rooms.”

“It’s an inconvenient fact for Kiesling that Title IX specifically states that schools may maintain the commonsense practice of sexually segregating boys and girls in restrooms and locker rooms” to protect their privacy and safety, Higgins said.

She disagreed with Kiesling‘s claim that Trump’s move to rescind the Obama bathroom mandate is “an arbitrary, political, ideological decision to hurt trans youth.”

“There could be no more arbitrary, political, ideological (and science-denying) decision than Obama’s unjust diktat that would have hurt all children by promoting lies as truth,” she said, adding that co-ed restroom and locker room policies “teach all children the lie that objective, immutable biological sex as revealed in physical embodiment as male or female has no intrinsic meaning.”

Higgins said another lie that “transgender-inclusive” policies teach children is that “in order to be compassionate and inclusive, they must relinquish their privacy.”

Brian Camenker, president of Mass Resistance, told LifeSiteNews that DeVos, as a longtime LGBT advocate, “is turning out to be every pro-family parent's nightmare.

“Don't hold your breath waiting for her to meet with any ex-gays or ex-transgenders,” Camenker said.

To express your concerns to the White House go here