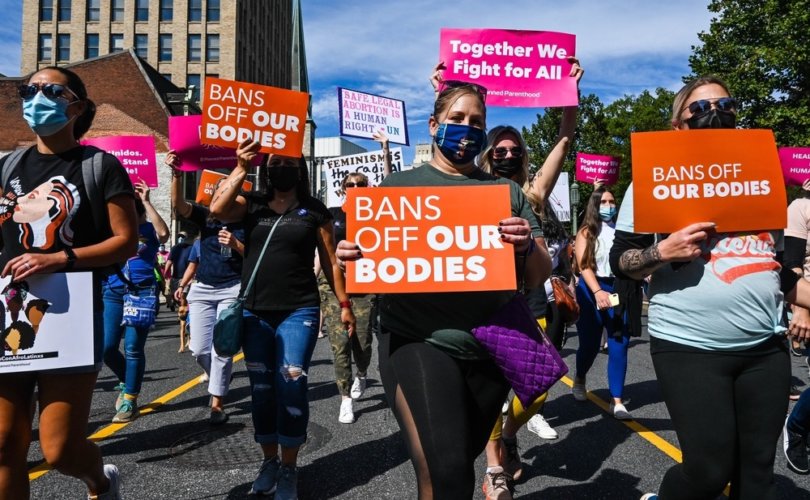 WASHINGTON, D.C. (LifeSiteNews) — The Biden administration’s Department of Homeland Security (DHS) is warning about an escalation of violence from pro-abortion extremists if the U.S. Supreme Court overturns Roe v. Wade, according to a leaked memo obtained by Axios.

In the unclassified memo by the DHS’ intelligence arm released May 13, the agency noted that law enforcement agencies are currently looking into violent threats by pro-abortion activists angered by the possibility the Supreme Court could overturn the federal “right to abortion” established in Roe v. Wade.

According to Axios, police “are investigating social-media threats to burn down or storm the Supreme Court building and murder justices and their clerks, as well as attacks targeting places of worship and abortion clinics.”

The memo stated the violent threats have targeted “Supreme Court Justices, lawmakers and other public officials, as well as clergy and health care providers.”

The threats are reportedly “likely to persist and may increase leading up to and following the issuing of the Court’s official ruling.”

The memo didn’t cast blame exclusively on the pro-abortion side, however.

The document also linked the predominately Christian, conservative pro-life movement to white supremacy, highlighting historical violence against abortionists and arguing that “Some racially or ethnically motivated violent extremists’ embrace of pro-life narratives may be linked to the perception of wanting to ‘save white children’ and ‘fight white genocide.’”

The suggestion that white supremacists may be attracted to the pro-life cause to “save white children” comes despite the fact that an estimated 80% of Planned Parenthood abortion facilities are within walking distance of minority neighborhoods, according to a 2015 report by the Center for Urban Renewal and Education.

Meanwhile, unborn black babies are about five times as likely to be killed via abortion than white babies.

Black women are five times more likely to have an abortion than white women.

We can no longer ignore this evil.

However, the DHS memo emphasized that “extremist acts could come from abortion-rights proponents” as the Supreme Court appears poised to overturn the federal “right to abortion.”

The memo was also careful to note that violent rhetoric alone does not necessarily constitute “domestic violent extremism.”

“The mere advocacy of political or social positions, political activism, use of strong rhetoric, or generalized philosophic embrace of violent tactics does not constitute domestic violent extremism or illegal activity and is constitutionally protected,” the memo stated.

A DHS spokesperson told The Daily Wire on Wednesday that the agency “is committed to protecting Americans’ freedom of speech and other civil rights and civil liberties, including the right to peacefully protest.”

“DHS is also committed to working with our partners across every level of government and the private sector to share timely information and intelligence, prevent all forms of violence, and to support law enforcement efforts to keep our communities safe,” the spokesperson added.

According to the leaked opinion, the Supreme Court is poised to rule in favor of Mississippi’s 15-week abortion ban by overturning both Roe v. Wade and Planned Parenthood v. Casey (1992), which upheld Roe.

Pro-abortion advocates have responded to the leak by unsuccessfully attempting to codify abortion up to the moment of birth in federal law, engaging in protests, and in some cases vandalizing pro-life centers and Catholic churches.

Pro-life Supreme Court Justice Clarence Thomas condemned the leak of the draft opinion and subsequent criminal activity by some pro-abortion activists, stating that the justices will not be “bullied.”