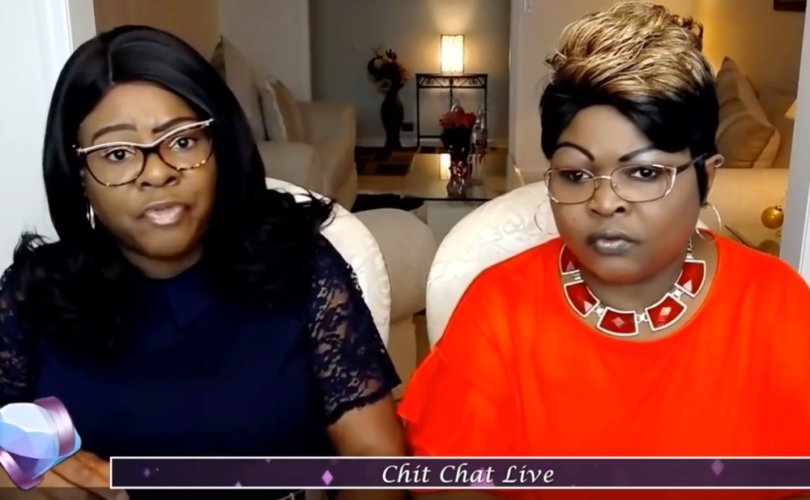 The main topic of the video was not abortion but illegal immigration, specifically the growing calls from several Democrats, including Sens. Elizabeth Warren and Kirsten Gillibrand and socialist congressional nominee Alexandria Ocasio-Cortez, to abolish the U.S. Immigration and Customs Enforcement (ICE). The calls are the latest development in the controversy over the federal government temporarily separating parents and children who illegally crossed the southern border for the duration of criminal proceedings.

Early on in the video, Lynette “Diamond” Hardaway blasted the “Dummy-crats” for “fighting in the streets hard to abolish ICE, but they did not fight to end slavery, to abolish slavery.” Shortly afterward, Rochelle “Silk” Richardson followed up by declaring that “Democrats fight for separation of babies from their mothers’ breasts, but refuse to fight for the innocent children being separated from their mothers’ womb.”

The bloggers’ observation follows several prominent pro-abortion Democrats, and even the nation’s leading pro-abortion lobbying groups, denouncing the Trump administration over the scandal using language strikingly similar to what pro-lifers say about abortion.

Jesus Christ “did not say ‘let the children suffer,’” failed presidential nominee Hillary Clinton said of “this cruelty.” House Minority Leader Nancy Pelosi decried the “barbaric and unacceptable policy of ripping children from the arms of their parents at the border.” Rep. Maxine Waters invoked the Bible to declare she was “on the side of understanding that if we can’t protect the children, we can’t protect anybody.”

Planned Parenthood Federation of America tweeted that “all of the fathers and parents who have been separated from their children at borders” were in “our hearts and minds” for Father’s Day. NARAL President Ilyse Hogue decried the “inhumane” and “evil” “torture” of “these children.

Planned Parenthood, NARAL, and various Democrats and pro-abortion pundits similarly attacked President Donald Trump in May for impugning the humanity of the violent gang MS-13 by calling them “animals.”

“As a Christian, I am called to love people – not to eliminate punishment for wrongful actions,” Radiance Foundation founder Ryan Bomberger wrote last month, addressing the intersection of the pro-life movement and immigration policy. “I don't support families being separated at the border unless there is verifiable abuse or neglect. Many parents put their children in peril by illegally crossing when they could cross legally. This latest political media tantrum is merely a continuum of resistance against having laws that prescribe what legal immigration is.”