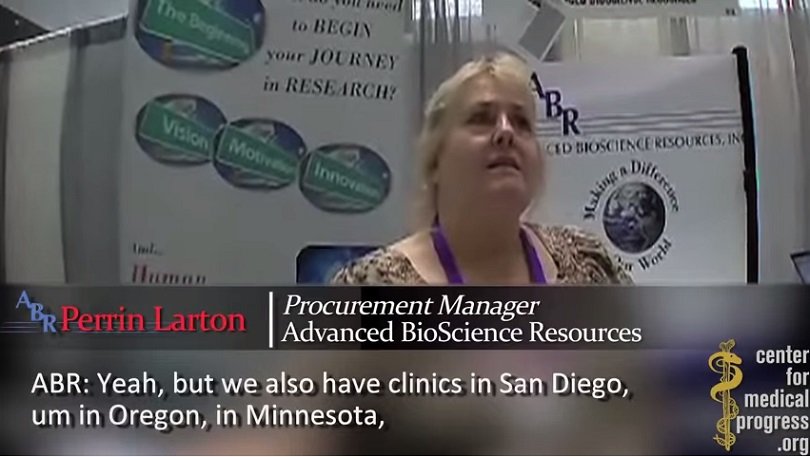 MINNEAPOLIS, MN, September 2, 2015 (LifeSiteNews) – Somebody in the abortion industry is breaking a Minnesota law that bans the sale or donation of aborted babies' body parts.

That's the conclusion of numerous elected officials, who are renewing calls to investigate Planned Parenthood in the wake of undercover videos about the harvesting and sale of fetal organs and tissue.

Dozens of Republican state legislators asked Democratic Gov. Mark Dayton to investigate the abortion provider after the Center for Medical Progress released videos detailing the little-known practice. The sale or donation of fetal organs or tissue is illegal under state law.

However, in the latest video released by CMP, the head of a biological company says it has an abortion facility operating in Minnesota.

Perrin Larton, the Procurement Manager for Advanced Bioscience Resources, Inc. (ABR), says she procures fetal organs and tissue from abortion facilities “in San Diego, in Oregon, in Minnesota, and soon we will be starting in New Jersey and Philadelphia.”

At the heart of the issue is a Minnesota state law that requires abortion facilities to dispose of aborted babies' bodies “by cremation, interment by burial, or in a manner directed by the commissioner of health.” To do otherwise is a misdemeanor.

Thus, ABR's research would be illegal in any case.

As it turns out, ABR has been registered as a non-profit in the state of Minnesota since April 2009. Its location is listed as 1010 N. Dale St. in St. Paul.

A former ABR employee, Deborah Heap Tierney, listed her occupation on LinkedIn as “procurement specialist” at the company, in Minnesota, from February 2009 – two months before ABR's business filing as a nonprofit – to November 2009.

Investigators want to know: If organ donation was illegal, what was she procuring, and who acted as ABR's supplier?

“Why is the nation's largest and oldest fetal procurement company in Minnesota in the first place, let alone four miles from Planned Parenthood Minnesota?” said State Representative Mary Franson, R-08B, in a statement sent exclusively to LifeSiteNews. “Minnesota law requires a dignified and sanitary disposal of fetal remains. Sales or donation of fetal remains is not permitted.”

“Advanced Bioscience Resources admits in a recent video that they procure fetal tissue in Minnesota. That alone is illegal and criminal,” State Rep. Kathy Lohmer, R-39B, told LifeSiteNews. “I am calling on Ramsey County Prosecutor John J. Choi to investigate these claims and if true to pursue criminal charges against them.”

But what about Planned Parenthood? Did it tell the truth when it denied ever having participated in ABR's organ harvesting business?

State Rep. Matt Dean, R-38B, sent a letter on July 24 to Sarah Stoesz, the president and CEO of PPMNS, to find out. He asked for the affiliate's “official policy on the donation of fetal tissue.”

Echoing Cecile Richards, Stoesz replied on August 3, “I want to be absolutely clear.” Although Planned Parenthood “believes strongly in the value of fetal tissue research…PPMNS does not participate, and has never participated, in any type of tissue donation program that would involve providing fetal remains (with reimbursement of expenses or otherwise) to any commercial vendor or to any other entity for the purpose of medical research.”

When asked for official policy, she responded, “PPMNS does not and never has donated tissue of any kind and, accordingly, does not have a policy dedicated to this issue.”

She then said that one of its policies requires that state law be followed on the disposal of aborted babies' remains, and the policy was adopted in 2011. She sent a copy of their policy, which was signed by Stoesz and two other PPMNS officials on July 27 – three days after Dean's letter.

Gov. Mark Dayton accused Republicans of “full-time grandstanding,” saying, “As far as I'm concerned there's no basis for an investigation at taxpayer expense into a private nonprofit organization that has stated they don't engage in those practices here in Minnesota.”

Lt. Gov. Tina Smith – who was part of the Planned Parenthood affiliate's leadership – agrees. Smith is a former vice president for external affairs at PPMNS.

Minnesota House Speaker Kurt Daudt, R-31A today told LifeSiteNews through a spokesperson that the state's Democratic leadership has turned a blind eye to a burgeoning scandal, and justice must be enforced at once.