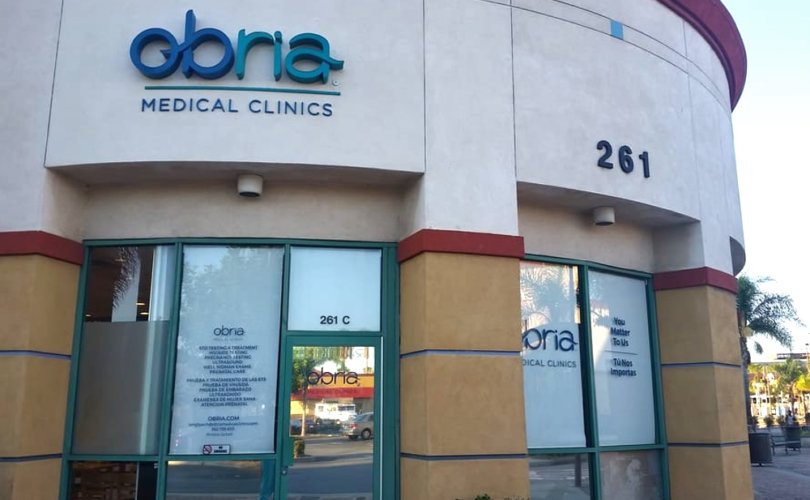 CALIFORNIA, April 5, 2019 (LifeSiteNews) – Did a California pro-life medical group with a Catholic founder and CEO have to compromise its principles to secure millions in Trump Administration funding under a Title X grant?

The department of Health and Human Services (HHS) announced on April 1 that the Obria Group, which bills itself as a pro-life alternative to pro-abortion women’s clinics, had received $5.1 million over three years for use in California.

Kathleen Eaton Bravo, CEO and founder of The Obria Group Inc. and Obria Medical Clinics, responded to the announcement in a press release saying, “Many women want the opportunity to visit a professional, comprehensive health care facility – not an abortion clinic – for their health care needs; today HHS gave women that choice.”

Title X funding requires grantees to provide family planning services, or at least refer for it, that include, among other things, “highly effective contraceptive methods.”

Other pro-life groups which were considered for the same Title X grants were unable to accept the grants due to the contraceptive requirement despite attempts to work with HHS to get around the requirement.

Former Planned Parenthood director now turned pro-life activist Abby Johnson told LifeSiteNews, that Obria would not have received the Title X grant without being required to give out contraception or at least refer for it.

In a follow-up press release about the Title X funding, Obria said that it would use the money to provide family planning services “such as reproductive planning, preventative services, and training in fertility awareness-based methods (natural family planning).”

It did not specify what it meant by “preventative services.”

Nevertheless, Obria states on its website that its clinics “do not provide contraceptives.” Moreover, a spokeswoman for Obria told LifeSiteNews that the organization neither provides contraception nor makes referrals to contraception providers.

Kenny was skeptical that Obria could not refer for contraception and still get the Title X grant.

“If that were true, I would be happy that a pro-life group could get Title X money,” she said.

“But according to the government, that’s not the language in the Title X document.”

Other pro-life health centers concurred. The Pro-Women’s Healthcare Consortium (PWHC) informed LifeSiteNews that they had confirmed that a PWHC-certified health center could not be in compliance with Title X requirement.

“After multiple discussions with the leadership at the Dept. of Health and Human Services, we have confirmed that there is not a way that a PWHC certified center would be in compliance with the current Title X requirements for funding and follow the ethical guidelines the consortium adopted at its inception,” it wrote.

“The consortium members would not refer for contraception for family planning reasons because it is not in the best interests of a woman’s health. There are safer and more effective methods of family planning.”

“There was a meeting yesterday between HHS, Kathleen [Eaton Bravo] and the Obria governing board,” Johnson told LifeSiteNews via email. “It was made clear during that meeting that all CA [California] Obria medical clinics are required and will be referring for contraception. That is a requirement under the Title X rules,” she continued.

“I knew this to be true, because I helped to administer Title X funds when I worked at Planned Parenthood. Title X is a contraceptive management program. At minimum, a referral for any and all forms of contraception is required.”

Johnson indicated that this news would be troubling for Catholics who fund Obria through private donations.

Obria has also received funding from the USCCB’s Campaign for Human Development.

Abby Johnson said donors and patients have other options when it comes to supporting pro-life health care.

“The Guiding Star Project offers authentic women’s healthcare that is in line with Catholic teaching,” she told LifeSiteNews.

“None of our centers refer for, counsel towards or provide any form of contraceptive methods. We believe that a woman’s fertility is a sign of health and should not be “broken” by dangerous hormonal methods.”

The Catholic Church teaches that using contraception is always and in every case wrong because it blocks the marital act from its God-given procreative purpose. It also contradicts the husband and wife’s marriage promise to give themselves to each other, totally and unreservedly — where nothing must be held back, including one’s own fertility.