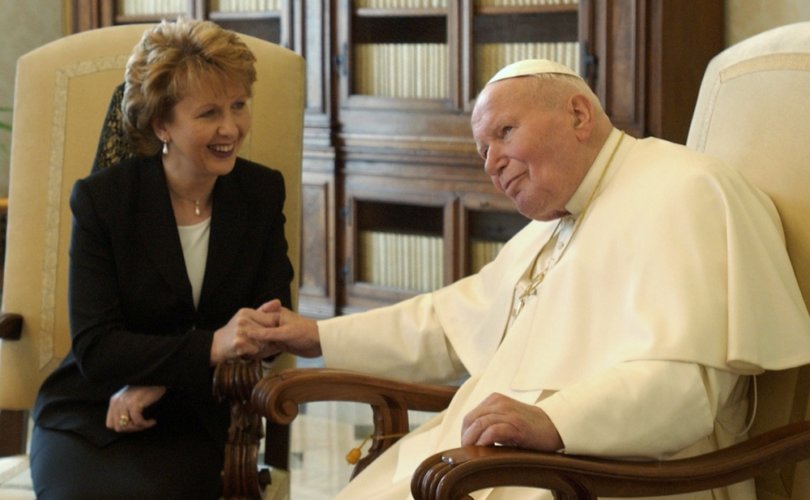 BOSTON, Massachusetts, January 15, 2019 (LifeSiteNews) – Pro-abortion and pro-homosexual former Irish president Mary McAleese, who claims to be Catholic, may have been caught in a lie when she recently told an audience that Pope John Paul II refused to shake her hand.

McAleese, 67, who was president of Ireland, a largely ceremonial position, from November 1997 to November 2011, made headlines last week by claiming that St. John Paul was rude to her because, she insinuated, she was a female leader.

According to Irish Central and the Boston Globe, McAleese spoke at an event sponsored by the Irish American Partnership detailing sexist slights she claimed to have suffered from prelates, including the late pontiff and the late Cardinal Law of Boston.

McAleese alleged that John Paul II refused to shake her hand when they met, shaking her husband’s hand instead. She alleged also that the late pontiff had asked her husband, “Would you not prefer to be the president of Ireland instead of your wife?”

McAleese then claimed she reproved the pope, saying: “You would never have done that to a male president. I’m the elected president of Ireland whether you like it or not.”

However, an Irish newspaper account of the 1999 meeting between the pope and the Irish president — the first meeting she had with the Pope as the president of Ireland — tells quite a different story. According to an Irish Independent story dated February 13, 1999, then-President McAleese shook the pope’s hand.

“The Pope looked frail and walked with the aid of a stick but was clearly in very good form as he held out his hand to greet the President,” the Independent reported.

“Mrs McAleese, her head covered by a fine lace shawl but not her face, shook the outstretched hand firmly and asked the Pontiff if he was feeling better after his flu,” the report continued.

“He assured he was feeling fine, and the two disappeared into the room for a private, one-to-one audience that lasted 10 minutes longer than the scheduled 15.”

According to the paper, their private meeting lasted 25 minutes. Afterward, McAleese said that the pontiff was “intellectually, ferociously agile.” She also said, after this meeting, that she reminded him of his visit to Ireland, then-20 years before, and “raised the prospect” of his next visit.

McAleese indicated in her remarks that she had not met John Paul II prior to this, although she had seen him in during his historic Mass in Ireland’s Phoenix Park.

The Independent article was aptly titled: “Pope’s hand of friendship for the President.”

There is also video footage of then-President McAleese shaking hands with the ailing pontiff during a state visit in 2003.

In her remarks, McAleese apparently repeated her usual attack against the theological writings of St. John Paul II, saying “John Paul II has written of the ‘mystery of women’. Talk to us as equals and we will not be a mystery.”

In Mulieris Dignitatem (1988), John Paul II’s assertion of the dignity and rights of women, the philosopher-pontiff did write of a “mystery of woman.” However, he was using the word as a theological term denoting a hidden spiritual reality, as he does with the “mystery of redemption”, and not to suggest women are somehow inscrutable.

Deeply influenced by the work of St. Edith Stein, who wrote a 20th-century “theology of woman”, John Paul II recognized the role of women in the professions and their part in the “destiny of humanity. In Mulieris Dignitatem, the philosopher-pontiff wrote that

the Church gives thanks for each and every woman: for mothers, for sisters, for wives; for women consecrated to God in virginity; for women dedicated to the many human beings who await the gratuitous love of another person; for women who watch over the human persons in the family, which is the fundamental sign of the human community; for women who work professionally, and who at times are burdened by a great social responsibility […] as, together with men, they are pilgrims on this earth, which is the temporal “homeland” of all people and is transformed sometimes into a “valley of tears”; as they assume, together with men, a common responsibility for the destiny of humanity according to daily necessities and according to that definitive destiny which the human family has in God himself, in the bosom of the ineffable Trinity.

In Letter to Women (1995), John Paul II spoke about what women’s equality looks like, writing, “As far as personal rights are concerned, there is an urgent need to achieve real equality in every area: equal pay for equal work, protection for working mothers, fairness in career advancements, equality of spouses with regard to family rights and the recognition of everything that is part of the rights and duties of citizens in a democratic State.”

In this document, the late pontiff also stated that women’s increased public role will be valuable to society.

Once believed to be a devout Catholic, McAleese has become increasingly critical of the Roman Catholic Church as its influence in Ireland has waned. It is true, however, that as early as 1997, McAleese wrote publicly of her hopes for female ordination. Since then, she has also supported same-sex “marriage” in Ireland and voted unashamedly to repeal the country’s pro-life Eighth Amendment to its constitution.

Last August, an Irish TD (member of parliament) said that people were tired of the former president attracting the limelight and were hoping she would go away and take her animus against the Church with her.

“She was damn glad of the support of the Irish people – as she calls them now ‘bog-standard Catholics’ – when she wanted to get elected,” said Independent Mattie McGrath.

“She used them so, she should now, if she wants to form her own church, go do so and get off the stage.”