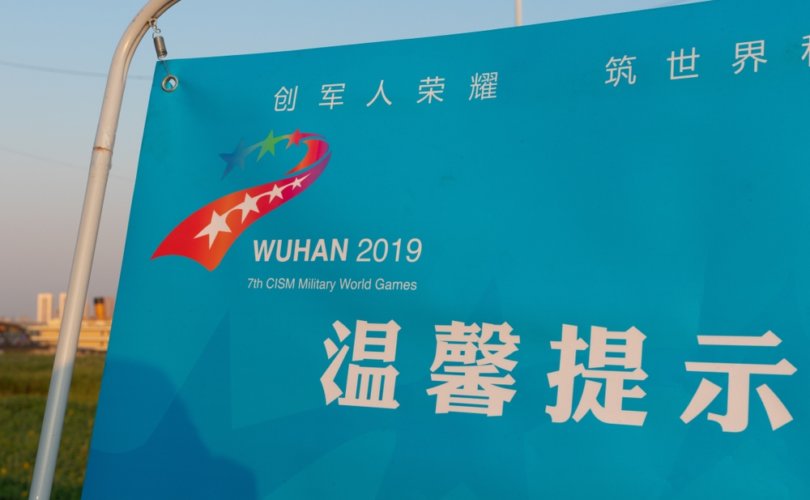 TORONTO, Canada, January 20, 2021 (LifeSiteNews) — A Canadian soldier has reportedly testified that up to a third of military athletes who participated in the World Military Games in Wuhan, China in October 2019 became violently ill.

The unnamed whistle-blower, who was interviewed by Rebel Media’s Keean Bexte and was identified only as a “senior Canadian Armed Forces member,” said that at the “tail-end” of the games, a lot of the athletes became “really, really, sick” with “lung issues, coughing, vomiting, diarrhea.”

“Very odd symptoms, depending on the person,” the solider said.

According to the Rebel Media, there were 176 Canadian soldiers stationed in Wuhan for the Games, and the way the sick—a third of the total contingent of athletes—were quarantined from the others on the long flight home was to put them on at the back of the Polaris jet. Senior ranks decided to end this quarantine when the flight arrived and sent the soldiers to their homes, all over Canada.  Bexte believes that this might be when Covid-19 made its first appearance in the nation.

“This was just a few weeks before the officially recognized first case [of Covid-19] on November 17,” Bexte said.

“When soldiers started asking to be tested, the answer was no,” Bexte said.

“See, if several dozen Canadian soldiers tested positive for the viral antibodies in 2020, having been infected in October 2019, the Chinese would be in very, very hot water,” he continued.

— Article continues below Petition —
PETITION: Reject government control of the internet in Canada
Show Petition Text
6565 have signed the petition.
Let's get to 7500!
Thank you for signing this petition!
Add your signature:
Show Petition Text

“Irrefutable proof that they lied.”

The whistle-blowing soldier stated that the main priority for the Canadian government was not to “admit it” and underscored that none of the 176 athletes were tested.

Instead, the Canadian then-Surgeon General, Major-General A.M.T. Downes, wrote a letter on January 22, 2020, about the outbreak of Covid-19 in Wuhan. The document is called “Potential Exposure to 2019 Novel Coronavirus During 7thMilitary World Games in October 19 in Wuhan, Hubei Province, China.” Addressed to the soldier-athletes who had taken part in the Games, the letter said that the Surgeon General was certain that the number of suspected cases, and the number of countries with suspected cases, would “increase in the next 30 days.”

“They knew all about this, but they weren’t telling you about it,”Bexte said.

Bexte objected to the Surgeon General’s reasoning, pointing out that the first known case of Covid-19 in Wuhan was detected on November 17. The journalist stated that the middle-aged man who had the illness could have been infected “14 days prior to that date,” five days before the Canadian soldier-athletes left the city.

“[Prime Minister] Trudeau wants us to believe that our soldiers were just infected by some random virus in Wuhan, causing critical pneumonia and year-long coughing, but nah,” said the journalist sarcastically.

Apparently, there was nobody on the streets when the soldier-athletes got to Wuhan. Bexte’s military source stated that the soldiers were told that the city of Wuhan had been evacuated and that this was to make it easier for athletes to get to and from the Games. Looking back, he is now shocked by the implications.

“Why do you think the government decided to hide this secret from […] everyone to ignore the geo-political implications of upending the Chinese narrative and, even worse, why would they refuse to give Canadian soldiers the best healthcare available?” Bexte asked.

The journalist said that Canada’s soldiers put their lives on the line for the country, but that Trudeau was too scared to give them a coronavirus test. He believes that the answer to his question is that the Prime Minister “wanted to protect his Chinese buddies.”

“Could you imagine the damage?” his source asks. “I mean, was [the illness] Covid?”

“Literally, your own military the Trojan Horse to spreading this thing.”

Other soldiers around the world reported becoming sick at the Military Games in Wuhan in October 2019. In May a sporting blog called “Inside the Games” stated that close to 10,000 soldiers from over 100 countries took part in the Games and that soldier-athletes from France, Germany, Italy, Luxemburg and Sweden had all reported getting sick. A Swedish soldier denied that it was Covid-19 that made her and her fellow Swedes ill, saying that they had tested negative for the virus.