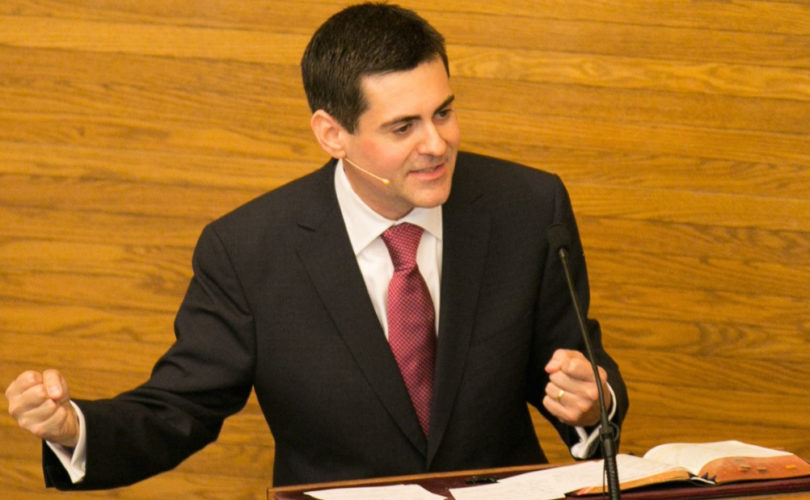 Both the Evangelical and homosexual communities took to social media today to debate a report from Religion News Service claiming that Southern Baptist leader Dr. Russell Moore publicly denounced sexual orientation change therapy at the denomination’s conference on “The Gospel, Homosexuality and the Future of Marriage” this week.

According to RNS, Moore told a group of reporters at a press breakfast that reparative therapies aimed at ridding patients of unwanted same-sex attraction are “severely counterproductive.”

“There were utopian ideas about reparative therapy that frankly weren’t unique to evangelicalism,” Moore said. “That was something that came along in the 1970s and 1980s about the power of psychotherapy to do all sorts of things that we have a more nuanced views about now.”

Instead of depending on psychologists for a cure for same-sex attraction, Moore suggested that people with homosexual inclinations look to Christ and the Gospel for the strength to withstand their particular temptation to sin.

“The Bible doesn’t promise us freedom from temptation,” Moore said. “The Bible promises us the power of the spirit to walk through temptation.”

Some homosexual activists praised Moore’s statements, splashing their websites with headlines celebrating Moore’s “rejection” of reparative therapy, which they see as “torture.”

But others pointed out that although Moore appeared to be distancing his denomination from psychotherapeutic approaches to sexual orientation change efforts, he and other speakers at the conference actively promoted a spiritually-based strategy to achieve the same goal: namely, a rejection of gay behavior.

.@drmoore denounces ex-gay/reparative therapy then talks to a panel of… ex-gays. That level of disconnect is stunning. #ERLC2014

Hey @drmoore, the idea that through Christ people can be changed IS a form of reparative therapy. #ERLC2014 https://t.co/3VBTfkStyM

Writing for Christianity Today, Chelsen Vicari, Evangelical program director for the Institute on Religion and Democracy, said that both sides were taking Moore’s remarks out of context.

“Taken out of context, Moore's remarks to press at the ERLC's 2014 conference this week could very easily be used to totally denounce reparative therapy,” Vicari wrote. “But if you read all of Moore's statements, nowhere do you find him downright rejecting reparative therapy. Instead, he's putting it in its place on the hierarchy of healing.”

“It sounds like Moore is saying that when you find out your child has same-sex attraction, your first step should not be placing them into reparative therapy,” Vicari wrote. “If you do, then you've missed the only step that's actually going to help: yielding to Jesus Christ who calls us to love everyone without conditions. As Moore put it, ‘The response is not shunning, putting them out on the street … The answer is loving your child.’”

“I agree with Moore that therapy is not the immediate solution,” added Vicari. “Our liberation from sin is found in Jesus Christ alone. And I will go further to say that some reparative therapy programs have done more harm than good because they are operated by mere mortals with their own flaws and who are more dependent on a 12-step course than on Christ.”

But Vicari said she was concerned that Moore’s words would be twisted “so that licensed Christian therapists who reach out to the LGBT community will be ridiculed or dismissed.”

“There are Christian therapists who are ministry-minded as they work to help heal the wounds of same-sex attracted individuals dealing with trauma of sexual abuse, confusion or depression because of their attractions,” wrote Vicari. “These therapists are called to a special mission-field all their own and need to be supported.”

Vicari added, “My larger fear is that we will also dismiss self-described ex-gays who are no longer tempted by same-sex attractions. Through the power of an encounter with Jesus Christ, their temptation has been wiped away. Praise God for that. And we might also dismiss persons dealing with same-sex attractions who are staying committed to God and resisting those attractions through the power of the Holy Spirit. Praise God for that, too.”

Vicari quoted a friend who recently told her, “None of us gets to choose what we're tempted by; we only get to choose how we respond to that temptation.”

LifeSiteNews reached out to Moore’s staff for clarification on his comments.  We were directed to watch the following video, which a spokesman said accurately summed up Moore’s feelings on the issue: