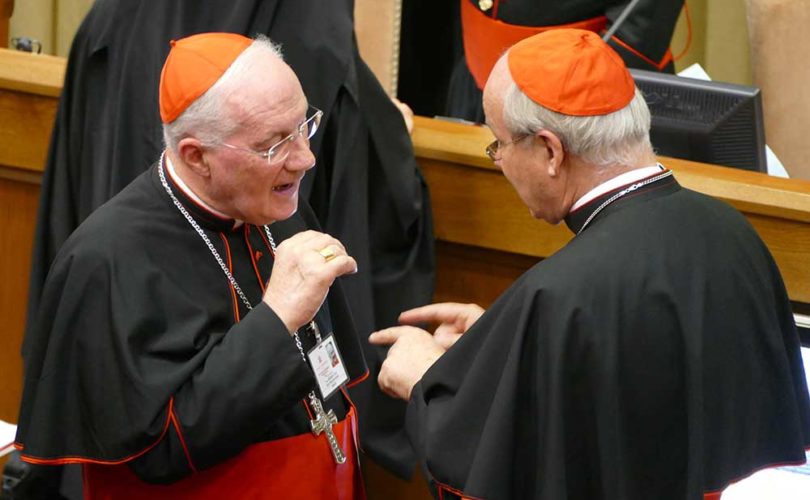 Marc Cardinal Ouellet, prefect of the Vatican's Congregation for Bishops, which oversees the appointment of bishops worldwide, said in a talk last month that the Pope’s 2016 exhortation Amoris Laetitia “may open a door” for civilly-divorced-and-remarried Catholics to receive Holy Communion. He said that some saw in the Pope's teaching “the good news of an openness.”

“And all of this may open a door to receiving the help of the sacraments of penance and Eucharist in certain cases, as we read in the footnote [of Amoris Laetitia], not in such a way as to generalize or trivialize, but in a way that discerns carefully with a logic of pastoral mercy,” he told more than 80 bishops and eparchs attending the September 25 plenary of the Canadian Conference of Catholic Bishops.

The Cardinal was referring to footnote 351 where the Pope writes that those living in an objective situation of sin can receive the “help of the sacraments” to grow in the life of grace and charity.

Ouellet is the former Archbishop of Quebec City and was considered a leading contender for the papacy during the 2013 conclave in which Pope Francis was elected. He had earned respect from life and family advocates for his strong positions in defense of life, marriage, and family.

The position outlined by the Cardinal in his talk appears to contradict the position he held on the matter prior to Amoris Laetitia. In his 2015 book Mystery and Sacrament of Love, he explained that it is impossible for the divorced and remarried to receive Communion.

“Despite pressure from various cultures and theological opinions, the Holy See does not permit eucharistic communion to persons who have contracted a sacramental bond and then abandoned it to form another, non-sacramental bond,” he wrote at that time.

“The document affirms: ‘They [divorced and remarried persons] are unable to be admitted [to eucharistic communion] from the fact that their state and condition of life objectively contradict that union of love between Christ and the Church which is signified and effected by the Eucharist’ (FC 84),” he quoted from the exhortation.

“A further pastoral reason is also given: If such persons ‘were admitted to the Eucharist, the faithful would be led into error and confusion regarding the Church’s teaching about the indissolubility of marriage,’” he added.

The Cardinal said that giving Holy Communion to the divorced and remarried would amount to a “false communion.”

Those who have divorced and remarried are in a situation that objectively contradicts the indissoluble ecclesial bond that they solemnly expressed before the community. They are unable to represent in the world the Church-Brides unconditional “amen” to the gift of the Bridegroom in the Eucharist. Communion on the part of divorced and remarried persons would not be a genuine, personal and ecclesial “amen” to Christ’s Body and Blood, broken and shed for the salvation both of the spouses and of all mankind. While respecting the secret of conscience, the Church cannot allow sacramental communion in such cases because to do so would be — objectively — to allow a false communion that would contradict her fidelity to the Bridegroom’s sacrifice.

In his talk to the Canadian bishops, the Cardinal went on to discredit those who say making exceptions for remarried Catholics to receive Communion “in certain cases” is a departure from previous Catholic teaching.

“We are indeed dealing here with exceptions, which do not mean changes to doctrine, or changes to sacramental discipline, but it is an application of them that is more differentiated and adapted to concrete circumstances and to the good of persons,” he said.

“I must emphasize here that any alarmist interpretation that decries here a break with tradition, or else a permissive interpretation that celebrates an access to the sacraments granted at ‘long last’ for the divorced and remarried, all this is unfaithful to the text and to the intention of the supreme pontiff,” he added.

But moral theologian Dr. Christian Brugger, Dean of Philosophy and Theology at the University of Notre Dame Australia, told LifeSiteNews that Cardinal Ouellet’s position that the Church can allow exceptions to the norm while keeping the authentic teaching intact is problematic.

“There are no exceptions to exceptionless moral norms prohibiting intrinsically evil acts such as extramarital sexual relations,” he said.

When it is a matter of the moral norms prohibiting intrinsic evil, there are no privileges or exceptions for anyone. It makes no difference whether one is the master of the world or the “poorest of the poor” on the face of the earth. Before the demands of morality we are all absolutely equal. (Note: italics original)

Commented Brugger: “The unbroken norm that prohibits sexually active civilly remarried persons from receiving the Eucharist, unless and until they firmly resolve to live in perfect continence, is based upon the definitive teaching that intercourse with someone other than one's wife is always wrong.”

He added that it is “not ‘alarmist’ to conclude that if one true exception is approved, the exceptionless nature of the norm has been compromised.”

Brugger noted how easily it happens that exceptions quickly become the norm, such as when the 1931 Anglican Lambeth Conference departed from the universally held Christian teaching against contraceptive use by permitting some couples in highly qualified situations to contracept.

Cardinal Ouellet’s interpretation of Amoris Laetitia appears to contradict the interpretation of a number of his brother bishops in Canada, who view the exhortation as a continuation of Catholic teaching in refusing Communion to divorced and civilly remarried Catholics (here, here, and here).

‘Profaning the body and blood of the Lord’

The Catholic Church teaches that the faithful may receive Communion if they have the proper disposition, namely that they be in the state of grace (free from mortal sin).

Breaking the sixth commandment that prohibits adultery has always been viewed by the Catholic Church as serious sin. The Church follows the teaching of St. Paul in this matter where he states that the one who “eats the bread or drinks the cup of the Lord in an unworthy manner will be guilty of profaning the body and blood of the Lord.”

Those who receive the body and blood of the Lord unworthily “eats and drinks judgment upon himself,” St. Paul teaches.

It was over this very issue of Communion for the remarried that four Cardinals issued five formal questions (dubia) to Pope Francis, asking him if his teaching conformed to perennial Catholic teaching. They specifically asked him if Amoris Laetitia allows habitual adulterous couples to be granted absolution and to receive Holy Communion. So far, the Pope has refused to answer their questions. In the meantime, two of the Cardinals have died.

Last month, over 60 Catholic clergy and lay scholars issued a “filial correction” to Pope Francis for “propagating heresy.” Listed among the “words, deeds and omissions” of Pope Francis that they say promote heresy are the Pope’s endorsements of interpretations of his Exhortation that allow Communion to be given to adulterers.

The signers explicitly call it a heresy that “Our Lord Jesus Christ wills that the Church abandon her perennial discipline of refusing the Eucharist to the divorced and remarried…who do not express contrition for their state of life and a firm purpose of amendment with regard to it.”

During his talk, Cardinal Ouellet said that clergy need a “pastoral conversion” to understand and implement the teaching of Pope Francis.

“Without this conversion that affirms the person in their gradual progression it is impossible to adopt an appropriate pastoral attitude of welcoming, of listening, of dialogue, and of mercy,” he said.

The Cardinal said that clergy who have experienced this conversion will have “respect for personal decisions even if the choices made are not yet entirely in keeping with the gospel ideal taught by the Church.”

By means of such a conversion, pastors who accompany those living in “irregular situations” will be able to “discern” the “gap that exists between general norms and particular circumstances,” he said. This will allow such pastors to see the “possibility of subjectively living in grace in an objective situation of sin,” he added.

Elsewhere in his talk, the Cardinal lamented what he called a “huge gap” in the Canadian Catholic Church between the “official teaching of the church and the lived experience of couples and families.”

He noted how Canadian “theologians and pastors” received Pope Paul VI’s 1968 Encyclical Humanae Vitae against contraception with a “muted welcome, if not one of passive dissent.” This, he added, did not help with its pastoral implementation. He outlined his hope that Amoris Laetitia would be greeted with wider acceptance on account of the Pope’s emphasis on “accompanying, discerning, and integrating.”

The Cardinal interestingly did not mention that it was the Canadian bishops themselves who openly dissented from Humanae Vitae two months after its release. In their September 27, 1968 controversial “Winnipeg Statement,” the bishops opened a door for couples to use contraception, stating that if a couple has “tried sincerely but without success to pursue a line of conduct in keeping with the given directives, they may be safely assured that, whoever honestly chooses that course which seems right to him does so in good conscience.”

The Cardinal concluded his talk by noting how the teaching in Amoris Laetitia is a “universal approach” that is “not limited to situations deemed ‘irregular.’”