Bishop Peter Christensen's liturgical strictures are allegedly plagiarized a blog from a priest.

BOISE, Idaho, April 9, 2020 (LifeSiteNews) ― The Bishop of Boise has been accused of plagiarizing recent directives on the liturgy in which he prohibited priests in his diocese from saying Mass facing toward the tabernacle (ad orientem) and from using communion rails. 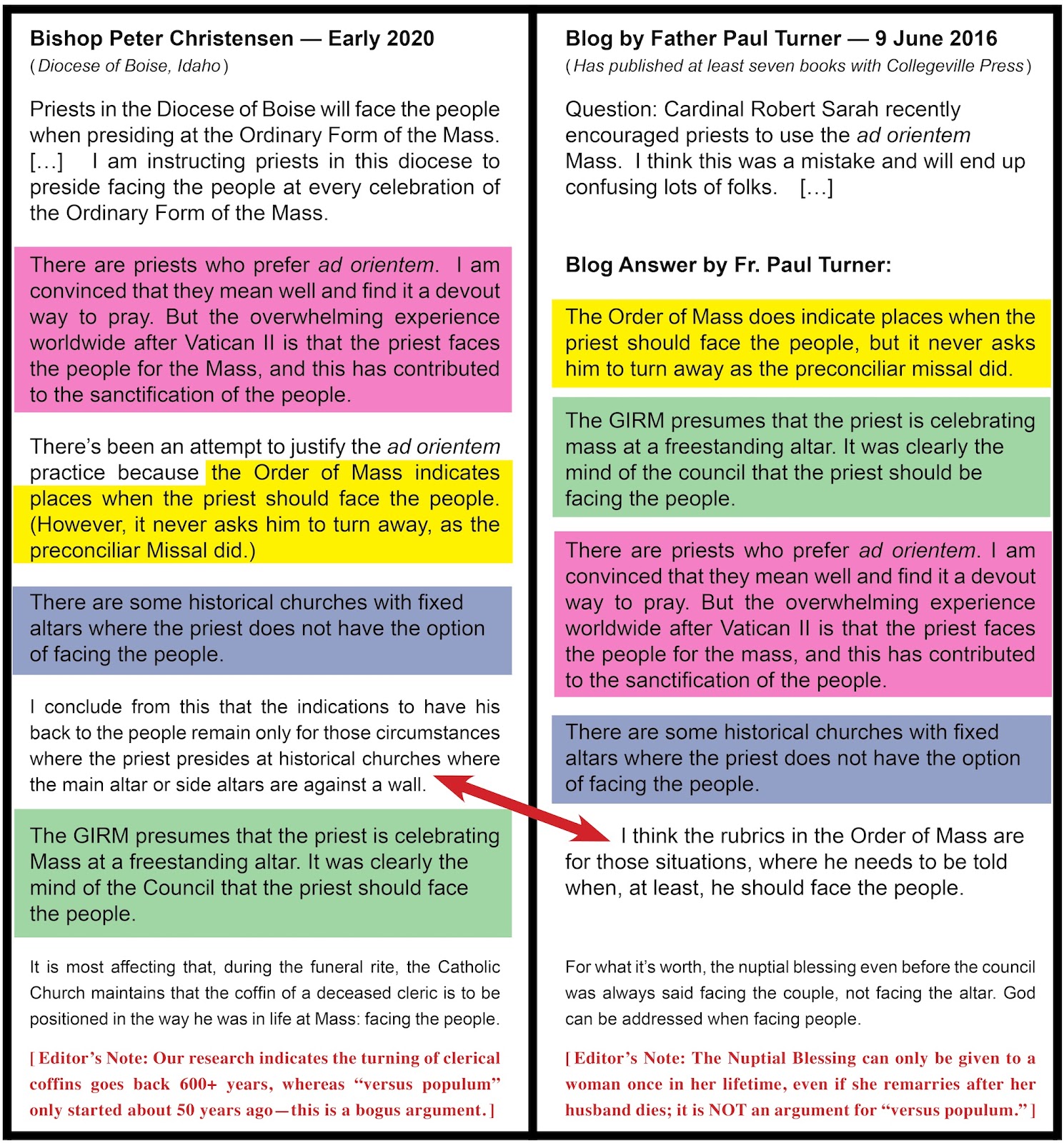 Moreno called Bishop Christensen’s letter, which directed priests to discourage traditional postures in worship and to report on any traditional Latin Masses they say “frightening.” She said it was her fear that led her and her husband to re-read his letter and then to do an internet search. Moreno said finding the bishop’s source took her husband “seven seconds.”

LifeSiteNews has reached out to representatives of the Diocese of Boise and Ms. Moreno for comment but has not yet received a response.

The Catholic musician brought attention to Christensen’s own warning against finding liturgical information on blogs and websites: “Sources such as independent websites and social media platforms that are unaffiliated with the Holy See or the USCCB are not to be considered trustworthy or appropriate for catechesis.”

Fr. Paul Turner told LifeSiteNews by email that he is indeed the author of the June 9, 2016 blog post under discussion and that he did not give Bishop Christensen “explicit permission” to use it.

“(B)ut I put my posts and articles on my website for the common good of the Church and hope that they will be helpful,” he explained.

“I have in the past even given blanket permissions for people to use the material I write.”

Dr. Joseph Shaw of the Latin Mass Society of England and Wales told LifeSiteNews that he is “glad” Bishop Christensen is using the internet as a research tool but also that the bishop has been misled by it.

“I am glad to see Bishop Christensen making full use of the internet to research the subject of Mass celebrated ad orientem, and I hope he will allow those under his authority to continue to do the same,” he wrote via social media.

“He has been hampered, however, by the claim of his source that celebration 'facing the people' was 'clearly the mind of the council,’ which has no basis in fact. The Second Vatican Council never discussed the issue."

Christensen, 67, first issued the memo to the priests of his diocese to enforce his liturgical preferences on February 28. It was subsequently published in the Idaho Catholic Register in late March.

“Priests in the Diocese of Boise will face the people when presiding at the Ordinary Form of the Mass,” he instructed and cited the 1970s General Instruction to the Roman Missal (GIRM), saying Paragraph 299 “makes it plain that the universal Church envisions the priest presiding at Mass facing the people.”

However, author and liturgist Dr. Peter Kwasniewski, among others, disagreed with the bishop. In an opinion piece for LifeSiteNews, Kwasniewski illustrated how Christensen was mistaken in his interpretation of the GIRM and also in his (or Fr. Turner’s) description of the “mind of the Council.”

“As far as I can tell, only these two mentions of versus populum (in the records of the Second Vatican Council),” Kwasniewski wrote

“To get a sense of comparison, the question of whether to abolish the maniple arose more frequently than that.”

According to the Roman Catholic Diocese of Boise, Christensen holds a Master of Divinity and a Master of Applied Spirituality from St. Paul Seminary, St. Paul, Minnesota.