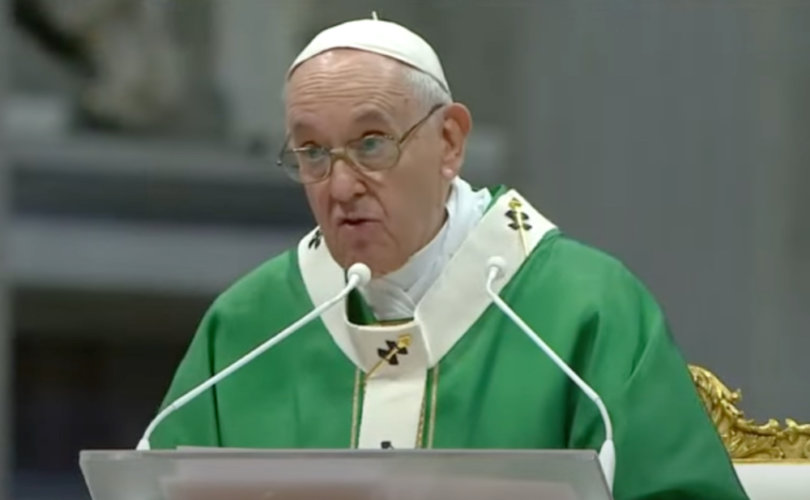 VATICAN CITY (LifeSiteNews) — Pope Francis has opened the multi-year Synod on Synodality by calling for the Catholic Church to “encounter, listen and discern,” and to become “a different Church.”

The weekend of events, starting the multi-year Synod on Synodality, consisted of a “Moment of Reflection” on Saturday and a Solemn Mass on Sunday, at which the Pope preached on the synodal process.

Highlighting the themes of “unity, communion … fraternity,” the pontiff declared that the synod has “three key words: communion, participation and mission,” which would enable the Church to undergo a process of “change” and “healing.”

Managing editor of Catholic Family News Matt Gaspers observed that the synod is “an extension of the Second Vatican Council,” designed to promote a “parallel church” which would act against the Catholic faith.

Moment of reflection: Ecumenical mission of the synod

Pope Francis began his Saturday synodal reflection by noting his desire to have the Synod guided by the scriptural verse “that they may all be one.”

“This is what we are called to: unity, communion, the fraternity born of the realization that all of us are embraced by the one love of God,” he added.

The phrase “that they may all be one,” used so often in ecumenical parlance, is a truncated quotation from Scripture, leaving out the remainder of the phrase which reads “that they also may be one in us; that the world may believe that thou hast sent me.” As such, it cannot refer to any unity outside the fullness of the Church, but is a reference to others becoming members of the Church and consequently of the mystical body of Christ.

Pointing to the Second Vatican Council as a reference for the Synod on Synodaliy, Francis stated that a synod only “proves truly beneficial if it becomes a living expression of ‘being Church,’ of a way of acting marked by true participation.”

Mentioning those who “remain on the fringes,” the Pope added that “[e]nabling everyone to participate is an essential ecclesial duty!”

The vademecum and preparatory document described the Synod’s “act of discerning” as entailing listening to “people who have left the practice of the faith, people of other faith traditions, people of no religious belief, etc.”

To avoid synodal ‘risks,’ Pope called for ‘a different Church’

The 84-year-old Pontiff saw the Synod as a “great opportunity for a pastoral conversion in terms of mission and ecumenism,” while also highlighting certain “risks.” He described three risks as “formalism,” “intellectualism,” and “the temptation of complacency.”

To avoid the “risk” of “formalism,” Francis declared that this would “require changing certain overly vertical, distorted and partial visions of the Church, the priestly ministry, the role of the laity, ecclesial responsibilities, roles of governance and so forth.”

Avoiding the “risk” of “complacency” necessitates the Synod being “a process of becoming,” which would change the very nature of the Church into a “synodal Church,” a “listening Church,” and a “Church of closeness.”

The Pope did not mention the Church’s God-given mission of teaching the faith. Instead he quoted French theologian Fr. Yves Congar, a hugely influential figure at Vatican II, saying: “‘There is no need to create another Church, but to create a different Church.’ That is the challenge. For a ‘different Church,’ a Church open to the newness that God wants to suggest, let us with greater fervour and frequency invoke the Holy Spirit and humbly listen to him, journeying together as he, the source of communion and mission, desires: with docility and courage.”

“Keep us from becoming a ‘museum Church,’ beautiful but mute, with much past and little future,” continued Pope Francis.

He decried the phrase of “We have always done it that way,” saying that such a spirit is “poison for the life of the Church” and is promoted by people who “apply old solutions to new problems.”

The Pontiff’s words were firmly rejected by U.K. author Deacon Nick Donnelly, who wrote: “I will not be part of this different Church. I will remain a member of the one, holy, catholic and apostolic Church instituted by Our Lord Jesus Christ.”

Synod is a ‘process of healing’ which will change the Church

The second formal event opening the Synod took place Sunday, with a Mass in St. Peter’s Basilica and a homily from the Pope, in which he repeated his emphasis on “listening,” “encountering,” and discerning, while avoiding any mention of teaching and doctrinal adherence.

Comparing the Synod’s process of “listening” and “encountering” to Christ’s actions, Pope Francis declared that the three words “Encounter, listen and discern … characterize the Synod.”

“We too are called to become experts in the art of encounter,” said the Pope. While promoting practices such as “adoration,” he took aim at what he styled as taking “refuge in formality or presenting the proper image — the clerical and courtly spirit, where I am more Monsieur l’abbé than Father,” adding that “the experience of encounter changes us.”

Stating that the Holy Spirit asks the Church to “listen to the world, to the challenges and changes that it sets before us,” the Pope asked that Catholics “not soundproof our hearts; let us not remain barricaded in our certainties. So often our certainties can make us closed. Let us listen to one another.”

This sentiment was met with disapproval from popular U.K. blogger, Fr. Raymond Blake, who commented, “I can’t help feeling that after Covid most congregations worldwide are down by about 40/50% most pastors have more important things to be concerned about.”

Describing the Synod on Synodality as a process of “spiritual” and “ecclesial discernment,” the Pope said, “On the contrary, whenever we enter into dialogue, we allow ourselves to be challenged, to advance on a journey. And in the end, we are no longer the same; we are changed.”

By allowing the Church to undergo a process of change, the Synod would thus become “a process of healing guided by the Spirit,” the Pope declared.

LifeSiteNews spoke to Matt Gaspers, managing editor of Catholic Family News, to ask him about the opening of the Synod, which he suggested was promoting a “parallel church.”

“Between the Pope’s own comments on the subject and the official documents issued by the Vatican, the ‘Synod on Synodality’ (Oct. 2021 – Oct. 2023) is clearly intended to be an extension of the Second Vatican Council (1962–1965) — one might even dub it ‘Vatican III’,” noted Gaspers.

Fifty-nine years ago today (Oct. 11, 1962), Pope John XXIII opened the Second Vatican Council (1962-1965). Yesterday, @Pontifex opened a two-year “synodal process” (his words) which in many ways appears to be a continuation of Vatican II. pic.twitter.com/LnqVGmHeTb

“The Preparatory Document (PD), for example, directly connects the synodal ‘journey,’ now beginning, with ‘the Church’s ‘renewal’ proposed by the Second Vatican Council’ (PD, 1). The same document lists ‘ten thematic nuclei’ (also found in the accompanying Vademecum or Handbook) which essentially reiterate several novel themes addressed at the Council, including ecumenism, interreligious dialogue, the importance of the laity, and so forth (cf. PD, 30; Handbook, 5.3).”

Pointing to the Pope’s quote from Fr. Congar, Gaspers stated that it highlighted the link between the Synod and the ecclesial revolution of Vatican II: “Further confirmation of the Synod’s connection to the Council was provided by Pope Francis in his October 9 address to Synod participants (the day before the official opening). He quoted Fr. Yves Congar (1904-1995), a progressive Dominican peritus (theological expert) at Vatican II, who “once said: ‘There is no need to create another Church, but to create a different Church’ (True and False Reform in the Church).”

Gaspers continued: “This calls to mind what Archbishop Carlo Maria Viganò wrote in his first major intervention regarding the Council (June 9, 2020), namely, “that from Vatican II onwards a parallel church was built, superimposed over and diametrically opposed to the true Church of Christ. This parallel church progressively obscured the divine institution founded by Our Lord in order to replace it with a spurious entity, corresponding to the desired universal religion that was first theorized by Masonry.”

The Synod now moves first to the diocesan stage, where discussions will be held based on the vademecum and the preparatory document, although bishops are urged to adapt the documents to suit local situations and “to listen.” The results of this stage will form the working document or instrumentum laboris, which will be discussed at continental meetings of bishops’ conferences across the globe.

The overall process will conclude with the October 2023 synod of bishops in Rome when the bishops will assess a second version of the instrumentum laboris. While two years has been set aside for the synod, the mass of material demanded by the preparatory documents could make even a two-year limit an ambitious one for the scope of the proposed process.

The former prefect of the Congregation for the Doctrine of the Faith, Cardinal Gerhard Müller, has previously attacked the modern notion of synodality, saying that “its original defect, which consists of the political misunderstanding that the Church revolved around power that now has to be limited and shared ‘democratically,’ must not be exaggerated.”

“In reality, the spiritual authority of the bishops and the mission of the laity is at the service of revealed truth and the eternal salvation of all those for whom Jesus Christ sacrificed His life on the cross,” he added.