LEXINGTON, Kentucky, September 3, 2020 (LifeSiteNews) – A Catholic diocese has asked parishes to place an ad for an LGBT Ministry in their weekly bulletins:

The request, made by the Office for Peace and Justice in the Diocese of Lexington, Kentucky, was applauded by pro-LGBT Jesuit priest James Martin on Twitter.

Diocese of Lexington Bishop John Stowe, OFM Conv., has a long history of pro-LGBT activism within the Catholic Church. In June, he released a “Pride Month” video in which he aplogized for the Church’s teaching on homosexuality and gender confusion.

During 2019’s Pride Month, Stowe issued a “prayer” card that celebrates homosexual “pride” and includes an image of a crucifix with rainbow colors coming from it. 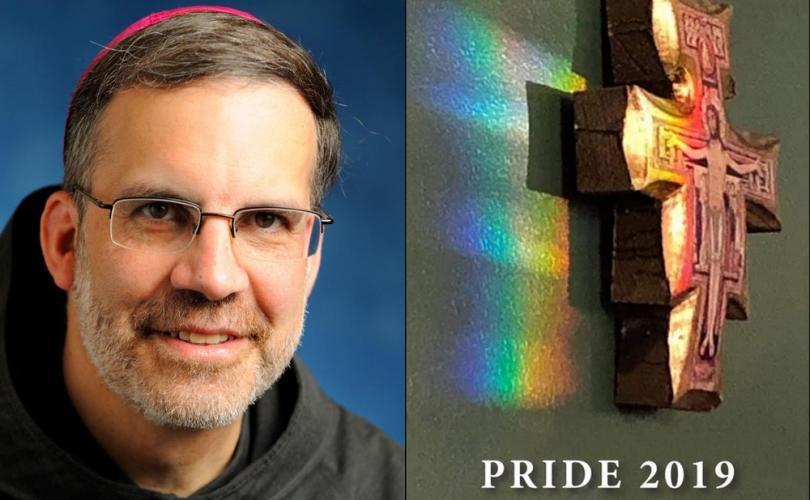 In 2018, Bishop Stowe allowed Fortunate Families, a pro-LGBT “Catholic” organization working in partnership with “Lexington Catholic LGBT Ministry” and the University of Kentucky LGBTQ* Resource Center, to host dissident Fr. Bryan Massingale. He spoke about “LGBT Persons in the The Age of Pope Francis & Social Ethics.”

Stowe is one of five bishops who endorsed Fr. Martin’s book, “Building a Bridge,” and was also a featured speaker at a 2017 conference for the dissident group New Ways Ministry. The gathering was titled “Justice and Mercy Shall Kiss: LGBT Catholics in the Age of Pope Francis.”

Fr. Martin, the leading advocate for the normilization of homosexuality and transgenderism within the Catholic Church, is an honorary member of the Fortunate Families Board of Directors. The Fortunate Families website states that Martin’s “prophetic ministry is a gift to our ministry and to the church.”

Zerkowski was “instrumental in beginning two LGBTQ+ support groups at Lexington Catholic High School and Catholic LGBTQ+ ministries throughout the United States and Canada.” He also publishes a monthly faith-based article that appears in LinQ, the Pride Community Services Organization of the Bluegrass LGBT magazine.

According to its own website, Fortunate Families’ application for a booth at the 2015 World Meeting of Families in Philadelphia was “denied because the committee overseeing the booth ... made the determination that Fortunate Families teaches that ‘if parents don't accept everything about their homosexual child's lifestyle the child will commit suicide.’”

Fr. Martin’s tweet was a follow-up to an early posting praising a Mexican archbishop

“Good news from Mexico: Archbishop of Monterrey, Rogelio Cabrera López, in dialogue with LGBTQ Catholics, says he ‘always wanted priests to serve the LGBTIQ+ community with charity and respect.’ He spoke with Mexico Network of Rainbow Catholics (REDCAM).”

Good news from Mexico: Archbishop of Monterrey, Rogelio Cabrera López, in dialogue with LGBTQ Catholics, says he "always wanted priests to serve the LGBTIQ+ community with charity and respect." He spoke with Mexico Network of Rainbow Catholics (REDCAM) https://t.co/cX72bF4cvU pic.twitter.com/4PYuhbQGn5

During the interview, López spoke of designating a chapel to conduct baptisms for the children of homosexual couples and that he had appointed three priests from the Archdiocese of Monterrey to “serve diverse groups,” including LGBTIQ+ Catholics “as God intended.”