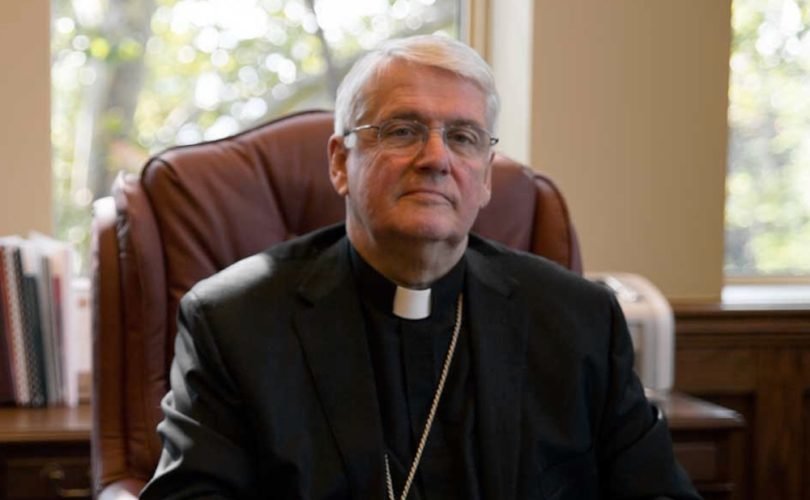 HAMILTON, Ontario, April 19, 2021 (LifeSiteNews) – The Diocese of Hamilton headed by Bishop Douglas Crosby has not only backed a move from the local Catholic school board to have the gay pride flags flown at Catholic schools within the board but has forbidden local parish priests from opposing the matter from the pulpit.

The Halton Catholic District School Board (HCDSB) within the Diocese of Hamilton will vote April 20 on a motion to fly the rainbow-colored homosexual pride flag at all board-run schools during the month of June, LifeSiteNews reported last week.

In preparation for the Tuesday evening meeting, Father Cornelius O’Mahony, Episcopal Vicar for Education for the Catholic Partners of the Diocese of Hamilton, submitted a document prepared at his request by Tamara Nugent and Yvonne Runstedler that argues in favor of pride flags.

The document, titled “To Listen, To Reason and To Propose: The Rainbow Flag & Catholic Schools,” defends the pride flag as representing “diverse people who come together to form something beautiful (the rainbow).”

Despite the term “pride” in salvation history denoting an explicit refusal to follow God and his rule, the document then goes on to provide a rationale for flying the pride flag at Catholic schools.

“Research has demonstrated that an inclusive school culture and climate is important for all students to achieve success and personal wellbeing. Evidence has shown that this is especially important for students who are, or who identify as members of the LGBTQ+ community,” the document states.

— Article continues below Petition —
PETITION: Reject government control of the internet in Canada
Show Petition Text
6557 have signed the petition.
Let's get to 7500!
Thank you for signing this petition!
Add your signature:
Show Petition Text

The document quotes Ontario legislation on matters pertaining to “Equity and Inclusive Education” but fails to quote what the Catholic Church teaches about the spiritual dangers associated with the sexual behaviors and lifestyles that the flag represents.

The writers quote from a 2020 memo from the Institute for Catholic Education (ICE) to give the impression that Ontario’s bishops are fully on board with allowing Catholic school boards to promote messages and symbols that “communicate their (the boards’) commitment to ensuring equitable, safe, and inclusive school communities.” The ICE, however, never proposed in its memo that the pride flag be used to communicate such a message and made it clear in the memo that while the bishops reviewed and discussed proposals for messages and images in support of “equitable, safe, and inclusive school communities” such messages and images were “not ‘approved’ by the bishops.”

The document makes a case for raising the pride flag by referring to the prior acceptance of “Gay Straight Alliance student support groups” in Catholic schools. “The establishment of GSAs is empirically supported to contribute to more positive school environments that are safer, more inclusive learning spaces to thrive,” the document states.

The document concludes with a strong call to fly the flag that the writers admitted is “strongly connected to the LGBTQ+ community” while at the same time being a “representation of social change.”

“Flying the Rainbow Flag or Progress Flag communicates that our schools are safe spaces for everyone,” it stated.

Pro-family leaders in Ontario have warned that flying the pride flag at Catholic schools amounts to a “betrayal” of everything it means to be a Catholic school.

“The gay rainbow flag is a political symbol which celebrates sexual sin and rejects the law of God,” Jack Fonseca of Canada’s pro-life and pro-family organization Campaign Life Coalition told LifeSiteNews in a recent interview. “It is understood by gay activists and broader society to mean that sodomy is morally acceptable, that homosexual ‘marriage’ is a right, and that Christians who uphold Biblical teaching on homosexuality should be shouted down and purged from society.”

“This flag is also a sign of conquest over the Catholic Church, in the same way that an invader plants his flag on conquered territory to assert his domination over the land and the subjugation of the inhabitants to his will,” he added.

While the Hamilton Diocese was defending the motion to fly pride flags at Catholic schools, it was, at the same time, forbidding parish priests within the diocese from speaking out about the matter.

An April 16 memorandum to all priests in Halton Deanery from Monsignor Murray Kroetsch, Chancellor for the Diocese of Hamilton, warns priests that they may not make available petitions for or against the motion and that they may not comment on the matter in homilies or announcements.

“As you are aware, there is a motion before the Halton Catholic District School Board regarding the flying of the Pride Flag during the month of June, to be voted on at the Board Meeting on April 20, 2021. Please note that this is a matter before the publicly funded Catholic School board,” the memorandum states.

“Requests have been circulated soliciting parishioners to sign petitions according to their views on the motion. Please note that it is not permitted to promote or make available any petitions, either in favour of the motion or against it in Parishes in the Diocese,” it adds.

“Furthermore, the motion before the School Board is not to be commented upon in the Homily or Announcements at Sunday Masses,” it concludes.

LifeSiteNews reached out to Bishop Crosby and Monsignor Kroetsch by phone for comment on the document submitted to the board and the memorandum sent to diocesan priests. The Diocese’s Administrative Assistant, Carol Daly, told LifeSite that she was “not at liberty” to speak on the matter. When LifeSite pressed if Bishop Crosby could give a comment, Daly responded that he was “in a meeting.” She did not respond to LifeSite’s request to pass on a message to the bishop.

The Diocese’s memorandum did not stop at least one priest within the diocese from communicating to the Halton Catholic Board his strong opposition to the motion on the grounds that flying the pride flag “goes against the teaching of the Catholic Church.”

“The mission of the Church is to evangelize the world by turning all humankind from sinful ways and leading them to the way of life proposed by God himself in the person of the only Saviour of the world, our Lord Jesus Christ. St. Paul understood it well when he wrote to the Christian community in Rome, the capital of the pagan world: ‘Do not be conformed to this world, but be transformed by the renewing of your mind, so that you may prove what the will of God is, that which is good and acceptable and perfect.’ (Rm 12:2),” the priest wrote.

“Thus we are not supposed to conform the Gospel to the worldly way of thinking but to transform the world by conforming our ways to God’s ways. In light of that we cannot in good conscience fly the Pride flag, which represents a sinful way of life,” he added.

The priest wrote in his letter that if the board votes to fly the flag, it will “become a scandal to the world and deserve Jesus’s condemnation.”

“By flying the Pride flag in our schools we would betray our Lord, deform His teachings and fail in calling the world to conversion,” he said.

The priest said that instead of flying the pride flag, the school board should “promote across our Catholic schools and school boards the image of the Sacred Heart of Jesus.”

“God loves every human being, Jesus’s Heart is all-inclusive, nobody is excluded from His love. At the same time his Heart is wounded by our sins. He suffers because of our sinful way of life and calls us to conversion. When we respond to his call, repent and change our ways, then we are able to do God’s will.”

Email the Halton Catholic board as a group by copying and pasting addresses below: