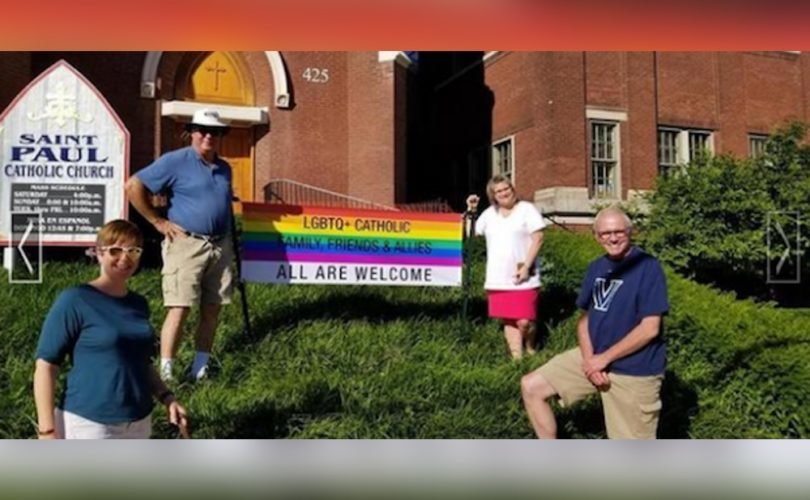 The pro-LGBT rainbow banner outside St. Paul Catholic Church in Lexington, Kentucky, as advertised on the parish's website.

LEXINGTON, Kentucky, July 3, 2018 (LifeSiteNews) – A Catholic church in the heart of Appalachia has attracted media attention for the Gay Pride Month banner stretched across its front lawn. The local ordinary, Bishop John Stowe, has a record of collaborating with a group that rejects Catholic moral teaching, and his spokesperson says individual parishes may decide if they want to promote the homosexual cause.

The rainbow banner in front of St. Paul’s parish in Lexington, Kentucky proclaims:

“Making this kind of statement is a decision a spokesperson for the Diocese of Lexington says is up to each parish,” according to a local TV news report.

The parish’s pastor, Father Chris Clay, sent an email to parishioners saying the banner showcasing the symbol of the homosexual cause is a “small way of counter-acting any experiences of hostility, rejection, and silent treatment that LGBTQ Catholics may have experienced from members of the church that have been deeply hurtful and painful.”

“This banner, as any banner or any welcome we extend, is always done understanding that we adhere and affirm all that the Church teaches regarding faith and morals,” he alleged.

St. Paul’s website prominently features the photo of its rainbow banner on its homepage.

“This is a church that is open to all people and I hope this sign gets that across,” said parishioner Stan “JR” Zerkowski in the TV report. “I don’t think a Catholic Church has ever had a sign like this before in front of it during Pride Week or any other time. However, in other parts of the country we see this regularly.”

“Our LGBTQ sisters and brothers should not be afraid to come in here, will not feel judged, will not feel as though they’re trampling on territory that isn’t theirs,” added Zerkowski.

As it turns out, this St. Paul’s parishioner’s jarring statement is actually unsurprising. There is a whole lot more to TV report than what first meets the eye.

Stan “JR” Zerkowski is no ordinary parishioner. He is the executive director of Fortunate Families, a pro-LGBT Catholic organization. According to his online bio, Zerkowski co-founded and co-leads “Together on the Bridge,” an pro-homosexual ministry, and he founded and leads “Together on the Journey,” an LGBT Family, Friends, and Allies Ministry. He also publishes a monthly faith-based article appears in LinQ, the Pride Community Services Organization of the Bluegrass LGBT magazine.

According to its own website, Fortunate Families’ application for a booth at the 2015 World Meeting of Families in Philadelphia was “denied because the committee overseeing the booth … made the determination that Fortunate Families teaches that ‘if parents don't accept everything about their homosexual child's lifestyle the child will commit suicide.’”

In April, Fortunate Families, in partnership with Lexington Catholic LGBT Ministry and the University of Kentucky LGBTQ* Resource Center, hosted dissident Fr. Bryan Massingale who spoke about “LGBT Persons in the The Age of Pope Francis & Social Ethics.”

Fr. Massingale is a professor of theology at Fordham University who openly takes part in LGBT advocacy. In 2017 Massingale spoke at 8th National Symposium of New Ways Ministry, a “gay-positive ministry of advocacy and justice for lesbian and gay Catholics,” according to the group’s website.

Photos and graphics posted on the Fortunate Families website and Facebook page tell the real story about this group’s actual beliefs.

Stowe is one of five bishops who endorsed Fr. James Martin, SJ’s book, “Building a Bridge,” and was also a featured speaker at last year at a conference for New Ways Ministry. The gathering was titled “Justice and Mercy Shall Kiss: LGBT Catholics in the Age of Pope Francis.”