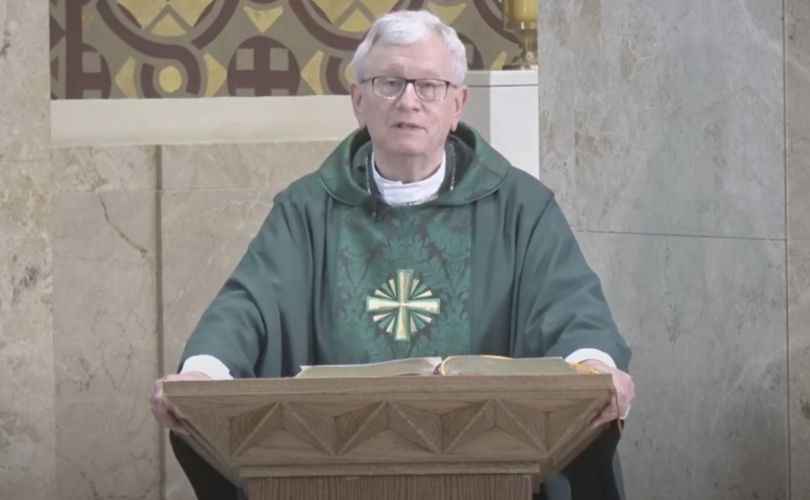 GREEN BAY, Wisconsin (LifeSiteNews) – The Diocese of Green Bay, Wisconsin, has updated its education manual, prohibiting students and staff in diocesan schools from adopting gender pronouns, using bathrooms, and wearing the uniform of the opposite sex.

The updated “General Policy Concerning Gender Identity,” which took effect on July 1, instructs members of “all parishes, schools, and school systems, or other entities” within the Diocese of Green Bay to “respect the biological sex with which a person is born,” requiring diocesan schools to apply the new policy on “gender identity and procedures relating to that person according to that person’s biological sex at birth.”

According to the guidelines, the policy is being enacted “to maintain Church teaching,” which it explains “teaches that our identities as male and female are part of God’s good design in Creation, that our bodies and sexual identities are gifts from God, and that we should accept and care for our bodies as they were created.”

Continuing, the rules stipulate that students’ official documentation must always reflect the biological sex of each individual and that all people “will be addressed and referred to with pronouns in accord with their biological sex,” regardless of requests to be addressed as the opposite sex.

The policy will apply to all 54 schools within the diocesan system, covering some 9,000 students and a further 12,000 people who attend diocese-run religious education classes.

While in schools, students are expected to “conduct themselves in accord with their biological sex at all times,” according to the updated policy. As part of the rules, students will not be permitted to participate in sports teams of the opposing sex, nor will they be permitted to utilize the bathrooms and locker rooms assigned to the opposite sex.

Additionally, the manual outlines that “Catholic schools will not allow, or otherwise cooperate in, the administration of puberty-blocking or cross-sex hormones on school property.

“A student of any Catholic school who insists, or whose parents insist, on open hostility toward, or defiance of, Church teaching, or who otherwise intentionally violate this policy, may be expelled from the school,” the guidelines warn.

Diocesan Vicar General Father John W. Girotti acknowleged that a parent “may decide that the school is not the right fit for their child or the direction for their family,” but affirmed that “[we] in turn, as Catholic schools, have a right to say if parents are not willing to accept what we believe, that maybe the school is not a good fit for them.”

In a press release following publication of the new guidelines, Diocese of Green Bay superintendent of Catholic Schools Todd Blahnik noted that “there may be instances where young people experience conflict between their biological sex and the roles and norms advocated by society said in a press release.”

Continuing, he said that “some young people might feel drawn to dress, act, and even manipulate their physical bodies in ways contrary to God’s plan,” but that the diocese firmly advocates “that young people, working with their parents, bring these issues to their pastor or other trained Christian professionals who might best assist them in clarifying and defining God’s plan.”

The policy emphasizes that, while Catholic teaching must always be upheld by staff and students alike, “a student diagnosed with gender dysphoria should not be denied admission to a Catholic school as long as the student and his or her parents agree that the child will abide with this policy.”

“The Diocese also supports and encourages counseling for those who suffer from or are diagnosed with gender dysphoria by licensed counselors or other medical professionals who hold a correct Christian anthropology of the human person and who understand and adhere to Catholic teaching,” the rules read.

Alongside offering psychological counseling, the diocese’s policy noted that “appropriate medical care may be necessary in rare cases of true genetic or physical anomalies, such as hermaphroditism or intersex” while resolutely rejecting so-called “transgender therapies and/or surgeries that assist a person in ‘transitioning’ his or her gender.”

“Respectful, critical questioning of Catholic teaching in the classroom is encouraged as long as its intent is to help the student progress toward greater awareness and understanding,” the policy states.