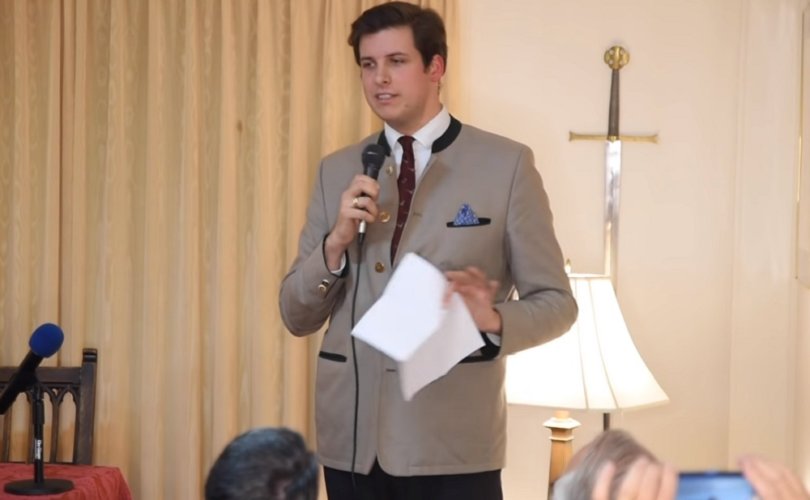 HERZOGENRATH, Germany, February 10, 2020 (LifeSiteNews) — The German diocese of Aachen has pressured a parish not to host a talk by Alexander Tschugguel, who in October 2019 threw the Pachamama statues displayed in a church into the Tiber River.

According to a press release put out by parish priest Father Guido Rodheudt, the diocese feared that the talk, including a discussion immediately following, could “unsettle the faithful, defame the pope, and contribute to a division within the Church.”

With that in mind, the parish decided not to go forward with the event. Instead, it was moved to a secular location in Herzogenrath, not far from the parish hall, where it was scheduled to take place initially.

Following the event, Alexander Tschugguel told LifeSiteNews that the concerns of the diocese are unfounded. “I have done my best to spread the faith clearly according to the Catechism,” he said. As one of the principal motivations for his actions, Tschugguel named the duty of all Catholics to always pray for the Holy Father and his salvation.

Stefan Wieland, press secretary of the bishop of Aachen, told LifeSiteNews that the diocese welcomes, in principle, “the lively exchange and discussion on topics of faith.” According to Wieland, the decision to cancel the event was taken by the parish and its parish priest, who were the organizers. There had been no “demand” for this “on the part of the Diocese of Aachen,” said the press secretary.

He continued, “With great concern that the faithful might be unsettled, the deputy vicar general Rolf-Peter Cremer had previously asked Father Rodheudt in a letter on behalf of Bishop Helmut Dieser that the event should not lead to a defamation of the pope.”

Rodheudt confirmed in a statement to LifeSiteNews that the diocese did not demand to cancel the event, but gave “only food for thought.” This led to the cancelation two days before the scheduled date — Monday, February 10, 2020 — as a step “to relieve the concerns of my bishop.”

At the same time, Rodheudt gave more details of his dealings with his diocese on the question of having Alexander Tschugguel speak in the parish hall.

The parish priest told LifeSiteNews, “I received a written request from the general vicariate of Aachen with the request to describe the content and the progression. I did so, pointing out that the event was to be a lively discussion which should have brought together the positions of those in favor and those against, which were already voiced in public.”

Rodheudt clarified that he did not plan to evaluate or judge what Tschugguel had done in Rome — namely, the throwing into the Tiber of Pachamama statues he had taken out of a church.

He continued, “I received a reply from the head of the department in question that I should not have invited Tschugguel because of his theft of the Pachamama statues.”

Rodheudt quoted from a letter written by this diocesan official, dated February 6: “This action contributes to the division of people and thus also of the Catholic Church. That, too, is reprehensible, in my view. That’s why you as the responsible priest should actually not allow this event.”

Only then did Rodheudt receive the letter from deputy vicar general Cremer, “expressing the bishop’s concern that my event could unsettle the faithful and defame the pope. It was also pointed out that the event was not to be used ‘subsequently to justify spiritually the infringing actions of the person invited.’”

The event in Herzogenrath, which had first been advertised last December, was criticized not only by the diocese, but also by Misereor, a relief organization supervised by the German bishops. Based in Aachen, Misereor has supported projects to help the poor in various continents, including Asia, Africa, and Latin America, since 1958.

According to the organization’s website, “[t]he mandate given to Misereor by the German bishops rules out the promotion of pastoral or missionary measures.” Instead, projects to combat climate change are prominently featured, among other things.

In 2018, Misereor collected more than €232 million, with more than €165 million being provided by the German government. Donations by the faithful amounted to €57 million.

Commenting in general on the role of relief organizations supervised by the German bishops, Tschugguel said, “ In the context of the Amazon Synod, many of these so-called relief organizations, which are highly controversial, have advocated a new syncretistic unified religion and have spoken out against baptizing and evangelizing the natives.”

Referring to the Amazon Synod last year, Misereor recounted in a statement made February 3, “Resistance against new paths accompanied the synod already during its preparation. In Rome, opponents then accused the synod and the pope of worshiping idols and preaching paganism. One of them stole four wooden figures made by a wood carver in the Amazon region, each of them depicting a pregnant woman and used in worship services inside and outside the synod. He stole them from a church and then sank them into the Tiber.” [Editor’s note: It is generally understood that the statues, being made of wood, floated.]

According to Misereor, the Pachamama statues express “that the peoples of the Amazon region protect life, that they experience God in their lives.”

Throwing those statues into the Tiber, Misereor argued, “was not an act of self-defense, but an expression of cultural and religious intolerance and forgetfulness of God under the pretext of acting in the name of God and the Catholic Church.”

Misereor expressed its expectations that “the future on our planet will depend on whether we succeed in clearing the way for us to be able to cooperate with each other in cultural and religious diversity as equals in faith.”

Similarly, Stefan Wieland of the diocese of Aachen pointed LifeSiteNews to Pope Francis, who “took a clear position in the context of the Amazon Synod: to value the faith of the people living there and support their commitment to social and ecological justice.”

The organization preparing theology students in Aachen to become teachers at primary and secondary schools referred to the statement by Misereor, commenting, with a comparison to the Third Reich, “While on January 27, 2020, we remembered the atrocities of the Nazi regime against the Jewish people, we must now admonish: Whoever drowns religious symbols may soon be willing to drown people.”

Tschugguel considered being compared to the evils of the Nazis “very far-fetched.” He pointed out that in the past, he had on multiple occasions talked about the fact that “I’m not a nationalist, I’m not a socialist, and I’m certainly not a National Socialist.”

Father Rodheudt, in his press release, spoke of an “interesting gain of knowledge” following the pressure from the diocese and the statement by Misereor. Asked by LifeSiteNews to clarify what he means by that, the priest responded, “The debate about the legitimacy of the discussion shows that there are obviously taboos which are seemingly problematic to talk about.”

Rodheudt expressed his astonishment, given that earlier this month “at the Synodal Path in Frankfurt resolutions that contradict the teaching of the Church were admitted, too.” This indicated, according to Rodheudt, that “the classical taboo of conformity with the teaching of the Church may be broken. So we find ourselves in an area of new taboos. This will have to be considered. So, too, will the questions of the understanding of mission, the knowledge of truth, and its development.”

In his conversation with LifeSiteNews, Tschugguel asked, “How openly can we discuss things within the Church? Which issues are not allowed to be touched?”

On Facebook, Alexander Tschugguel commented on the cancelation of his event and its move to a different location: “We won’t let that get us down!”