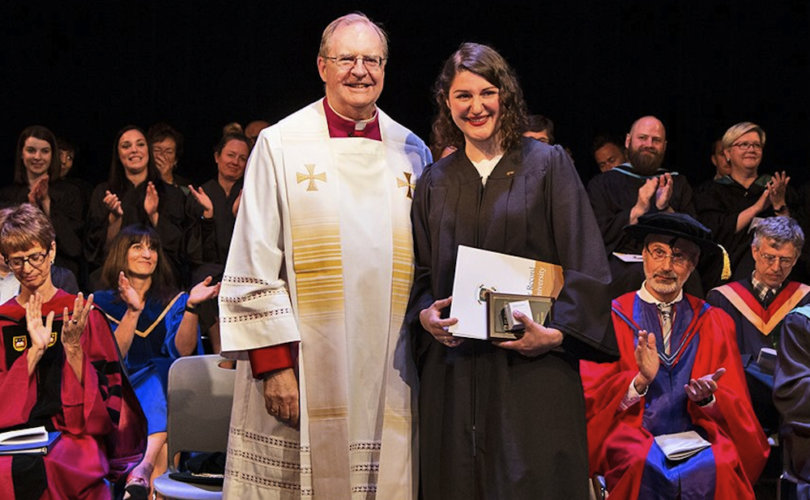 HAMILTON, Ontario, August 7, 2018 (LifeSiteNews) — An Ontario Catholic diocese won’t say why it gave an award for exemplary Catholic leadership to a Catholic university graduate with a Twitter account that abounds with pro-LGBTQIA+ sentiments.

“A decision by the diocese has been made not to participate in the story, not to issue any comment on this,” Hamilton diocesan communication director Pam Aleman told LifeSiteNews.

The Diocese of Hamilton student awards recognize academic excellence and conduct that “exemplifies Catholic leadership qualities, Christian values, and a commitment to service in the community.”

This year’s choice for St. Jerome’s University (SJU), the Catholic college at the University of Waterloo, is Lydia Notten, a graduate of its sexuality, marriage and family studies program.

Notten, who received the award from chancellor Msgr. Murray Kroetsch, is described on the diocesan website as having “fostered a community and culture of equality and human dignity for all.”

But her public Twitter account, as documented below, is devoid of any reference to Catholicism while uncritically promoting the LGBTQIA+ life.

(Perhaps that’s no surprise given that SJU’s sexuality, marriage and family studies department invited transgender activist Sason Bear Bergman to speak at its 2015 symposium. A biological woman who identifies as a trans “man,” and married to J Wallace Skelton, equity adviser for the Toronto District School Board, Bergman infamously wrote in the Huffington Post her goal was “indoctrinate your children into my LGBTQ agenda (And I’m not a bit sorry).”)

Aleman told LifeSiteNews the diocesan student awards, also given to graduates of each Catholic high school, are awarded “on behalf of the diocese, but schools — high schools, universities — they choose who they give this award to.”

St. Jerome’s University (SJU) refused to comment on how it selects its choice for the diocesan award.

“We do not discuss these matters and will not be making comments on our students or graduates,” communications officer Allannah Cormier told LifeSiteNews in an email.

Notten is the daughter of Loretta Notten, director of education for Waterloo Catholic District School Board (WCDSB).

Notten’s mother tweeted her “solidarity with LGBQT” with an image of a rainbow-coloured heart to show empathy for those affected by the tragedy after the June 2016 Orlando gay-night club massacre.

More significantly, Notten sent an email urging students and staff to wear purple shirts and fly school flags at half-mast to “stand up to homophobia and all hate crimes” and be in “solidarity with all LGBTQ persons.”

American writer Joseph Sciambra, who left the homosexual life and returned his Catholic faith 18 years ago, faulted WCDSB for its politically loaded response to the horrific shooting.

“I think it is wonderful and noble for any Catholic to pray for those who died so needlessly in the Orlando massacre, but a Catholic can do this without adopting the vocabulary or the symbols of the modern ‘gay rights’ movement,” he told LifeSiteNews at that time.

Director Notten’s tweet showed she’s either “naive or she has an agenda,” added Sciambra.

“As a Catholic educator, she should have known better,” he said, pointing out that terms such as “gay,” “lesbian,” or “LGBTQ” reduce persons created in the image and likeness of God to no more the sum of their drives and attractions.

Lawler held the post for 15 years before being hired in September 2014 by the Assembly of Catholic Bishops of Ontario.

Under Lawler’s watch, the WCDSB approved a number of controversial materials for school use and adopted policies that critics said “created an air of tolerance towards active homosexuality,” and which LifeSiteNews documented in detail in 2015.

A partisan Liberal, Lawler tweeted support for former Kathleen Wynne’s controversial sex-ed in 2015, and in 2017 tweeted outrage with American President Trump for rescinding the Mexico City policy and thereby “cut(ting) off family planning for millions of poor women globally” and “reinstat(ing])Reagan-era abortion restrictions.”

ACBO president, London Archbishop Roger Fabbro, did not respond when LifeSiteNews brought these tweets to his attention. Lawler has since made his Twitter account private.

Problematic tweets from diocesan award winner As for Diocese of Hamilton award winner Lydia Notten, she was tweeting support of the LGBTQIA+ agenda as early as 2015:

“I am so here for the #Fab5 tearing down toxic masculinity one day at a time,” she tweeted June 20, two days after this:

YES! This is the representation we need. Thank you, @QueerEye ����

“For us to have a culturally relevant conversation about the trans experience is something that two years ago I don't think you would have seen on television” – @KaramoBrown https://t.co/viMwLiTN02“

Notable retweets by Notten include this observation in March 2018 by self-identified queer poet “the one with the ☭ tatto”:

the future isnt female. the future is nonbinary it's genderfluid it's queer and it's trans it's natives rising up against their colonizers it's sex workers getting coin it's gay it's bi it's pan it's ace it's ppl of color it's ppl w disabilities THE FUTURE IS INTERSECTIONAL

Notten informed followers in June that the “A” in LGBTQIA+ is for “Asexuality” after Melissa Fabello, self-described “body acceptance activist, sexuality scholar, and patriarchy smasher” blasted those who mistakenly assumed it stood for “Allies”:

The A is for Asexuality pass it on https://t.co/ZLFw7k3Lmw

She urged followers on June 22 to sign a Lead Now petition objecting to newly elected Premier Doug Ford’s plan to repeal the sex-ed:

Notten opined the NDP was the best option:

It's also worth noting that the polls show there is very little chance of the Liberals coming back into power. If we want to prevent Ford Nation (and the Trump-like ideals Ford represents) from coming to Ontario, NDP is currently our best shot.https://t.co/38fSOvtcf4