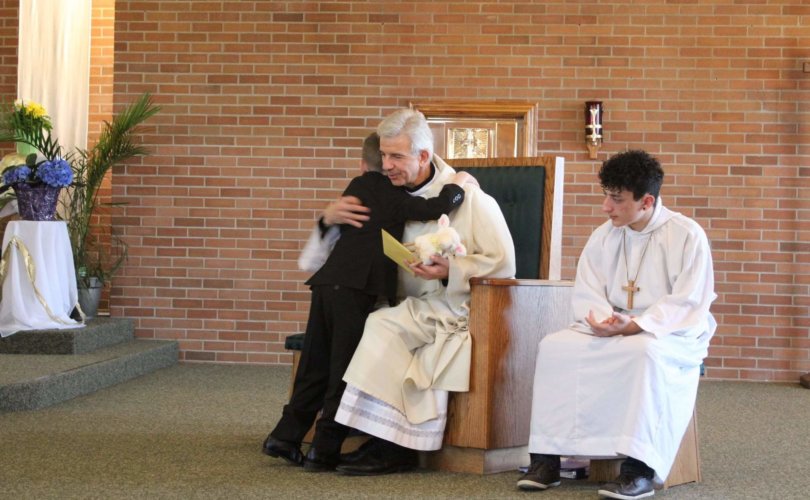 WINDSOR, Ontario (LifeSiteNews) – A priest in the Diocese of London, Ontario has been removed from active duty due to punitive measures by the diocesan administration relating to his non-compliance with the diocese-wide COVID jab mandate.

The news of Father Tony Del Ciancio being placed on a leave of absence was made known in last weekend’s parish bulletin from Our Lady of Perpetual Help in Windsor, Ontario.

The message, which was written by Father John Comiskey, the diocese’s Moderator of the Curia, stated that “Fr. Tony has been given a leave of absence for failure to produce ‘proof of vaccination’ as outlined in the diocesan ‘COVID-19 Vaccination Policy.’”

In October, Bishop Ronald Fabbro mandated the abortion-tainted COVID inoculation and threatened priests and employees of the diocese if they failed to comply.

“Failure to comply with this policy could result in disciplinary action (which includes being placed on an unpaid leave of absence), up to and including termination of employment for just cause,” he wrote.

In addition, he said that clergy “who refuse vaccination will be removed from current duties. If possible, they will be re-assigned by the Bishop at his discretion to roles that do not feature public contact, and their stipend may be adjusted accordingly.”

It was not stipulated in the news of Father Del Ciancio’s suspension whether he will still be compensated with his normal stipend or if he will be placed in another role.

Father Comiskey also wrote, “The Policy is based on the best medical and scientific evidence for stopping the pandemic.”

This was written in contrast the mounting evidence that the abortion-tainted COVID jabs do not stop the spread, as the Province of Ontario is reporting an overwhelming majority of PCR-positive COVID cases among those doubly jabbed, and as the rate of positive cases is higher in the double vaccinated.

Comiskey wrote that “[w]e respect everyone’s privacy in this matter.”

This was said despite the fact that by announcing Father Del Ciancio’s removal from active ministry, Comiskey had made a public statement about the priest’s compliance with a medical mandate that pertains to information that Comiskey otherwise views as part of ‘everyone’s privacy.’”

The punitive measure leveled against Father Del Ciancio based on his desire to keep his own medical information private was announced to an entire parish through the bulletin, and by extension anyone with internet access.

Father Comiskey intimated in his communiqué that the Diocese of London respects a given priest’s right to medical privacy while at the same time enforcing a policy that de facto announces the medical information of the priests under the jurisdiction of the diocese.

The information relayed in the parish bulletin also makes it clear that Father Del Ciancio will not be able to correspond with his parishioners by way of his normal diocesan phone number, as the faithful were told not to call him at his normal number.

“Please do not leave messages for Fr. Tony on his Ext. (22). He will not receive them as he is no longer working in the office,” the notice read.

An email has been sent to the diocese, the parish, and to Father Comiskey, but no reply has been provided yet.

Contact information for the various diocesan departments and personnel can be found here. And the parish that Father Del Ciancio was suspended from can be reached at this link.