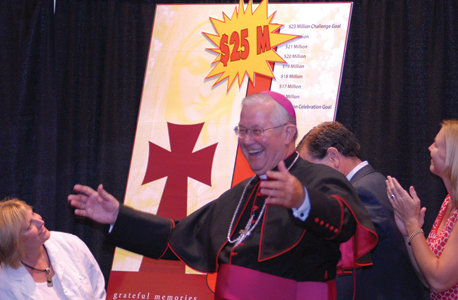 JEFFERSON CITY, Missouri, January 11, 2018 (LifeSiteNews) — The vicar general for the Diocese of Jefferson City, Missouri, threatened a diocesan priest with “canonical rebuke” last June if the priest did not remove articles from LifeSiteNews and another outlet from his parish bulletin, saying they were inaccurate and slanderous.

Father Joseph Corel, the vicar general, acknowledged in a voicemail to the priest that after “information about Hillary Clinton” appeared in the priest’s parish bulletin the diocese periodically monitors the bulletins.

Father Corel took issue with two articles concerning the diocese’s controversial “Pastoral Process of Accompaniment and Dialogue” that were planned for the forthcoming bulletin. He directed Father Richard Frank, then pastor of St. Boniface Parish in Brunswick, to remove the articles on that topic or face “canonical rebuke” for “causing disharmony.”

He also told Father Frank not to include any articles on the diocese’s controversial “Pastoral Process” in the bulletin.

“We did check your bulletin for June 4, and you did show articles from Church Militant and LifeSite,” Father Corel stated. “None of which is helpful to the diocese, none of which is accurate about the document, and it’s slanderous.”

“And therefore I expect you to take down that bulletin from your website, take those articles out and repost it, and any articles about the document,” he stated.

“Secondly, you are not to run that bulletin for your parish,” continued Father Corel. “If you’ve already made the copies, you are to remake new copies without those articles in it.”

“If you choose to not do this, I will send you a canonical rebuke,” he said, “telling you that you are causing disharmony amongst the parishioners and amongst our church.”

LifeSiteNews asked the diocese for comment on Father Corel’s statement that LifeSite’s story was inaccurate and slanderous, and to explain what information on then-Democratic presidential candidate Hillary Clinton was problematic for parish bulletins and why.

The diocese said through its communication director that it had no comment on that part of the inquiry.

Father Frank had included in one fall 2016 bulletin an article from the Missouri Family Life Council outlining where Clinton and Republican candidate Donald Trump stood on the right to life. In another bulletin around that time, an article from Church Militant was included that concerned Clinton’s stance on religious liberty, including her comment that religious beliefs have to be changed.

LifeSite’s inquiry with the diocese asked as well about Father Frank’s status in the diocese. LifeSite had received reports that the priest may have been barred from filling in for other priests and that there have been instances where individuals were prohibited from calling Father Frank to assist at diocesan functions.

Father Frank retired in July 2017. Retired priests are regularly utilized in dioceses across the U.S. when active priests go on vacation or for various other instances of need. This is especially done in areas where there is any sort of priest shortage.

The Diocese of Jefferson City expressed concern over its priest numbers in its “Update on Pastoral Planning for Diocese” document disseminated last October to pastors, parish administrators and secretaries for inclusion in bulletins throughout the diocese.

“A sobering situation that we are trying to do our best to prepare for has to do with our priestly resources,” it said in part.

Father Frank confirmed for LifeSiteNews that he suspected he wasn’t getting called to fill in, and that he was “persona non grata” in this regard.

There have been times he could have been asked to fill in but was not, he said. And, in fact, he had an offer rescinded for regular substitution that was made before his retirement and his discussion last summer with LifeSiteNews about the diocesan “Pastoral Process.”

“People don’t like the truth,” said Father Frank, but “when you tell the truth, Our Lord protects that.”

LifeSiteNews also inquired with the diocese about the prospect of a canonical rebuke for Father Frank because he included the LifeSite and Church Militant articles in the St. Boniface bulletin, and whether there had been any prohibition of his priestly ministry.

“We believe it is not appropriate to make public comment on such communications,” the diocese said in a statement. “Fr. Frank is welcome to bring any matters he wishes to discuss to the Bishop. At the present time, he has not chosen to do so.”

The voicemail that Father Corel left last June for Father Frank was published by the “30 Pieces of Silver” blog. Catholics in the diocese encouraged Father Frank to agree to its release after it became increasingly evident he was being passed over in priestly ministry.

The blog was created by diocesan families concerned by the “Pastoral Process” for its apparent upending of Catholic moral teaching.

The “Pastoral Process” not only allowed students who identify as “transgender,” LGBTQ, or live with same-sex couples to attend its schools, but also stated, “Wherever possible, enrollment is the goal.”

The proposed diocesan plan caused significant controversy among members of the diocese. They charged that it was covertly drafted by members of diocesan leadership, parts of it conflicted with Church teaching, and that it embraced gender ideology and immoral sexual behavior. Critics also say it would put children in diocesan schools at risk.

Catholic families in the diocese were upset as well that no parents or pastors with parish schools were consulted in crafting the “Pastoral Process of Accompaniment and Dialogue.”

They say its rollout was timed to best allow for any pushback to cool over the summer, and also that their expressions of concern fell on deaf ears at the diocesan chancery.

The controversy gained notice outside the diocese as well, with the contentious plan considered the first of its kind for a U.S. diocese. LifeSite and Church Militant reported at that time and since then about the Jefferson City controversy.

Jefferson City Bishop John Gaydos has defended the proposed plan to allow transgender-identifying students to register in diocesan schools, insisting to priests in an internal memo that it promotes Catholic moral teaching. He dismissed opposition and subsequent media reporting as “public furor” coming from “outside our diocese.” He also called the pushback “falsehoods” and a “misinformation campaign.”

“Students may not advocate, celebrate or express same-sex attraction in such a way as to cause confusion or distraction in the context of Catholic school classes, activities or events,” it states in part. Other diocesan schools were expected to follow suit.

Beginning last June, local Catholics held prayer vigils at the Shrine of Our Lady of Fatima adjacent to the diocesan chancery on the 13th of each month with the intention of preserving Catholic principles in Jefferson City diocesan schools, drawing Missouri Catholics from miles away.

An additional prayer vigil was held October 7 outside the Cathedral of St. Joseph while a Mass commemorating the 50th anniversary of the Missouri Catholic Conference was celebrated inside. Bishop Gaydos was present at the Mass, along with all of the state’s bishops and Apostolic Nuncio Cardinal Christophe Pierre.

In an incident captured on video, the group of Catholics prayed the rosary and held signs stating, “Bishop Gaydos: Stop the Process.” During the prayer vigil, diocesan newspaper editor Jay Nies snapped at the group praying, “He can’t hear you!”

Cardinal Pierre announced Bishop Gaydos’ retirement on November 21, months before the bishop reached the regular retirement age of 75 this August. Bishop Gaydos is continuing as Apostolic Administrator for the Jefferson City diocese until the ordination and installation of Father Shawn McKnight, a priest of the Diocese of Wichita, Kansas, and the new bishop of Jefferson City.