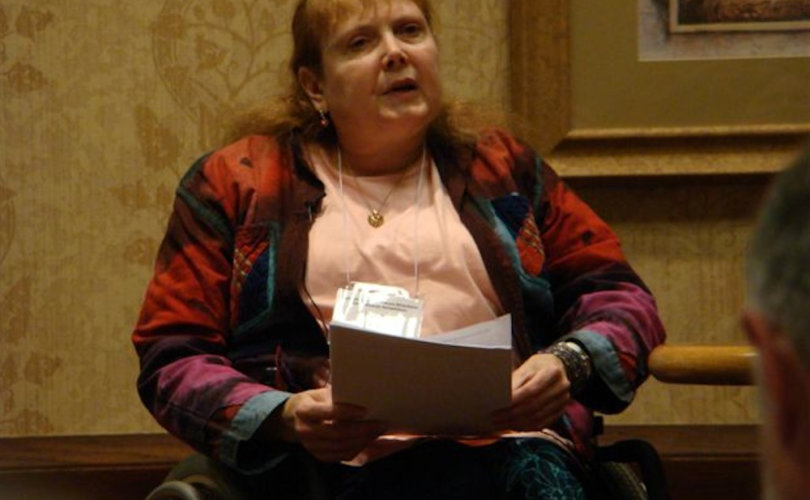 December 2, 2016 (LifeSiteNews) – Suffering has value, meaning and a purpose, and despite the world’s attitude that it should be avoided and eliminated, suffering is actually good news for Christians.

This is the message that pro-life and disability advocate Colin Harte shared on the third anniversary of the death of a beloved disability rights and pro-life advocate, who herself suffered greatly throughout her life.

Alison Davis was a UK woman born with spina bifida who later developed other conditions such as osteoporosis, arthritis, and chronic obstructive pulmonary disease. She lived daily with extreme pain, and for many years she wanted to “end it all.”

But instead she turned from being pro-abortion to pro-life. And she was someone who had tried to end her own life at one point but would go on to become a most powerful advocate against assisted suicide and euthanasia, for 30 years representing the Society for the Protection of Unborn Children’s (SPUC) disability rights group “No Less Human” in the UK.

Davis advocated that individuals with disabilities “deserve the same kind of help routinely given to those who do not have a physical condition but who feel suicidal.”

“She turned from being an atheist to being a Catholic,” Harte said, “and the most extraordinary Catholic at that. One who loved God and human beings intensely.”

Harte was Davis’ caregiver and constant companion from 1987 until her death. The two established a charity for children with disabilities in need of care and support in South India in 1995. He believes Davis will be recognized by the Church one day for her holiness and sanctity.

Davis passed away December 3, 2013, and those close to her believe she still has things to tell the world and the Church about suffering.

Davis gave witness to the fact that the child in the womb, no matter how profoundly disabled, how long they had to live, or how they were conceived, has an infinite value, he said, “That’s something that she taught. And through her witness to life at the end of life, she’s a witness to the value of suffering.”

“She’s certainly somebody who, is the most extraordinary person I ever knew,” Harte continued.

“She was an amazing woman,” Schadenberg told LifeSiteNews. “She was one of those people in life that you fall in love with.”

“She was a profound woman to say the least,” Schadenberg recalled. “Her message broke through. You might not always agree with what she said, yet she could speak to anyone and have a incredible effect.”

“She was truly a fabulous woman. She's someone I miss,” he added. “She gave everyone around her great hope because she was always so kind.”

Davis had strayed from her faith in God while studying sociology in college, writing on this time in her life, “It was largely because I wanted to live a lifestyle I knew was incompatible with the Christian faith.”

She was married for 10 years, during which she “tried very hard to find happiness without God,” but the marriage failed.

While in college, Davis had strongly supported the “right to choose” abortion, but that changed after she read about the case of a baby girl named Louise, born in 1979 with the same disabilities as hers and who was deliberately starved and dehydrated to death at a UK hospital. The case, which received worldwide coverage, shocked her greatly, Davis’ obituary in the Catholic Herald stated after her death.

Two years later, she had written an op-ed published in the Guardian condemning the killing of disabled newborns, prompting SPUC to contact her with the argument that killing newborns with disabilities was tied to killing the unborn. Davis did not accept the contention at first, but eventually became pro-life and began working for “No Less Human” full time in 1983.

Her suicide attempts occurred in the years that followed the end of her marriage and she encountered other personal difficulties. It was then that she also began to seek peace through God.

A pilgrimage to Lourdes helped her to understand that she and the others there who were ill and suffering were very much loved by God in their suffering,

In 1987, she met Harte, who worked for SPUC and eventually became her caregiver for the rest of her life. Harte thought he’d be with her for a few months, as it didn’t seem she had longer than that to live, but Davis lived for another 24-plus years.

Christians are in danger of adopting the world’s attitude on suffering, Harte told LifeSiteNews. But even though it’s difficult, he said, suffering is something we should rejoice over, and this is the lesson that Davis’ life still brings.

Davis experienced great physical, social, emotional, mental, and spiritual suffering, “And yet she could say as she did, that suffering with Christ was not merely a privilege, but the greatest privilege possible in this world.”

“The fact that she suffered so intensely could say it and believe it with the utmost sincerity and authenticity is a message we have to hear and try to understand and then incorporate into our lives,” he said.

“For Alison, the time that she heard about offering up suffering became for her a source of joy. It made sense to her sufferings,” Harte continued.

“She was in chronic pain all of the time and yet she was always a joy to be around,” he said. “That to me was an incredible gift to be around.”

“Instead of focusing on her pain or on her suffering,” Schadenberg stated, “she focused on others, and that gave her joy.”

Harte pointed out that so many think human life is just about experience, failing to understand the human person in terms of self-giving.

“But, fundamentally we are made to love,” he said, “made in the image of God who is love.”

Jesus Christ showed us this through his example, Harte said, coming to reveal the Father, and in doing so, leaving the image of himself on the cross — himself suffering.

“The world hates suffering,” Harte explained. “It hates it so much, it says, “If you suffer, you’re better off dead; if you suffer, let’s hasten death; let’s do anything we can to avoid suffering.”

“It hates suffering,” Harte continued, “and yet for the Christian, it’s good news.”

Davis once stated, “If euthanasia had been legal, I would certainly have requested it and I wouldn’t be here now.”

Although she made several serious attempts at suicide, she was saved by the intervention of friends, later changing her mind and recognizing the danger of euthanasia being legal and available to someone struggling as she did.

“I’ll always be grateful to the friends who saved my life, though I wasn’t at the time,” Davis had said of the experience. “And I’m especially thankful there was no possibility of persuading my doctors to legally help me die.”

Her legacy remains as living example of how someone can suffer greatly, be regarded with rejection by society, and still exemplify human dignity, Christ’s love, and His desire for us to be with Him in this life and beyond.