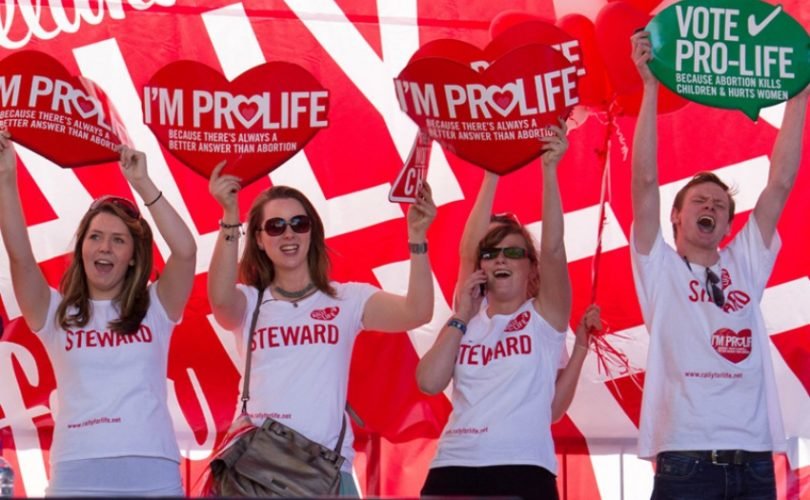 Students participate in the All Ireland Rally for Life held in Dublin, 6 July 2013The Life Institute

Irish university students who uphold Christian teaching on sexuality are increasingly victims of an “aggressive secularism” that is actively seeking to marginalize and silence them, according to Irish pro-life groups and one Irish priest.

Fr. David Barrins told the Independent this week, “It’s discrimination and it keeps people silent by using very evocative terms like homophobic and bigot … it's very hard to fight that because once you’re labeled, it seems to stick.”

Fr. Barrins said that anti-Catholic discrimination is becoming the norm in Irish universities, and is behind the lack of student groups that fully represent the Church’s teaching.

“There is quiet fear and nobody wants to report it, simply because you can bash Catholics and it seems to be acceptable and that seems to be reinforced by a lot of the reports I get on these things over cups of tea.

“You’re a bigot if you’re a Catholic student or if you dissent from the prevailing orthodoxy. You have to keep your mouth shut and your opinions to yourself,” he said.

It’s not just specifically pro-life groups that are getting the cold shoulder from Ireland’s universities. Last year, the Legion of Mary was kicked off the campus of the National University of Ireland in Galway, on the grounds that since they upheld Catholic teaching on sexuality, they were “discriminating” against homosexuals. The group had refused to endorse homosexual behavior, instead urging students to “develop an interior life of chastity, which is the universal call to all Christians.”

Fr. Barrins said that anti-Catholic discrimination has become systematic at University College Cork (UCC), citing one instance during the university’s Sexual Health Awareness Week this year, when a “massive pink penis” was set up outside a campus Catholic chapel and “condoms were handed out to people going to Mass.”

Niamh Uí Bhriain of the Life Institute, Ireland’s leading pro-life education group, told LifeSiteNews that Fr. Barrins has highlighted a serious issue that students have been bringing to the attention of pro-life organizations.

“This censorship is not coming from the rank and file student body,” she said. “It’s coming from student unions and boards who are dominated by left-wing, politically-motivated activists who are extraordinarily intolerant of any diversity of opinion when it comes to religion or the pro-life issues.”

She added that it is not just student societies but is also coming from the administrative authorities of the universities. “It is just appalling: a complete denial of free speech. If this were happening to any other group of students the media in Ireland would be running story after story about censorship and bigotry and the need for inclusivity and diversity. The universities are embarrassing themselves by allowing it to happen.”

But the issue is also being brought to light by students who are not willing to put up with it. Some groups, Uí Bhriain said, are bringing their complaints about this discrimination to university authorities.

One student, Kevin White said that at UCC, “hundreds of students supported joining the pro-life society ‘Love Life’” but that the university has refused to register the group.

“It reflects really badly in the college to be honest,” White told LifeSiteNews, “especially when pro-life students have organised really well-attended debates and events in the past. People are very uncomfortable with what they see as censorship in the college.”

White added that the pro-life students at UCC planned to fight on to have the society registered.

But it is not a universal phenomenon. The pro-life society at Maynooth University has organized successful pro-life stalls recently, and Uí Bhriain said that with this example in mind, “pro-life students will make their voices heard,” at UCC and elsewhere.