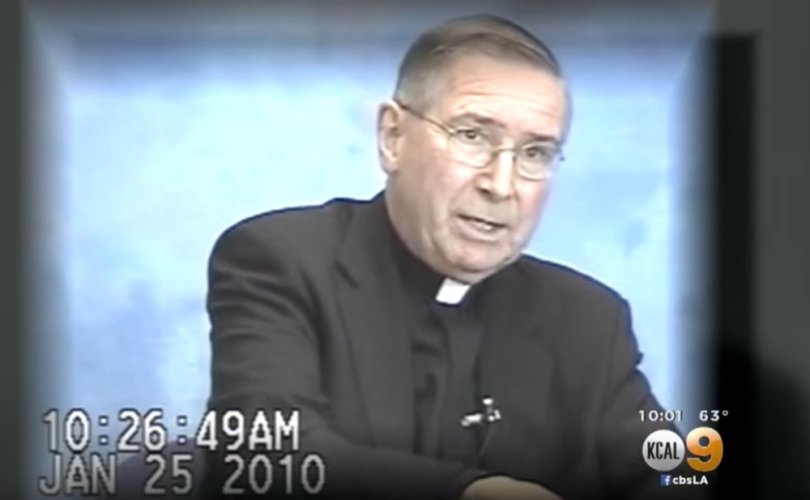 Disgraced Cardinal Roger Mahony is deposed over the priest sex abuse scandal in 2010.

SCRANTON, Pennsylvania, February 19, 2018 (LifeSiteNews) – Pope Francis appointed disgraced Cardinal Roger Mahony to be his special envoy to the Catholic Diocese of Scranton’s 150th anniversary Mass. But after uproar, the diocese removed the announcement of Mahony’s visit from their website and told LifeSiteNews the cardinal informed them “late last week” that he’ll be unable to attend.

“We are most grateful to our Holy Father for appointing Cardinal Mahony to be his personal envoy for this special celebration, and we are honored that the Cardinal has so graciously accepted this invitation,” Scranton Bishop Joseph C. Bambera said in this press release. “This expression of the Pope’s pastoral support is another blessing as we mark the founding of our Diocese, and we look forward to welcoming His Eminence Cardinal Mahony to celebrate this historic milestone with us.”

Local Catholics then promised to protest the event and expressed to media outlet Church Militant their frustration that the Holy See was sending the disgraced cardinal as its representative.

“Bishop Bambera was informed late last week that his Eminence, Roger Cardinal Mahony, is unable to attend the Mass commemorating the 150th anniversary of the founding of the Diocese of Scranton Mass on March 4, 2018,” Bill Genello, the diocese’s executive director of communications, told LifeSiteNews on Monday.

He sent a lengthy statement on the Diocese of Scranton’s anti-sex abuse policies:

The Diocese of Scranton remains firmly committed to eradicating the scourge of sexual abuse and protecting children.  It is also committed to offering support, compassion and assistance to help survivors of sexual abuse achieve healing. The Diocese maintains a comprehensive array of policies and programs to protect children. Our mission to create safe environments for children includes a zero tolerance policy for clergy, lay employees and volunteers who engage in misconduct with minors; immediate referral to law enforcement; criminal background and child abuse clearances; and education and prevention programs that have trained more than 27,000 clergy, religious, lay staff, teachers, coaches and volunteers. In addition to being in compliance with the provisions of the Charter for the Protection of Children and Young People, the Diocese of Scranton constantly assesses its procedures to ensure that we are following our policies.

Mahony, who as the archbishop of Los Angeles covered up priestly sex abuse while defending Communion for pro-abortion politicians and targeting EWTN’s orthodox Mother Angelica, was disciplined in 2013 by his successor Archbishop Jose Gomez. Gomez banned Mahony from “any administrative or public duties.”

As LifeSiteNews reported at the time:

After a court order requiring the Archdiocese of Los Angeles to release documents some of which expose Mahony’s cover-up of sexual abuse by priests, Gomez publicly censured Mahony who retired after 25 years of being Cardinal Archbishop of the city in 2011.

“Effective immediately, I have informed Cardinal Mahony that he will no longer have any administrative or public duties,” said a public letter issued by Archbishop Gomez Thursday.

The documents, some 12,000 pages, show that Mahony purposely concealed from the public his knowledge of priests who had committed sex crimes with youth, transferring the perpetrators after they received counseling only to have them sexually abuse again and again.

The abuses were so severe that current Archbishop Jose Gomez commented Thursday, “I find these files to be brutal and painful reading. The behavior described in these files is terribly sad and evil.”

“It appears that Mahoney's participation was not the decision of the Bishop,” Patricia Farry, one of the concerned Catholics, told Church Militant. “Secondly, to whom would we register our complaint? The Bishop's office does not even answer legitimate, relative questions which arise from that office, let alone that of the Pope.”

Pope Francis’ appointing of Mahony as his special envoy came just before news emerged about the pontiff’s own role in the promoting rather than punishing of sex abuser and sex abuser-enabling clerics.

Pope Francis claimed he’d never received any information about the role Chilean Bishop Juan Barros had in child sex abuse. But it turns out Cardinal Sean O’Malley had personally delivered him a letter from a victim.