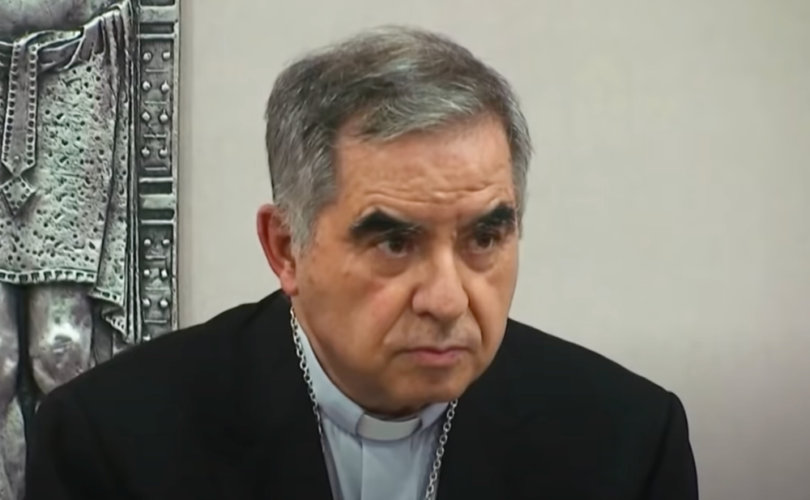 VATICAN CITY (LifeSiteNews) — The disgraced former substitute in the Vatican’s Secretariat of State, Cardinal Angelo Becciu, has stated that Pope Francis will re-instate him as cardinal at the upcoming consistory, despite Becciu’s still ongoing financial corruption trial.

L’Unione Sarda reported that, when speaking to members of the congregation at a private Mass in Sardinia on Sunday, Cardinal Becciu claimed he had been informed by Pope Francis himself of his upcoming re-instatement as cardinal.

“On Saturday, the Pope phoned me to tell me that I will be reinstated in my cardinal duties and to ask me to participate in a meeting with all the cardinals that will be held in the coming days in Rome,” the 74-year-old Becciu stated.

L’Unione Sarda reported that Becciu is due to arrive Rome on Thursday, where he will take part in the upcoming Consistory of Cardinals August 27.

According to Becciu, he will also take part in the general meeting Pope Francis is holding with the assembled cardinals following Saturday’s Consistory.

Italian news agency Ansa reported that Becciu spoke of how he was “very moved by this gesture of the Pope,” and that he “reconfirm[ed] my full communion with him [Francis].”

LifeSiteNews contacted the Holy See Press Office seeking confirmation of Becciu’s statements, and will update this report upon receiving a response.

However, Crux reported that a “Vatican source” suggested to the news agency that the papal invitation might not mean a full re-instatement, but just a call to participate in the consistory and meetings.

After the Vatican initiated its own corruption investigation into Becciu’s dealings, in late 2020, Francis accepted Becciu’s resignation, when the cardinal renounced his privileges as a cardinal – while retaining the title – and resigned from his post as Prefect for the Congregation for the Causes of Saints.

— Article continues below Petition —
Defend the Rosary: The Atlantic should apologize for anti-Catholic attack
Show Petition Text
7548 have signed the petition.
Let's get to 9000!
Thank you for signing this petition!
Add your signature:
Show Petition Text

The disgraced prelate was then indicted July 2021 by the Vatican Tribunal with nine others also indicted for corruption.

Becciu was personally charged with “embezzlement and abuse of office, also in collaboration, as well as subornation.” He is also accused of having channeled money to his brother’s charity, using funds overseen by the Secretariat of State, €100,000 of which came from the Pope’s personal charity, Peter’s Pence.

The corruption trial recently passed its one-year anniversary, and further hearings are scheduled for September and October, following a summer recess. Becciu continues to deny wrongdoing.

Becciu’s lawyers also claimed in 2020 that Pope Francis himself had supported the London investment deal. The Vatican recently sold the London building involved in the ongoing investigation, with a reported loss of $200 million.

Due to the as yet unresolved nature of the financial corruption trial, the news of Becciu’s apparent renewed favor in the Vatican has surprised observers.

The Pope calls #Becciu : “Come to the Consistory”. The cardinal of #Pattada reinstated in functions

It was all political theater from the the master of low cunning https://t.co/YtdgPy4fnk