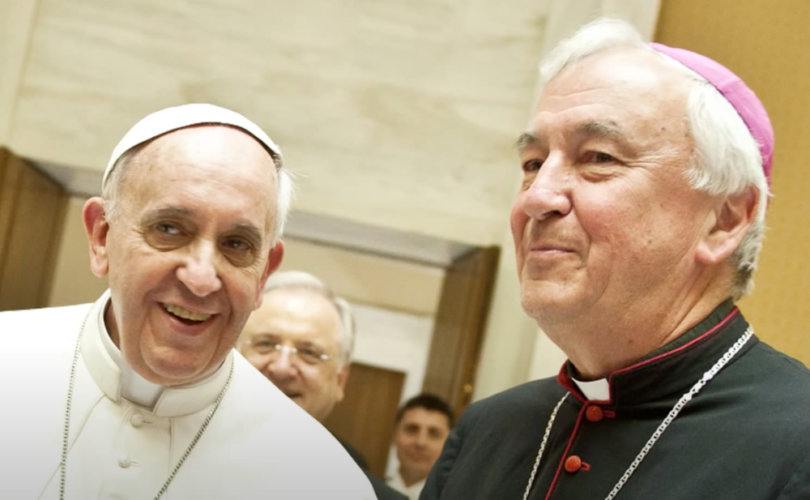 Pope Francis and then Archbishop Nichols in 2014CBCEW/YouTube screenshot

WESTMINSTER, England (LifeSiteNews) — The U.K.’s Cardinal Vincent Nichols has banned any confirmations in the traditional rite in his Archdiocese of Westminster, following the Vatican’s further clampdown on the traditional liturgical rites, in a move likened to the persecution Saul inflicted on the early Church.

The Latin Mass Society (LMS) of England and Wales said in a press release January 24 that Cardinal Nichols had canceled the annual confirmations which took place in his archdiocese, with immediate effect.

Dr. Joseph Shaw, chairman of the LMS, wrote that the Cardinal had informed the LMS via letter that there would be no further celebrations of the sacrament of confirmation in Westminster, but did not indicate whether the Cardinal had elaborated on his decision.

The Latin Mass Society regrets to report that Cardinal Vincent Nichols has made the decision (communicated to the Society by letter) that the Sacrament of Confirmation is not to be celebrated according to the 1962 liturgical books in the Archdiocese of Westminster. The annual celebration which has for nearly twenty years been organised by the Latin Mass Society at St James’ Spanish Place, at which candidates were confirmed by an auxiliary bishop of the Archdiocese — and on one occasion, by Cardinal Raymond Burke — will accordingly not take place this year, or until this decision is reversed.

Shaw added that another planned confirmation, to be celebrated by Archbishop Bernard Longley of Birmingham, had also been canceled.

“These celebrations have been joyful occasions, attended by many children and young adults, their families, sponsors, and friends,” continued the LMS. “They have been clear expressions of the importance the Society’s supporters attach to their link with their bishops, and our bishops’ pastoral concern for us. They have enormously strengthened the sense of unity in the Church: both our sense of belonging, and, I believe, the bishops’ own sense that we are indeed sheep of their flock.”

Shaw observed that Nichols’ cancelation of the sacrament implies the “loss” of the “serene co-existence between the new and old liturgical forms … It will cut off many from accessing it [confirmation] in a form ‘particularly suited to them’ (as Pope Benedict expressed it).”

“We hope that the Bishops of England and Wales come to reconsider their decision, and allow once more the ancient Roman liturgy in all its manifestations to be part of the legitimate diversity of liturgical forms we have in this country,” Shaw added.

LifeSiteNews contacted Nichols and the archdiocese, seeking comment, and was directed to the CDW’s December Responsa. “The Responsa ad Dubia from the Congregation for Divine Worship and the Discipline of the Sacraments indicates that all use of the pre-Conciliar Pontificale Romanum is not permitted,” stated the archdiocese.

Cardinal Nichols’ move against the traditional rite of the sacrament comes after the Vatican announced further restrictions on the Latin Mass in December 2021, following Pope Francis’ July 2021 motu proprio Traditionis Custodes. In its December Responsa ad dubia, the Congregation for Divine Worship and the Discipline of the Sacraments (CDW) specifically ruled out bishops granting permission for the use of the Pontificale Romanum, which contains the sacraments of confirmation and Holy Orders.

In November 2021, letters between Nichols and the staunchly anti-traditionalist head of the CDW — fellow Englishman Archbishop Arthur Roche — were leaked, revealing Nichols’ July request for clarification on the future of the Latin Mass in England after the release of Traditionis Custodes. Nichols specifically noted the “difficulty” of how to respond to the LMS in light of Traditionis Custodes, since the group’s raison d’être “is not in accord with the mind of the Holy Father.”

“We would welcome any advice from the Congregation on how best to deal with this situation,” wrote Nichols.

Shaw decried that Cardinal Nichols’ move against the traditional sacraments signaled the end of the support for traditional Catholics in England and Wales.

While this situation continues, it is implied that the liturgy of the Saints, Doctors, Martyrs, and holy Popes of twelve centuries and more is suspect, and that we ourselves are not worthy of the pastoral consideration given to all sorts of groups in this country: Polish Catholics, Syro-Malabar Catholics, Ukrainian Rite Catholics, and many others, who receive pastoral care distinct from the standard English-language Novus Ordo liturgy.

He was supported by English theologian Fr. Thomas Crean O.P., who echoed the call for Nichols to reverse his decision, alluding to Saul’s persecution of the early Church.

“Either the traditional rites of the Latin church are good or they are bad,” he wrote. “If they are bad, what reason have we think that the ones proposed to us now are good? If they are good, why must they be suppressed?”

Nichols’ move has drawn criticism from Catholics far and wide. Crisis Magazine’s Eric Sammons quipped, “The beatings will continue until you see how loving we are!”

The beatings will continue until you see how loving we are! https://t.co/GiRpEhXFGn

Deacon Nick Donnelly condemned Nichols as being an “autocratic tin pot dictator towards faithful Catholics,” and an “[a]uthoritarian clericalist.”

“In light of the Canon law guidance which we have published, which confirms that the recent Responsa ad Dubia issued by the Congregation for Divine Worship, which appear to prohibit the use of the 1962 Pontificale, does not have the force of law,” closed Shaw, “we call on His Eminence, Cardinal Nichols, and the Bishops of England and Wales, to reconsider their position, before real pastoral harm is done, and damage to the fabric of unity which will not easily be repaired.”

While Nichols has moved to sanction traditional Catholics, he has a history of promoting homosexuality and offering LGBT Masses, and was accused of ignoring allegations of child-sex abuse in favor of protecting Pope Francis’ reputation.

Pope Francis has accepted Nichols’ resignation, due to old age, but told the cardinal to remain in office until “other provision is made.”