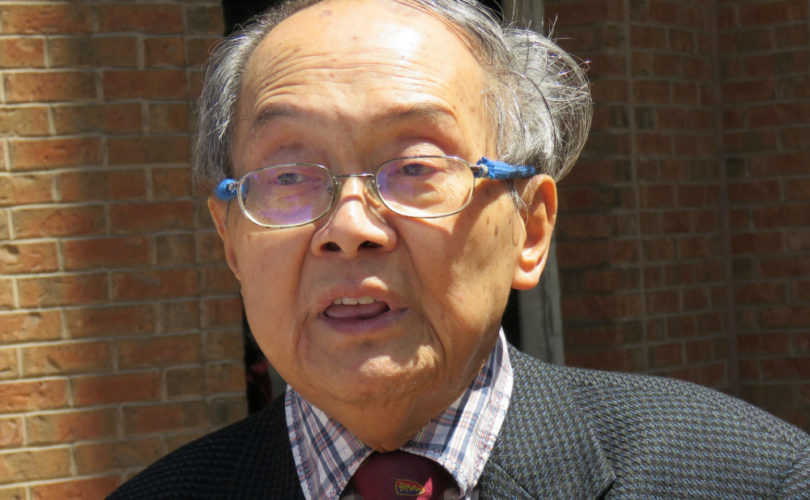 At Sim’s cluttered ground floor clinic in an old house on Friel Street, medical instruments were regularly found to be rusty and debris-covered, sterile gloves were used beyond expiry date, and an unlocked refrigerator containing vaccines stood next to his musician wife’s harps taking up space in a congested waiting room.

Sim had a form letter threatening patients to be quiet or their surgery would be canceled, and would send women sedated on Valium and Oxycodone home alone in a taxi following an abortion.

The abortionist would use a manual hand-held suction and plastic catheter attached to a syringe to complete failed medically induced abortions, even though he had been ordered to stop doing surgical abortions.

At Tuesday’s hearing, the College ordered the stooped-shouldered, elderly obstetrician-gynaecologist to pay costs of $4,460, but exacted no further penalty because Sim had agreed to resign from the College and never to reapply for registration.

However, until his resignation June 30, Sim remains bound by the College’s May 21, 2014 order that he perform no abortions in his office on 371 Friel Street.

Dressed in a dark grey suit and wearing Ugg boots, the almost five-foot-tall Sim shuffled from his seat to stand impassively in front of the committee members as Watts chastised him for “widespread practice failures of infection control and prevention of infections, lack of even the most basic standards of decontamination, sterilization and cleanliness,” an “insensitive approach to communication” and a “failure to understand the physical and vocal responses of your vulnerable, sensitive and distressed patients.”

According to the Agreed Statement of Facts presented by College counsel Lisa Spiegel, the June 2 hearing resulted from complaints and multiple inspections dating back to October 2012. The abortionist was accused of failing standards of care for 24 patients, and refusing to send Patient “A” for a second opinion.

But Sim, who obtained his degree from the University of Malaya in 1966, had already come to the College’s attention in May 2011 when his abortion clinic failed an inspection. In July of that year, the College ordered him to stop performing procedures, including therapeutic abortions.

According to a January 2014 inspection report, Sim said he stopped doing surgical abortions following that decision and subsequently donated his two dilation and curettage machines to Africa through the Ontario Medical Association.

But he continued to do medical abortions in his office, and by the summer of 2013 was again under investigation.

Seven inspection reports dating from July 9, 2013 to November 17, 2014 found that, among other things, Sim’s “practice of medically induced therapeutic abortion is of harm and danger to the patients, because he converts many of these into surgical abortions if they do not succeed initially.”

It was recommended that Sim “cease from performing medical or surgical therapeutic abortions in an office setting.”

The July 9, 2013 report also noted that the number of Sim’s misoprostil abortions “seems to far exceed what the average obstetrician/gynecologist in Ontario does.”

Following a November 2013 surprise inspection, Sim agreed “to no longer perform any aspect of a surgical termination including the removal of retained products of conception following a failed medical abortion.”

An inspector’s review of 15 of Sim’s charts at that time noted that in one case, “it appears that a vacuum extraction type procedure was carried out followed by a curettage and then forceps used to remove any residual tissue. This is very similar to a suction D&C which is generally performed in an operative setting under appropriate anesthesia.”

The review noted that Sim “has 10 and 12 mm curettes present, which are quite large in diameter and may be extremely painful to some patients…Chances of perforation increases with the use of curettage.” Sim’s clinical notes were in many cases inadequate or incomplete.

Sim wore his white coat while performing abortions and other procedures and afterward, which is “concerning” because it might transmit “blood-borne pathogens.” He delegated the reprocessing of surgical instruments to his staff, who seemed confused as to how to properly sterilize instruments, some of which were found to be rusty or coated with debris. Sterile solution and gloves were beyond expiry dates.

The College’s June 2 reprimand noted that “it is always disheartening to see a physician appearing before this committee at the end of a valued career, especially so when that career has been in an area which has provided controversy, conflict and even threats of harm to its practitioners and which has provided help for women, often in extremely vulnerable and distressing circumstances.”

Sim has been committing abortions in Ontario since 1975.

When asked how old he was, Sim said: “Confucius says you are only as old as you think.” He said he has many things to do after he resigns at the end of the month, including playing the organ in church, that he did abortions to help women, and that he has a knack for making “difficult things look easy.”

When asked by LifeSiteNews if he ever considered the fate of the unborn child, Sim replied: “I’m a doctor, not a priest.”

Sim practices medicine two days a week in Quebec, although his lawyer, Jeff Mutter, told the committee that he does not do abortions in that clinic. College counsel Spiegel said the Quebec College will be informed of the Ontario College’s decision.