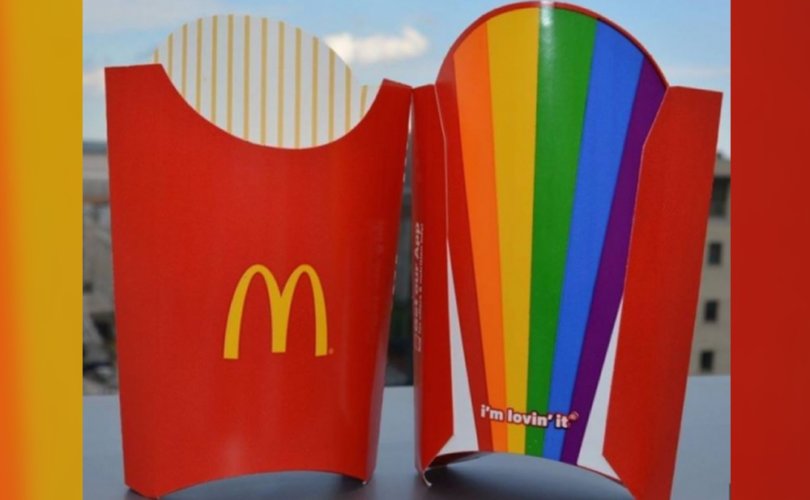 “The rainbow fry boxes are a fun way to show our support of the LGBTQ community, using one of McDonald’s most iconic and recognizable items,” Cathy Martin of the restaurant corporation’s “Pride Network” stated in a press release.

She added that McDonald’s is “proud to honor and celebrate the LGBTQ community, including our employees, customers and beyond – each and every day.”

McDonald's is acknowledged as a corporate leader in homosexual affirming and enabling policies.  As OneNewsNow reports, “The Golden Arches is a major player and sponsor in promoting homosexual behavior across the nation.”

McDonald’s franchises in the D.C. area are also big sponsors of the homosexual group Capital Pride Alliance, which seeks to normalize homosexual practices across the country.

Not all customers are happy with the gay fries. Evangelist and online personality Joshua Feuerstein issued a call for Christians to boycott the fast food chain.

“I’m tired of corporations trying to influence our families like this,” Feuerstein continued.  “SHARE THIS and let people know to STOP EATING at McDonalds!”

“Plus, their food is crap. Really,” the evangelist added.

Feuerstein received media attention in 2015 when he exposed the hypocrisy of Cut the Cake, a Longwood, Florida bakery.  He videoed his order for a sheet cake with the message, “We do not support gay marriage” on it. After the owner refused to write the message, Feuerstein used the refusal to highlight the double standard in law where numerous Christian businesses have been forced to offer services to homosexuals and violate their sincerely-held beliefs.

Feuerstein has since been the target of vitriol from gay advocates. He was even threatened with possible felony charges for requesting the cake.

A San Francisco McDonald’s spokeswoman defended the Pride Fries, saying that the corporation has “a long history of supporting diversity and inclusion of its employees.”

McDonald’s added “sexual orientation” to its anti-discrimination policy in 1999, and updated it in 2013 to include “Gender Identity and Expression.” The fast food giant began offering homosexual partner benefits identical to married spouses in 2004.  McDonald’s PRIDE Network for its employees was instituted in 2005.