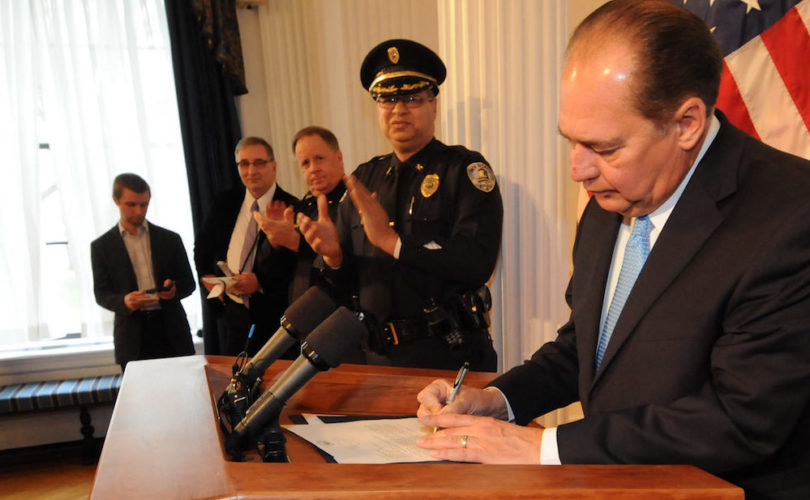 “This bill is overbroad and unduly burdens a woman's fundamental right to privacy,” Governor Earl Ray Tomblin wrote in his veto message of S.B. 10, which would bar the practice of dilation and extraction (D&E) abortions, yesterday.

That procedure, in which a living child has each limb torn off and extracted from the womb, accounts for approximately 95 percent of all second trimester abortions.

Dr. Anthony Levatino, who performed approximately 1,200 dismemberment abortions, described the dilation and extraction procedure in a video for Live Action, which had been seen more than 2.5 million people on YouTube alone.

“It is sickening to hear this abortion procedure described and realize that a viable baby is ripped limb from limb by tools and then disposed of as if trash, rather than protected as the precious life he or she is,” West Virginia Republican Party Chairman Conrad Lucas said. “It’s sad to see this governor again turn his back on the values of a people here in West Virginia. We must protect the lives of our most precious and innocent citizens – the unborn.”

Pro-life leaders say the ban would safeguard the state from trafficking in human body parts. “By banning this procedure, West Virginia has protected unborn children from abortionists who could use this procedure to harvest baby body parts,” said West Virginians for Life President Wanda Franz.

But the state's pro-abortion movement applauded the governor's action. “Politicians shouldn’t play doctor,” said Margaret Chapman Pomponio, executive director of the WV Free, a socially liberal group. “We are heartened by Governor Tomblin’s decision to place his trust in the women of West Virginia and the health care community.”

Senate President Bill Cole, R-Mercer, vowed, “The Senate will vote to override this veto without delay.” A vote could come as early as today.

The ban passed both houses of the legislature last month by veto-proof margins. The House of Delegates approved the pro-life legislation late last month 86-13, while the Senate passed it on February 17 by a vote of 24-9.

Proponents say the measure “strikes the right balance” in a moderate way. The bill, sponsored by Senator Dave Sypolt and Delegate Lynne Arvon, allows a child to be removed from the womb piece-by-piece as long as the abortionist first “creates demise or death of the fetus” by some other method, such as injection with Digoxin.

The act contains an exception for if a pregnancy would result in the death or permanent physical injury of the mother and allows other methods of abortion to be used in cases of rape or incest.

Dismemberment abortion is already illegal in two states, Kansas and Oklahoma, although judges have halted the laws' enforcement in each case.

West Virginians for Life is encouraging state citizens to contact their delegates and state senators, asking them to vote in favor of the proposal.

The legislature, now under Republican control, has enacted pro-life protections over the Democratic governor's veto in the past. Last March, legislators put a statewide Pain-Capable Unborn Child Protection Act, restricting abortion to the first 20 weeks of pregnancy, into law after overriding Gov. Tomblin's veto.

“I believe there is no greater gift of love than the gift of life,” Gov. Tomblin said as he vetoed that bill.

NARAL is mad we’re calling this a ‘dismemberment abortion.’ But what else CAN you call it?