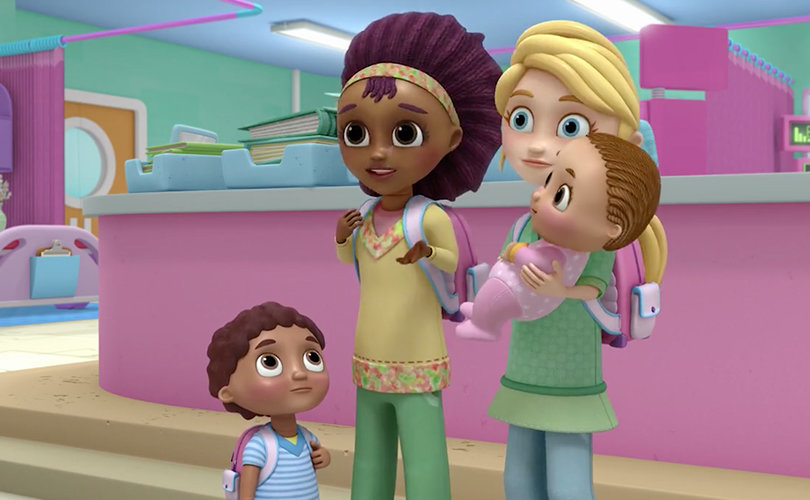 August 8, 2017 (LifeSiteNews) – An August 5 episode of the Disney Junior show Doc McStuffins, which is aimed at preschoolers, featured two lesbian “moms” as the heads of a family.

The show is about an aspiring doctor who “fixes” toys with help from friends.

In the August 5 episode “The Emergency Plan,” a lesbian couple and their children (they're a family of dolls) have to flee their house because of an “earthquake.” The purpose of the episode is apparently teaching children the importance of having an emergency plan.

“With this episode, they see a family that looks like our family,” said Wanda Sykes, a lesbian actress who plays one of the same-sex partners. “We're two moms… it’s going to be very exciting for [my kids] to see our family represented.”

During the episode, one woman and a child are separated from the other woman and child, and then reunited at the end.

Sykes tweeted that she was pleased with the episode promoting same-sex relationships.

So proud to be in this episode. Love is love! #Docmcstuffins https://t.co/WmvWXURnZE

The episode promotes same-sex “marriage” in a “beautiful and positive way,” wrote Sarah Kate Ellis, the President and CEO of GLAAD. “Shows like this reflect our real world, and today that includes the many children being raised by gay and lesbian parents who are all going to celebrate this story.”

One of the episode's authors, Chris Nee, is in a same-sex “marriage.”

“It's hard to know exactly where the boundaries are because they’re always changing in kids' TV,” Nee said in 2012 of whether a same-sex “marriage” would be portrayed on the show. “I will say I have been incredibly surprised by how supportive Disney has been in the process of looking for press for this show. That's a change.”

Earlier this year, the live-action Disney remake of Beauty and the Beast featured an “exclusively gay moment.” The gay subplot was about how “LeFou is somebody who on one day wants to be Gaston and on another day wants to kiss Gaston,” the film's director said.

The director of the Beauty and the Beast remake had said in a 2007 interview that he wishes he could “rip pages out of the Bible” when he stays in hotel rooms, but few seem to have Bibles anymore.