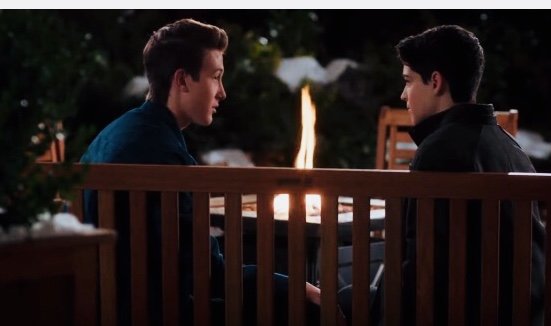 On the Andi Mack show, Cyrus Goodman — a 13-year-old male gay character — confesses on the last episode his feelings for a male classmate, TJ Kippen. As romantic music plays on the soundtrack, Cyrus asks TJ, “Is there anything else you want to tell me?” TJ responds, “Yeah,” and then asks the same question. Cyrus says “Yes” while TJ takes his hand. The camera pans away while the music swells as a fire illuminates the emotionally-charged scene.

Andi Mack has thus joined a number of other television shows aimed at children that feature transgender and/or homosexual characters. These include Chilling Adventures of Sabrina on Netflix, Euphoria on HBO, and Batwoman and Charmed on CW.

In February, the sexual orientation of the Cyrus character on Andi Mack was confirmed. At that time, he was the first to say “I’m gay” on a Disney Channel children’s television series. On Twitter, Luke Mullen, the actor who played the TJ character, wrote that he hoped young viewers would be proud of their sexuality as a result of watching the series.

“Honored to be apart of such a groundbreaking show,” Mullen wrote. “I hope my character can inspire people to proud (sic) of who they are and love who they love.”

The Andi Mack show has aired for three seasons and followed a coming-of-age theme, receiving gushing reviews from critics and LGBTQ advocates. The series delved into the life of the 13-year-old eponymous female character and has received the highest ratings on U.S. television in its time slot among kids ages 6 to 14. The series was directed by Terri Minsky and followed the life of Andi (portrayed by Peyton Elizabeth Lee), her family and close friends, Cyrus (Joshua Rush) and Buffy (Sofia Wylie).

but the fact is that the capitol is the epicenter of the dialogue and debate of our country that is so important to the values that we all share. pic.twitter.com/0U05wfxuZS

However, despite some of the actors’ affirmation of homosexual activity, one of the actors in the series was fired for trying to confirm a sexual hookup with a minor in Utah. Stoney Westmoreland, who played Andi’s grandfather, was arrested and then charged in the case. He was fired from Andi Mack, as well as other acting gigs.

Westmoreland, who was 48 at the time, was subsequently charged with six felony counts in 2018 after law enforcement alleged that he used the Grindr dating app to seek a sexual encounter with someone he thought was a 13-year-old boy. Westmoreland had played roles in the television series Breaking Bad and Scandal.

“We had the honor of breaking a lot of new ground for Disney Channel. We were its first serialized show, its first series centered around an Asian-American family and its first to feature an LGBTQ character who spoke the words, 'I'm gay,'” Minsky said in a statement in April. “But the best part of making Andi Mack was our audience, who let us know we mattered to them. The series finale is for them.”

The leader of GLAAD, one of the most powerful LGBTQ advocacy groups in the United States, hailed the series as reflecting the lives of homosexual young people.

Rush, who played Cyrus, visited Capitol Hill in July. On his Twitter account, he stated that he saw Democrat House Speaker Nancy Pelosi speak and he visited Congressional offices.

and just as quickly as my time on capitol hill began… pic.twitter.com/kALL9khxFC