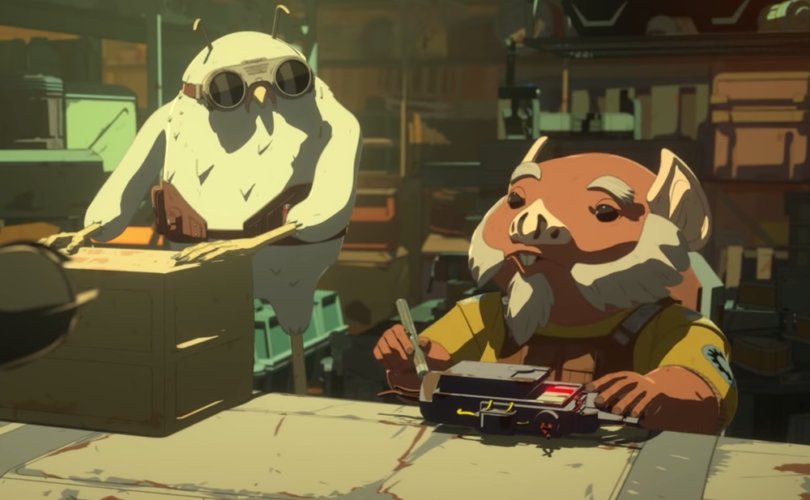 As the series heads into its second season, Disney executive producers Brandon Auman, Athena Portillo, and Justin Ridge said on the Coffee with Kenobi podcast that they are “proud” the two characters, Orka and Flix, are a “gay couple.”

When Ridge was asked about the link between the two characters, he said, “I think it’s safe to say they’re an item.” Ridge added, “They’re absolutely a gay couple and we’re proud of that.”

Moynihan said later on the podcast that he was glad to speak openly about Orka’s tendencies.

“I have had a sentence prepared for a year and a half,” he said. “If someone would finally ask me, I would say, ‘All I can say is that when Flix says I love you, Orka says I know.’ … They’re the cutest.”

Orka and Flix are non-human, but fans had assumed that they are homosexual. In an episode titled Dangerous Business, in the first season of Star Wars Resistance, there is a moment that was perceived to reveal the pair’s proclivities.

The show begins its second and final season on October 6. It was nominated for an Emmy last year for outstanding children’s program.

In an email response to LifeSite, Monica Cole, Director of OneMillionMoms.com, wrote that it is “not shocking” that Disney is “proud” that there is a “gay couple” in the animated children’s series. One Million Moms is a division of the American Family Association

Cole said having a homosexual couple in a children’s show is “extremely disappointing” for numerous families and “completely unnecessary.” She said that it is also disappointing that the series was nominated for an Emmy Award.

“By choosing to abandon family-friendly entertainment, Disney’s move toward more adult fare may ultimately prove to be a huge mistake,” Cole declared, adding: “The Disney Channel is deliberately choosing to promote adult content to children, while the entire Disney media empire is sacrificing children’s innocence.”

Under pressure from LGBTQ advocates to advance an agenda in entertainment, there have been other moments of assumed homosexual relationship in Disney’s productions. For example, in the live-action remake of Beauty and the Beast, there was a fleeting glance between two male characters that was proclaimed to indicate homosexual ties. Disney is behind Marvel’s production of Thor: Love and Thunder, which will be released in 2021 and will feature Valkyrie as the first openly bisexual character in the Marvel Cinematic Universe.

In May, actor Donald Glover, who played Lando Calrissian in Solo: A Star Wars Story, and co-screenwriter Jonathan Kasdan appeared to confirm that Calrissian is “pansexual.”

“How can you not be pansexual in space?” Glover said on SiriusXM’s Entertainment Weekly Radio.

“There are so many things to have sex with. I didn’t think that was that weird. Yeah, he’s coming on to everybody. I mean, yeah, whatever. It just didn’t seem that weird to me ‘cause I feel like if you’re in space it’s kind of like, the door is open! It’s like, no, only guys or girls. No, it’s anything. This thing is literally a blob. Are you a man or a woman? Like, who cares? Have a good time out here,” he added.