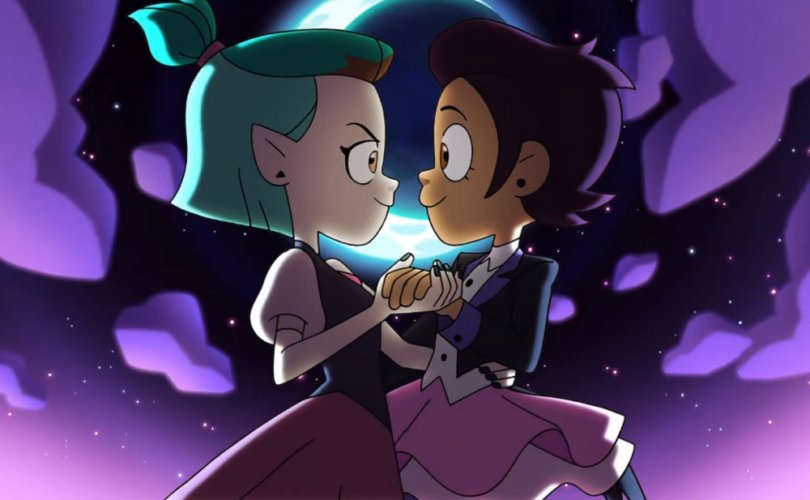 August 18, 2020 (LifeSiteNews) — The Disney Channel recently revealed its first bisexual main character in a cartoon called The Owl House, a show about a girl trying to become a witch.

Luz Noceda, the main character, “has shown she’s attracted to male characters in the show, and in the two most recent episodes, ‘Enchanting Grom Fright’ and ‘Wing It like Witches,’ a relationship between Luz and the recurring female character Amity is explored,” according to Variety. “It is revealed that Amity had intentions to ask Luz to Grom, their world’s version of Prom, and the two share a dance together.”

Dana Terrace, who created The Owl House, explained via Twitter how much the Disney Channel’s attitude toward homosexuality and bisexuality has changed. The show premiered earlier this year and had already been renewed for a second season before that.

Terrace said that while the series was being developed in cooperation with the Disney Channel, “I was very open about my intention to put queer kids in the main cast. I’m a horrible liar so sneaking it in would’ve been hard haha. When we were greenlit I was told by certain Disney leadership that I could NOT represent any form of bi or gay relationship on the Channel.”

She continued, “I’m bi! I want to write a bi character, dammit! Luckily my stubbornness paid off and now I am VERY supported by current Disney leadership. (Thank you [Disney executive Doug Bensimon] and team!) Not to mention the amazingness of this crew.”

I'm bi! I want to write a bi character, dammit! Luckily my stubbornness paid off and now I am VERY supported by current Disney leadership. (Thank you @NashRiskin and team!) Not to mention the amazingness of this crew.

Charlie Bryant, who worked with Terrace on The Owl House, tweeted, “I’m bi and I’m so happy to have worked on Grom. It was my last episode on the Owl House team and it’ll always be so special to me! Everyone involved made it my fav ep, and just like the fandom I can’t wait to see what’s next!”

Spencer Wan, who created the storyboards for the show, wrote, “This was my first time getting to do anything even remotely queer, and I've never been prouder of any board.”

The influential pro-homosexuality and pro-transgenderism lobby group GLAAD praised the Disney Channel for its show. “We’re excited about the LGBTQ-inclusive storytelling in Disney Channel’s new animated series #TheOwlHouse, which is portraying an inclusive, fair, accurate, and age-appropriate world through the representation of its characters,” the organization wrote.

While The Owl House is the first show on the Disney Channel to feature a homosexual or bisexual main character, the once family-friendly company has been pushing homosexuality and gender ideology for years.

Just this May, Pixar, which is part of Disney, featured its first homosexual main character in a new short film, “Out.” The film tells the story of a young man revealing to his parents that he is in a homosexual relationship.

The trailer shows the main character, Greg, looking at a picture of himself standing beside another man and practicing telling his parents of his homosexuality. “Just look them in the eyes and say, ‘Mom, Dad, I’m…,’” he says, as the doorbell rings and his parents walk in.

According to Entertainment Weekly, “With a little nudge in the right direction from a pair of fairy god-pets — a magically fabulous dog and cat who ride in on a rainbow — Greg swaps bodies with his dog, Jim. As he frantically tries to hide the evidence of his relationship from his mom in this new canine body, he quickly learns that maybe there's nothing to hide after all.”

“Before Greg swaps bodies with Jim, he asks himself, defeated, ‘What is wrong with me?’ After the swap, when his mother asks the same question of him, having seen him act like a dog, Greg replies, ‘Nothing.’”

Pro-family advocates were also dismayed at the fact that Disney’s and Pixar’s movie Onward, which was released earlier this year, featured a purple cyclops police officer, Officer Specter, voiced by lesbian actress Lena Waithe, who talks about her “girlfriend.”

The next superhero movie made by Marvel, which, like Pixar, belongs to Disney, will feature a kiss between two men.

“I just shot a Marvel film with the first openly gay superhero, The Eternals. I’m married [sic] to the gay superhero Phastos, played by Atlanta’s Brian Tyree Henry, and we represent a gay family and have a child,” he explained.

In addition to playing a homosexual character, Sleiman is attracted to members of the same sex himself. Marvel specifically sought out an actor who is same-sex attracted.

According to a pro-homosexual and pro-transgenderism activist, Elizabeth Birch, roughly 40 percent of Disney employees in the late 1990s were homosexual. “But when I said to Michael Eisner, CEO of Disney, I said, ‘Thirty percent of your employees are gay.’ And he said, ‘You are wrong, Elizabeth, it’s 40 percent.’”