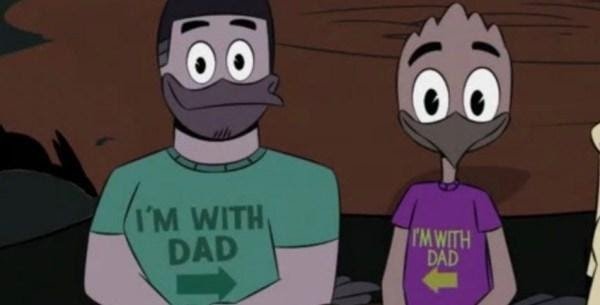 April 14, 2020 (LifeSiteNews) – Disney has introduced a male couple as the parents of two youngsters in the reboot of its popular DuckTales.

The show previously had only hinted about Violet’s gay dads, but the season three opener left nothing to the imagination. It also revealed that Violet’s dads have adopted her best friend, Lena.

In season three’s first episode, as Lena steps forward to be recognized during a Junior Woodchuck meeting, her excited sister cheers for her from the crowd, shouting, “That’s my sister from a couple misters.” Violet is seated next to two adult males, each wearing a tee shirt proclaiming “I’M WITH DAD” and an arrow pointing to the other half of the male couple.

A step in the right direction for LGBT representation… Thank you so much, #DuckTales pic.twitter.com/0wVPLLm4zP

Here are some additional screenshots of the gay Duck Dads:

In a Tumblr blog post, DuckTales co-executive producer and story editor Frank Angones seemed to express regret that gay representation on the show isn’t center stage because the show is rooted in 1980s characters involved in “heteronormative romances.”

Want to be very upfront and honest about this: Violet’s dads are present and show up but do not play a huge role in the story thus far. As with all of our characters, we had a lot of conversations about who Violet was and what her background was and came up with this fun notion of her too enthusiastic, overly supportive dads who love being dads. We didn’t really have a story built around them, but when the time came for an episode focusing on Huey and Violet in a particular situation, it made sense that they would be there.

I’m well aware that the “queer representation through parents and background characters” trope is an issue, and we’ve sort of stumbled backwards into a lot of heteronormative romances in this show due to legacy characters with pre-existing relationships (Scrooge and Goldie, Donald and Daisy, Fenton and Gandra).

Angones also lamented how difficult it is to change established Disney characters, but suggested that was “no excuse” not to plow ahead and seek to feature more gay characters and storylines.

The DuckTales co-producer concluded by promising “there’s always opportunity for a lot more … I’m dedicated to being better and finding new opportunities for three-dimensional representation, on this show and the next and the next.”

“They’re really making the freaking ducks gay,” declared One Angry Gamer blog. “There’s no longer any denying that there truly is a gay agenda to inculcate kids with LGBTQIA+ content.”