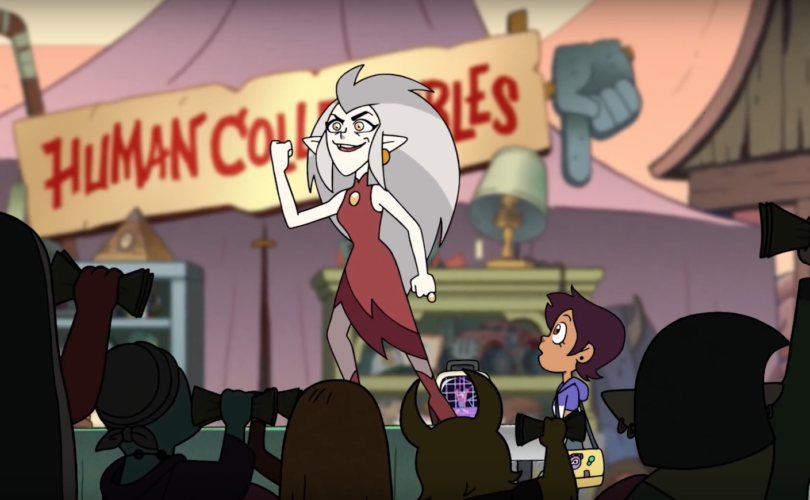 Eda the Owl Lady, the most powerful witch on the Boiling Iles, and her young teenage protege Screenshot: Disney trailer for 'The Owl House'”

January 9, 2020 (LifeSiteNews) – The Disney Channel will premiere a new cartoon – The Owl House – on Friday, January 10, that promises to introduce young viewers to a world of demons and witchcraft.

According to Disney, “The series follows self-assured teenage girl Luz, who discovers a portal to another realm where humans are not well-liked, and she must disguise herself in order to fit in at witch school.”

Disney describes that realm as a “Demon town,” where Luz takes up residence with Eda the Owl Lady, “the most powerful witch on the Boiling Iles.”

Luz declares, “Someday, I’m going to be just like her.”

Disney: going farther into the darkness of the spiritual world that opposes God

“Folks, if you think this latest ‘Owl House’ show is just ‘fantasy and fun’ think again,” wrote Deborah Bunting in a commentary penned for CBN (The Christian Broadcasting Network).

“The show tries to portray witchcraft as a positive tool to fight evil,” explained Bunting.

“That's similar to what real-life witches have been promoting over the past few years as they've been putting hexes on President Trump and others in order to fight for their beliefs.”

“Over the years, Disney has gone farther and farther into the darkness of the spiritual world that opposes the living God, coming up with programming and characters that lead the vulnerable into that dark world of deception.”

“This spiritual realm that opposes God is real. Demons are real,” warns Bunting. “And they are out to deceive your children and draw them in to be pawns of the enemy of their souls, the Devil, otherwise known as Satan. His devices and plans are to destroy your kids and grandkids spiritually, physically and emotionally. You must protect them from being enticed into this demonic world.”

Making the demon realm ‘feel like home’ for kids

“The original pitch (for the show) was ‘girl hangs out with witch in hell,’” voice actor Alex Hirsch told Newsweek.com.

The show’s art director, Ricky Cometa, explained that when the show’s creator, Dana Terrace, first approached him, “she said that ‘we're trying to make this demon realm a part of Disney.’”'

“We really wanted to make this demon realm feel like home, and just had to figure out how to do it,” said Cometa.

The writers room for the show is “full of books on witchcraft, witches and spells to take inspiration from,” according to the Newsweek piece.

The visual design of the show is inspired by various European painters such as Hieronymus Bosch, who was best known for his surrealistic depictions of hell.

Show creator Terrace, who first became acquainted with religious painters while growing up in Catholic school, said Bosch’s twisted takes on angels and demons would make for a “cool show in that art style.”

Last month, controversy arose over when major retailers such as Walmart, Amazon, and Barnes & Noble offered a book inviting young children to learn how to summon demons.

Written for 5- to 10-year-olds, A Children’s Book of Demons directs kids to “conjure gentle demons by writing their sigils, which serve as ‘a phone number’ straight to the spirit.”

“As ridiculous as the ‘demons’ contained in the book may be, there is nothing innocent or fun about even pretending to summon evil spirits,” noted Elizabeth Johnston, aka  Activist Mommy, on her blog. “But who is to say it is pretend? The spirit world is real and is no laughing matter.”

“It is a sign of the degeneration of our society that making use of demons is considered acceptable, and it manifests ignorance of their malice and desire to do us harm,” renowned exorcist, Fr. Chad Ripperger, told LifeSiteNews. “Books such as these ought to be avoided by parents and children, as they pose a possible opening to demons’ influence in their lives, which will only end in affliction and suffering.”

While The Owl House has not yet premiered, The Disney Channel has already signed on for a second season of the show to be produced.