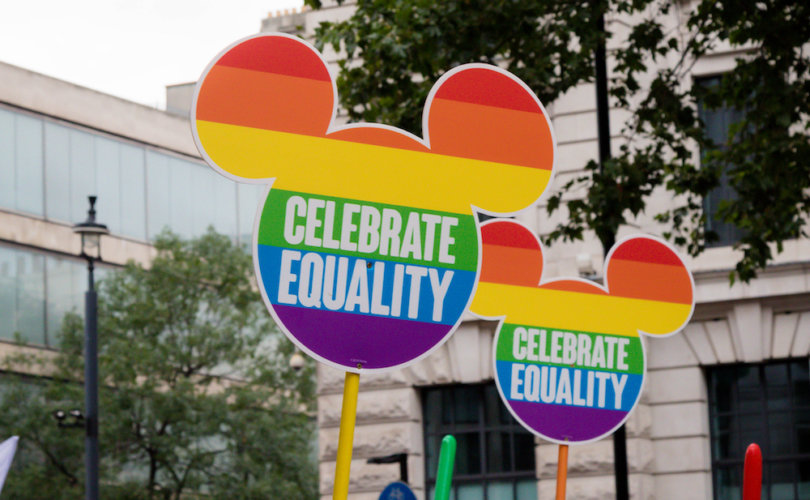 BURBANK, California (LifeSiteNews) — Disney has announced a clothing line targeted at babies and young children to promote “Pride Month,” the annual June celebration of homosexuality. Profits from sales of these clothes will support a variety of organizations that encourage kids to embrace homosexual or gender dysphoric inclinations.

“The Disney Pride Collection was created by LGBTQIA+ employees and allies at The Walt Disney Company and is a reflection of their incredible contributions and place at the heart of the company,” the company stated. “We stand in solidarity with our LGBTQIA+ community everywhere.”

“The Walt Disney Company will be donating all of our profits from the Disney Pride Collection sales now through June 30, 2022 to organizations that support LGBTQIA+ youth and families. This includes sales of Pixar, Marvel, and Star Wars Pride Collection merchandise,” the entertainment company stated.

Disney presents different clothing options, though it only breaks down the genders into “boys,” “girls,” “men,” and “women.”

It includes a “Marvel Pride” t-shirt for children and Mickey Mouse pins in different colors, along with other items.

Disney is losing the support of consumers

Its promotion of the LGBT agenda comes at a time when many Americans are being turned off by the company’s embrace of sexual politics and its opposition to parental rights.

The company denounced Florida’s new anti-grooming law, the Parental Rights in Education bill. It also promised at a subsequent town hall meeting to inject more LGBT characters into its programming.

“Our goal as a company is for this law to be repealed by the legislature or struck down in the courts,” a statement posted on the company’s Twitter on March 28 said. The company never refers to the bill by its real name, the Parental Rights in Education bill, but instead uses the term favored by the media and homosexual activists, calling it the “Don’t Say Gay” bill. The word “gay” does not appear anywhere in the legislation.

Disney has also lost $50 billion in stock market value between March 1 and the end of April.

“It’s stunning: brands typically have much higher favorability ratings than political figures,” journalist Christopher Rufo commented. “But when Disney started to promote left-wing racial and sexual politics, it soon had a favorability rating roughly equal to the most polarizing national politicians. A lesson there.”