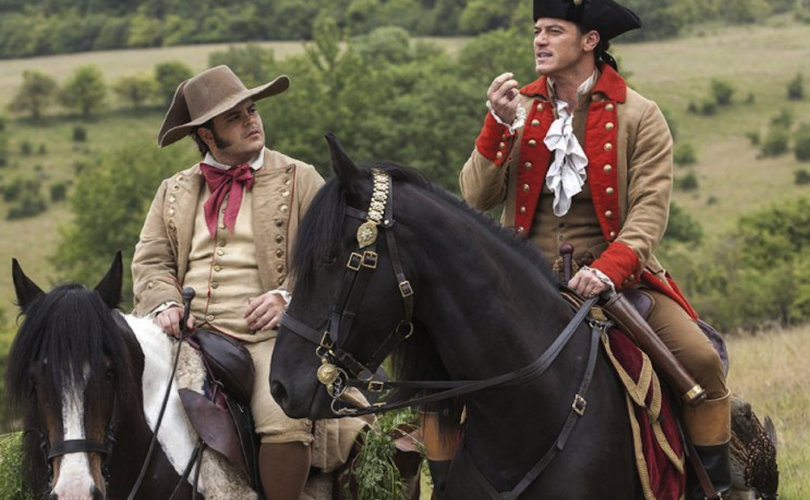 LeFou (Josh Gad), left, and Gaston (Luke Evans) in Beauty and the Beast.Disney

March 2, 2017 (LifeSiteNews) – Disney's forthcoming Beauty and the Beast cinematic remake will feature a gay subplot, according to the film’s director, thought to be a first in the film company’s history.

Belle’s suitor Gaston, played by actor Luke Evans, has a male admirer via the new characterization of his manservant LeFou (Josh Gad).

Condon explained in an interview with British gay lifestyle publication Attitude Magazine how the LeFou character will be used in the movie to highlight homosexuality.

“He's confused about what he wants,” he said. “It's somebody who's just realizing that he has these feelings. And Josh makes something really subtle and delicious out of it.”

“And that's what has its payoff at the end, which I don't want to give away,” Condon continued. “But it is a nice, exclusively gay moment in a Disney movie.”

A recently released Beauty and the Beast trailer clip shows LeFou singing the film’s “Gaston” song while dancing in campy fashion as he lavishes extravagant praise upon Gaston. The latter appears to like the attention.

Condon said this rendition of LeFou is part of a 'watershed moment' for Disney, the Daily Mail reports.

“The studio is sending out a message that this is normal and natural – and this is a message that will be heard in every country of the world, even countries where it's still socially unacceptable or even illegal to be gay,” Condon stated.

The Gaston-LeFou gay storyline will play beneath the main story centered on Belle, played by Emma Watson, and her relationship with the Beast (Dan Stevens).

News of the first official Disney character exploration of homosexuality on film comes just after several same-sex kisses were shown in the latest episode of the company’s animated Star vs. the Forces of Evil program. The show, which targets children and adolescents, airs on Disney XD, the company’s digital cable and satellite television channel.

This week, the program included a scene at a boy band concert that had several concertgoers, including gay and lesbian couples, kissing while the band sings “Best Friends.”

Though some viewed the same-sex representations as too subtle, according to the UK media outlet’s report, many took to Twitter to applaud Disney’s first-ever gay kissing scene in the children’s cartoon.

While Disney is achieving some “firsts” with its gay movie character and same-sex on-screen cartoon kisses, its television network has been portraying same-sex relationships for years.

Disney Channel debuted a lesbian couple on its Good Luck Charlie in 2014, and Disney confirmed last year that two characters on its animated Gravity Falls, which began on Disney channel before moving to Disney XD, are a gay couple.

LGBT activists have pressured Disney to feature more openly gay relationships in its programming, feeding conjecture over past, current and future Disney characters being gay.

A May 2016 Cosmopolitan article cast a dozen Disney characters over the years as likely gay.

These included Flora, Fauna, and Merryweather from Sleeping Beauty, Ursula and  Sebastian the crab in The Little Mermaid; Cogsworth from Beauty and the Beast; Nakoma from Pocahontas, Beauty and the Beast’s Gaston; the Genie and Iago in Aladdin; Winnie the Pooh’s Rabbit; Scar from The Lion King, Li Shang in Mulan; and Alice from Alice in Wonderland.

The directors of last year’s Moana from Disney said it was entirely possible for Disney to feature an LGBT princess.

“It seems like the possibilities are pretty open at this point,” Ron Clements told Huffington Post in November.

“It would be driven by a director or a directorial team that really wanted to push that and if (Disney Animation’s chief creative officer) John Lasseter liked the idea,” John Musker added.

During the spring of 2016, the hashtag #GiveElsaAGirlfriend was trending as part of a campaign for Disney to have the film’s lead, Elsa, come out as a lesbian in the sequel scheduled for 2018.

Other fans of Frozen – the highest grossing animated film of all time — were concerned about the damage such a move would do to countless young children and launched a petition urging Disney to resist liberal pressure.