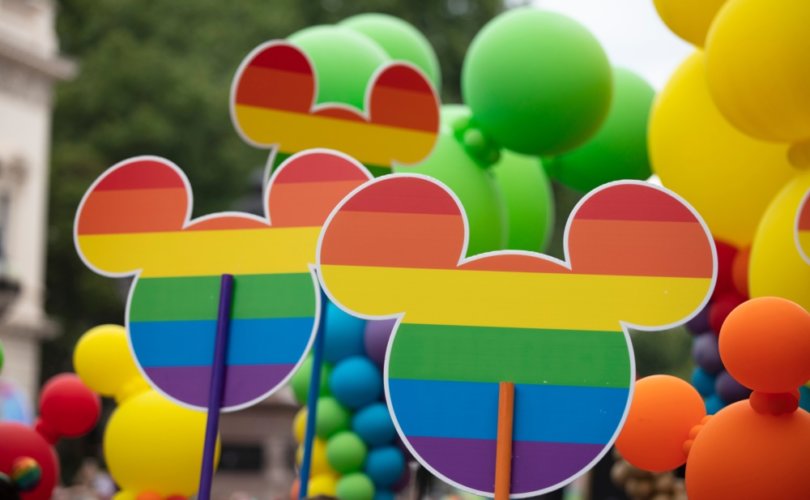 (LifeSiteNews) — After gaining nationwide attention for publicly opposing a Florida bill prohibiting schools from discussing gender and sexuality with young children, Disney has now reportedly set its sights on a Texas order classifying sex change surgeries for children as “abuse.”

The move comes as more than half of Disney consumers reportedly think the sprawling global corporation was wrong to oppose Florida’s Parental Rights in Education bill designed to protect children from the harms of radical gender ideology.

Disney Chief Human Resources Officer Paul Richardson announced the influential global company’s decision to fight the Texas order during a company-wide meeting with staffers on Monday, during which Disney leadership committed to conducting “a global listening tour” for its LGBT employees, according to Reuters.

In the meeting, Richardson said Disney is set to “take action” against Texas Republican Gov. Greg Abbott’s February directive to launch investigations into “any reported instances of Texas children being subjected to abusive gender-transitioning procedures.”

“Because of our presence in Texas,” Richardson reportedly said, according to The Daily Wire, “we want you to know that we’ve signed on to the Human Rights Campaign’s letter opposing the Texas bill that criminalizes parents who provide for their transgender children gender affirming care.”

Grateful to Disney employees who reached out to @realDailyWire in real time during today’s meeting to tell us that company is now planning to oppose TX executive action against sex change surgeries for children. https://t.co/iAZIqhyOvG

Reuters also noted that during the Monday staff meeting Disney both “reiterated its commitment to pause political contributions in Florida,” and promised to “support the Human Rights Campaign’s fight against” the Texas executive order.

The Human Rights Campaign (HRC) is a pro-LGBT organization which had lobbied Disney to take a stand against Florida’s Parental Rights in Education Act, dubbed the “Don’t Say Gay” bill by critics.

Earlier this month, the HRC announced it would refuse a $5 million donation from Disney CEO Bob Chapek until the corporation took “meaningful action” to oppose the Florida legislation.

Disney’s activism in support of radical LGBT agenda items comes as conservatives both inside and outside the company have expressed concerns about the direction the “family-friendly” company has taken.

The Daily Wire reported that an employee who spoke with the outlet “described the presentations during the meeting as a strategy session for circumventing the will of mothers and fathers.”

“These activist employees and outside organizations recognize Disney’s cultural significance,” he said. “They want to use the company to make an end-run around parents through content creation and political pressure. They see it as their mission to rescue the next generation from their conservative parents.”

As leftist employees plan a walk-out Tuesday to pressure Disney into taking further action against legislation protecting kids from both LGBT ideology and destructive surgical and hormonal treatments, conservative employees have crafted an open letter slamming the company for allegedly ignoring their voices and politicizing the company.

“The Walt Disney Company [TWDC] has come to be an increasingly uncomfortable place to work for those of us whose political and religious views are not explicitly progressive,” the employees wrote. “We watch quietly as our beliefs come under attack from our own employer, and we frequently see those who share our opinions condemned as villains by our own leadership.”

The conservative employees went on to explain that Disney’s “evolving response to the so-called ‘Don’t Say Gay’ legislation in Florida has left many of us wondering what place we have in a company actively promoting a political agenda so far removed from our own.”

The employees also asserted that the Disney leadership have been pressured by leftist activists to “take a strong stance on not only this issue but other legislation” like the Texas order, and to crack down on “employees who disagree with them.”

“This politicization of our corporate culture is damaging morale and causing many of us to feel our days with TWDC might be numbered,” they wrote, adding that “as this politicization makes its way into our content and public messaging, our more conservative customers will feel similarly unwanted.”

“You can only preach at or vilify your audience for so long before they decide to spend their money elsewhere,” the conservative Disney employees wrote.

Conservative employees at Disney have issued an open letter condemning their fellow employees for creating a hostile work environment amid the company’s activism against Florida Gov. Ron DeSantis.https://t.co/vbAlIrPCVm

It’s unclear what success Disney will find in establishing itself squarely as a pro-LGBT organization and aligning itself with organizations that fight laws designed to protect kids.

A national poll commissioned by The Daily Wire earlier this month found that 67% percent of Americans said Disney was “wrong” to oppose Florida’s Parental Rights in Education act, while 61% of Disney consumers believed the company shouldn’t fight the Florida legislation. 40% of Americans polled said they were less likely to buy Disney products thanks to the mega-corporation’s political stance.

Meanwhile, Disney’s political activism comes as the company has faced bipartisan backlash for its dealings with the Chinese Communist Party (CCP). Disney filmed its live-action reboot of Mulan in the same region of China where Uighur Muslims are tortured and oppressed under the CCP regime. Critics have also slammed the corporation for scrubbing content deemed unacceptable by the Chinese government.

In response to Disney’s public opposition to Florida’s Parental Rights in Education bill, the Sunshine State’s Republican Gov. Ron DeSantis hit back at the company earlier this month, asking how “they possibly explain lining their pockets with their relationship from the Communist Party of China?”

“Because that’s what they do and they make a fortune; they don’t say a word about the really brutal practices that you see over there at the hands of the CCP,” the governor said.

In a video exclusively obtained by @FoxNews Digital. @GovRonDeSantis slams #Disney saying “In Florida, our policies got to be based on the best interest of Florida citizens, not on the musing of woke corporations.” pic.twitter.com/Op87xgsLzB

LifeSiteNews reached out to Disney for comment but has yet to hear back.