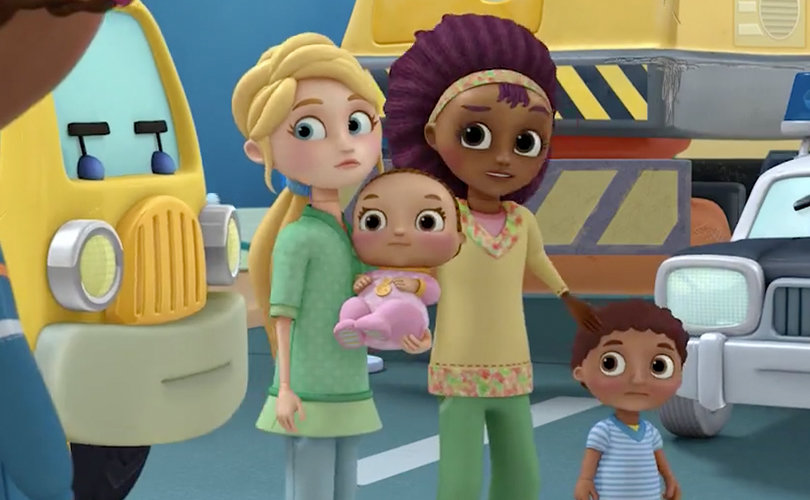 SIGN THE BOYCOTT: Say NO to Disney pushing LGBT agenda to preschoolers!

Doc McStuffins, a show about an aspiring doctor who “fixes” toys with help from friends, featured a family led by two “moms” in its August 5 episode “The Emergency Plan.”

Although Doc McStuffins has been praised by many cultural critics for its depiction of a young African-American female doctor, it's now under fire for its most recent episode pushing same-sex “marriage.”

Here are 12 facts about Doc McStuffins.

1. The creator of the show, Chris Nee, is in a same-sex 'marriage.'

Nee has admitted the show gets “political.”

“I've never been anything but accepted in the world of writing kids' TV, but I was surprised that Disney has been so beyond willing and excited to sort of publicize this part of my life and this part of who I am,” she said. “That’s progress!”

“Disney has been happy to celebrate who I am and who my family is,” she said.

2. Michelle Obama lent her voice to an episode about the protagonist visiting the White House.

The episode included a plug for healthy eating, one of the former First Lady's top causes.

3. The show is specifically aimed at little kids.

Common Sense Media says it has “positive messages” for kids as young as four.

4. Both lesbian 'moms' are voiced by women who are openly lesbian in real life.

Wanda Sykes and Portia de Rossi lent their voices to Doc McStuffins for the controversial episode.

“With this episode, they see a family that looks like our family,” said Sykes. “We're two moms. … it’s going to be very exciting for [my kids] to see our family represented.”

The episode promotes same-sex “marriage” in a “beautiful and positive way,” wrote Sarah Kate Ellis, the president and CEO of GLAAD. “Shows like this reflect our real world, and today that includes the many children being raised by gay and lesbian parents who are all going to celebrate this story.”

Monica Cole of One Million Moms called the episode “unsafe for children” and said families shouldn't watch it. Dan Gainor of the Media Research Center called it “propaganda.”

“We're delighted to see Doc McStuffins season four premiere, titled 'Doc McStuffins: Toy Hospital' and guest starring Anthony Anderson, which aired on Friday 29th July on Disney Junior is the channel's #1 series telecast of 2016 among Kids 2-8 (2.8 rating) and is the third most-watched series telecast ever in Total Viewers (1.4 million),” reported Brown Bag Films. This puts it “behind only the 10th anniversary of 'Mickey Mouse Clubhouse' and the series launch of 'Elena of Avalor.'”

“Her mother is a doctor” while “Dad stays home and tends the garden,” The New York Times reported.

“Chief Executive Bob Iger cited Disney Junior hits like Sofia the First and Doc McStuffins as one of the major reasons the company saw an 11 percent climb in consumer products revenue to $1.1 billion for the first quarter of fiscal 2014,” reported Forbes. The show focuses on teaching kids “behavior” rather than letters and numbers, the article said.

10. It's not the first time Disney has promoted the LGBT cause.

Disney's live-action remake of Beauty and the Beast featured an “exclusively gay moment.” The director of the film said in 2007 he wishes he could “rip pages out of the Bible” when he stays in hotel rooms, but few seem to have Bibles anymore.

A new fairytale children's story, Promised Land, depicts a love story between a prince and a farm boy.

12. There's a petition that allows people to send an email or postcard to Disney expressing their concern about the episode.

The petition can be signed here.