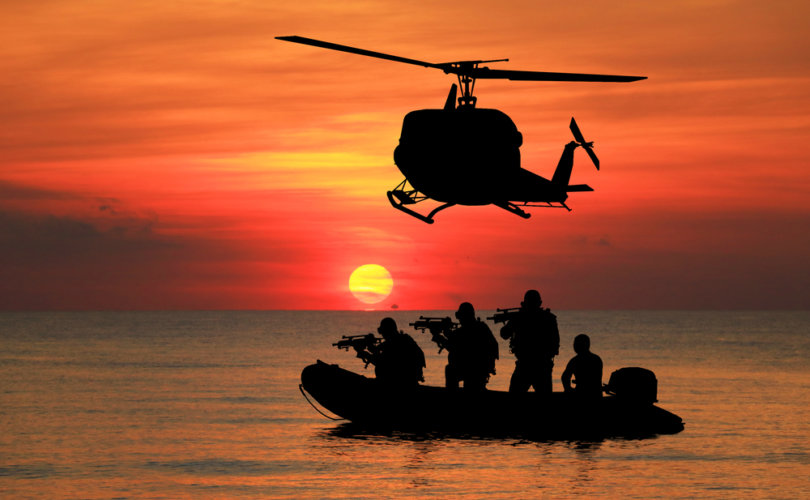 (LifeSiteNews) — One of the U.S. military’s most elite special operations forces will punish troops who refuse the COVID shot for religious reasons, the Epoch Times reported Tuesday.

According to the report, highly-trained and specialized troops serving in the U.S. Navy Sea, Air, and Land Teams (Navy SEALs) were told by their superiors that the unvaccinated among them will not be permitted to be deployed on missions with their team-members.

The restriction even applies to SEALs who have a sincerely held religious or conscientious reason for rejecting the jabs, according to lawyers representing some of the elite troops.

“What they’ve been told is if they apply for a religious accommodation, they will no longer be deployable,” R. Davis Younts told the newspaper.

Younts, a lawyer representing seven of the troops, is reportedly looking to represent an additional 20.

As reported by the Epoch Times, the SEALs were presented with a document signed by Commander Liam Hulin, head of the Naval Special Warfare Basic Training Command.

The document advised the SEALs that special operations personnel, including Special Warfare Combatant-Craft Crewmen, “who refuse to receive the COVID-19 vaccine based solely on personal or religious beliefs will be disqualified from [special operations] duty.”

“This will affect deployment and special pays,” the document continued, clarifying that the policy specifically targets SEALs with religious or personal objections.

“This provision does not pertain to medical contraindications or allergies to vaccine administration,” the document stated.

Some Republicans have responded to the news with outrage, blasting the Navy SEALs’ policy of punishing its members.

Many have argued that refusing to deploy unvaccinated troops, of whom there may be a significant number, could place the U.S. in increased danger from foreign adversaries.

“This is wrong for national security,” said Republican Eric Greitens, Missouri’s former governor. “The only people who will benefit from destroying the combat capacity of Naval Special Operations are the Taliban, Russia, China and other adversaries around the world. This is also wrong at a human level.”

During a podcast interview Wednesday, Rep. Brian Babin (R-TX) excoriated the Biden administration for creating a situation in which military forces such as the Navy SEALs enact discriminatory practices against unvaccinated members, potentially weakening the fighting forces and endangering U.S. security.

Babin argued that with the U.S. “being challenged on all different kinds of fronts,” pulling unvaccinated SEALs from duty “couldn’t be happening at the worst time.”

“But ideology seems to drive this Biden administration, national security be damned,” Babin remarked, adding that it’s “a terrible, terrible thing” which “could be very detrimental to operations.”

“[I]t seems like that they want a federal government that is taking our country in a totally different direction than it has been for 245 years, and getting away from freedom and liberty and constitutional authority and a country ruled by law, not by … edict or by fiat,” Babin suggested.

According to a report published by the Olean Times Herald, several Republican senators are now seeking to pass legislation aimed at preventing the Department of Defense from issuing dishonorable discharges to service members who refuse to get the jab.

Promoting the legislation, Cruz said efforts to dishonorably discharge military members for failing to take the experimental jab are “an insult to our servicemen and women who have served with honor.”

It is unclear how many SEALs will be affected by the policy. Some have estimated that hundreds may be pulled from deployment if the unvaccinated troops continue to hold out.

“Based on the early math that hundreds of Navy Seals out of a total population of 2500 may be unvaccinated, it would appear Joe Biden & Lloyd Austin are willing to potentially part with up to 10% of the Navy Seals over their unconstitutional vaccine mandate,” wrote American political advisor and real estate entrepreneur Blair Brandt. “This is lunacy.”

News of the Navy SEALs’ refusal to permit religiously exempted members from deploying with their teammates comes after the Biden administration’s Department of Justice moved earlier this month to force all service members to get the jab following the Food and Drug Administration (FDA)’s approval of the Pfizer-BioNTech double-shot mRNA drug.

With the backing of President Joe Biden, Defense Secretary Lloyd Austin announced in August that subsequent to FDA approval, all U.S. service members would be required to get the COVID-19 shot.

Ready Reserve, including the National Guard, who are not fully vaccinated against COVID-19,” wrote Austin in a memo dated August 24.

“Mandatory vaccinations are familiar to all of our Service members, and mission-critical

inoculation is almost as old as the U.S. military itself,” Austin claimed. “Our administration of safe, effective COVID-19 vaccines has produced admirable results to date, and I know the Department of Defense will come together to finish the job, with urgency, professionalism, and compassion.”

Austin failed to mention the myriad adverse events reported in connection to the shots, or acknowledge that the risk of contracting severe COVID is drastically less among the military population than among other more at risk groups.

To date, only 43 service members out of the roughly 1.3 million active duty members, 1 million reservists, and 450,000 national guardsmen currently serving in the armed forces are reported to have died as a result of the virus since March 2020.

It is unclear what contributing factors or underlying health conditions may have been present in those who passed away.