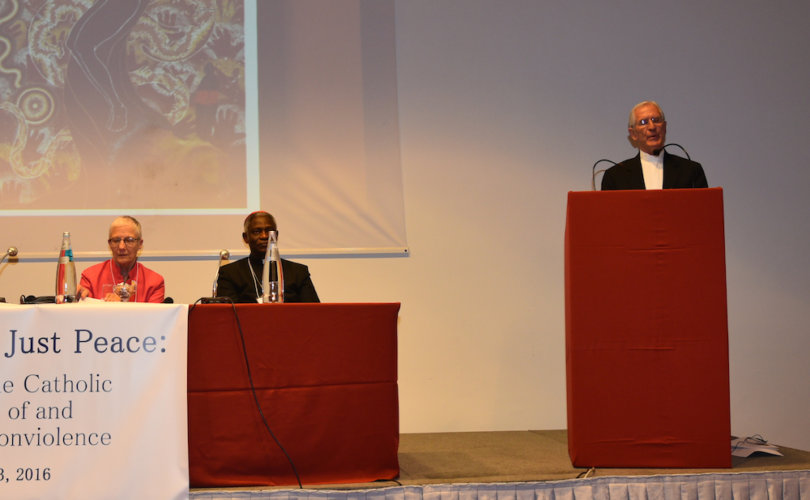 October 18, 2017 (LifeSiteNews) – A group of mostly German-speaking Catholic clerics and scholars, including several dissenting bishops, have signed a vague statement expressing support for Pope Francis and his “pastoral initiatives” in the face of a “vehement attack” against them.

Addressed to “highly esteemed Pope Francis,” the declaration seeks to “express our gratitude for your courageous and theologically sound papal leadership.”

Although the declaration decries a “vehement attack” against the pope, it enters into no specifics and answers none of the arguments that have been made against the orthodoxy of Pope Francis’ controversial apostolic exhortation Amoris Laetitia, such as those contained in the Filial Correction.

Instead, “Pro Pope Francis” offers a vague series of catch-phrases often used by Pope Francis and his supporters to justify the pontiff’s novelties. “Wounded people and wounded nature go straight to your heart,” the statement says, addressing itself to the pope. “You see the church as a field hospital on the margins of life. Your concern is every single person loved by God. When encountering others, compassion and not the law shall have the last word. God and God’s mercy characterize the pastoral culture that you expect from the church. You dream of a ‘church as mother and shepherdess.’ We share your dream.”

The document closes by expressing its hope that “you would not veer from the path you have taken” and promises “our full support and constant prayer.”

Signatories include a number of dissenters against traditional magisterial teaching, including Kevin Dowling, Bishop of Rustenberg, South Africa, who denies the binding nature of the ordinary papal magisterium, and advocates ordaining women and abolishing priestly celibacy. His speech decrying the “conservatism” of the papacies of John Paul II and Benedict XVI was published by the dissident National Catholic Reporter in 2010.

Others include Miklos Beer, Bishop of Vac, Hungary, who is lobbying Pope Francis to ordain married men to the priesthood, and Paul Iby, Bishop Emeritus of Eisenstadt, Austria, an advocate for giving Holy Communion to divorced and invalidly remarried couples since at least 2010, and who also advocates abolishing priestly celibacy, ordaining married men, and “considering” ordaining women in the future.

Several other bishops, some auxiliaries and others retired, also signed the statement, as well as a number of scholars and Catholic organization heads. The majority of signers are Austrians, followed by Germans, Czechs, Poles, and Hungarians, and a small number of people from other countries. The organizers of the declaration are Paul Zulehner, an Austrian “religious sociologist” and theologian, and Tomas Halik, a Czech theologian. Both are priests.

Joseph Shaw, an organizer and signer of the Filial Correction, told LifeSite that it is “commendable to support the Holy Father in carrying out his unique and difficult ministry, both spiritually (in prayer) and in practical ways.

“What would not be supporting the Pope, of course, would be instrumentalizing the confusion caused by some of his recent writings, in order to press forward an agenda which is in conflict with the teaching of the Church.”

“The context and the signatories of this initiative suggest, as Cardinal (Gerhard) Muller recently noted, that some long-term dissidents against Papal authority are merely making use of the present crisis to promote things which they wanted anyway,” added Shaw. “Catholics should pray for the Pope, as the prayer authorized by the Bishops of England and Wales in 1953 expresses it, ‘that he may desire by thy grace those things which are pleasing to thee, and perform them with all his strength.’”