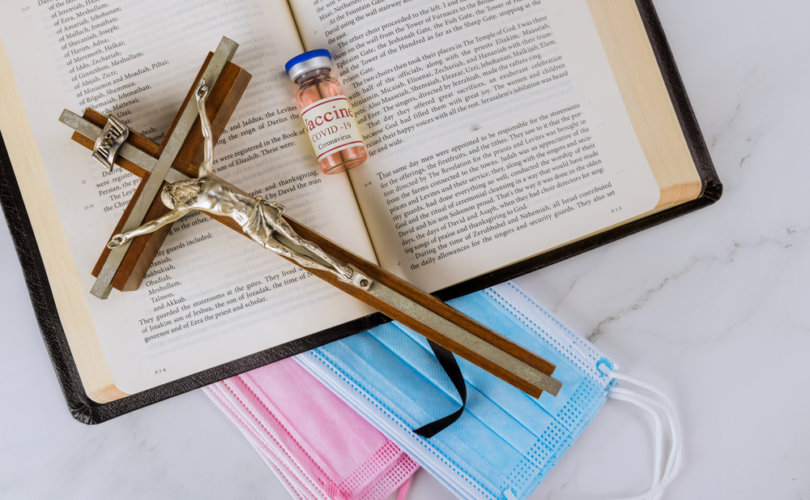 March 9, 2021 (LifeSiteNews) — A recent op-ed in the Jesuit-run America Magazine has called for COVID-19 vaccinations to be made mandatory in order for people to come to church, saying it would be “morally irresponsible” for churches not to enforce such an “act of love and charity toward one’s neighbor.”

The piece appeared last month in the notoriously liberal magazine, and was authored by Dr. Charles E. Binkley and David Kemp. Both Binkley and Kemp stated that vaccination against COVID-19 made the most sense in terms of allowing people to return to the sacraments. Not only that, they issued a strong call for such a vaccine to be forced upon all Catholics if they wished to exercise the right and perform their duty, of attending the sacraments.

“The obvious way for the faithful to be able to resume full participation and unfettered access to the sacraments is to mandate that churchgoers receive an approved Covid-19 vaccine (i.e., one with full Biologics License Approval from the Food and Drug Administration).”

The authors mentioned an “ethical obligation” on behalf of the Church to protect all who were connected with it, namely “clergy, staff and worshipers.” The physical layout of a church, as well as the liturgical rites themselves, were deemed to be potentially dangerous by aiding the spread of infection.

“It is morally irresponsible for churches to invite people to worship and receive the sacraments without taking all effective steps to minimize this risk,” wrote Binkley and Kemp. “Since the approved Covid-19 vaccines provide a simple and effective means to achieve this end, churches would be justified in mandating vaccination.”

Such a mandate would be in the best interests of the “most vulnerable” members of the congregation, argued the pair, listing “[t]he elderly, those with disabilities, pregnant women and their unborn children, and those with medical conditions,” as individuals who would benefit from the mandated injections.

“Mandating the vaccine would allow everyone, and not only those who are at lowest risk for significant morbidity and mortality if they become infected, to participate equally in worship and the sacraments.”

In making such a bold claim, both Binkley and Kemp seem to have ignored the large number of deaths, and severe adverse reactions, which follow the experimental vaccine. The latest data (as of February 26) from the U.S. Vaccine Adverse Event Reporting System (VAERS), lists 25,212 adverse reactions to the injection, of which 1,265 people died, 886 reports were “life-threatening,” and 36 people reported birth defects.

In fact, the injections have yet to undergo testing on pregnant mothers or young children, and warnings have been issued about giving both the Pfizer-BioNTech and Moderna vaccines to pregnant women and young children. The U.K. government released a warning about Pfizer’s jab, saying that it should not be used by pregnant or breast-feeding mothers. Furthermore, the effect on fertility was “unknown,” and so the document advised women to avoid conceiving a child for two months after the injection.

Despite these prominent issues and fatal concerns, America Magazine ridiculed such concerns, blithely mentioning that “medical authorities” now recommended pregnant mothers to have the jab, since “the vaccine poses less harm to the mother and her unborn child than infection with the virus does.”

Binkley, a bioethicist, and Kemp, a professor of legal writing, advocated the stance that apart from some particular medical reasons (of which pregnancy was not one), there were no legitimate reasons at all which would allow one to refuse the vaccine. Referring back to a recent Vatican document, they declared the vaccines morally acceptable, despite the connection which they have to abortion.

But such a connection is not to be lightly ignored: Catholic biologist Pamela Acker revealed to LifeSite’s editor-in-chief, John-Henry Westen, that the babies involved in the vaccines were born alive so as to extract their tissue while their heart was still beating.

In fact, America’s article even rejected the notion of personal autonomy as a reason for refusing the vaccine.

Going even further, Binkley and Kemp followed the example of Pope Francis by declaring the take-up of the vaccine to be a moral duty towards one’s fellow men: “[T]he central requirement of loving one’s neighbor further supports the moral basis for churches mandating Covid-19 vaccines.”

An interesting point raised by the article, was the manner in which its authors perceived the Church to be necessarily subservient to civil authorities. The duo mentioned how clerics should “embrace vaccine mandates” as a way to return to worship and avoid any conflict, exposing their view that the Church should seek the permission of civil authorities for its actions.

However, in an open letter published in May 2020, Catholic clergy led by former papal nuncio Archbishop Carlo Maria Viganò, Cardinals Gerhard Ludwig Müller, Joseph Zen, and Janis Pujats, reminded politicians around the world that “the state has no right to interfere, for any reason whatsoever, in the sovereignty of the church.”

Despite the article being an opinion piece rather than an official Church declaration, its effect is already being seen, and as such any future impact it might have should not be underestimated. In a parish newsletter, Father Michael Haney OFM of the Cross in the Woods parish in Michigan, held up the America article as the way forward for the Catholic Church.

“I support their position,” Haney wrote, “The obvious way for the faithful to be able to resume full participation is to mandate that churchgoers receive a COVID vaccine.”

— Article continues below Petition —
PETITION: No to mandatory vaccination for the coronavirus
Show Petition Text
1075334 have signed the petition.
Let's get to 1100000!
Thank you for signing this petition!
Add your signature:
Show Petition Text

Meanwhile, a priest friend of LifeSiteNews expressed outrage at Binkley and Kemp’s proposal: “Given the high level of adverse reactions and even deaths in some demographics, the (still) statistically low mortality rate, and the very real ethical concerns regarding the production and testing of these vaccines, this opinion unfortunately seems to want to force Catholics to act against their consciences and does nothing but put more pressure on Catholic faithful.”

Continuing, he added that “given the above factors, there simply is no such moral obligation, and such an opinion just adds to the confusion. Better, surely, to perhaps spend one’s energies on campaigning for an end to the sale, trafficking and use of fetal organs and tissues, rather than pandering to the mass media run narrative that, in some U.S. states, has grown tired, while governors start thankfully ending their unfortunate lockdowns.”

The priest, who wanted to remain anonymous but is known to LifeSite, also warned about the “scandal” which would result, and a potential exodus from the Church: “One of the net effects from all this will be that faithful will either leave those churches where they are not being supported, or may even leave the Church entirely.”