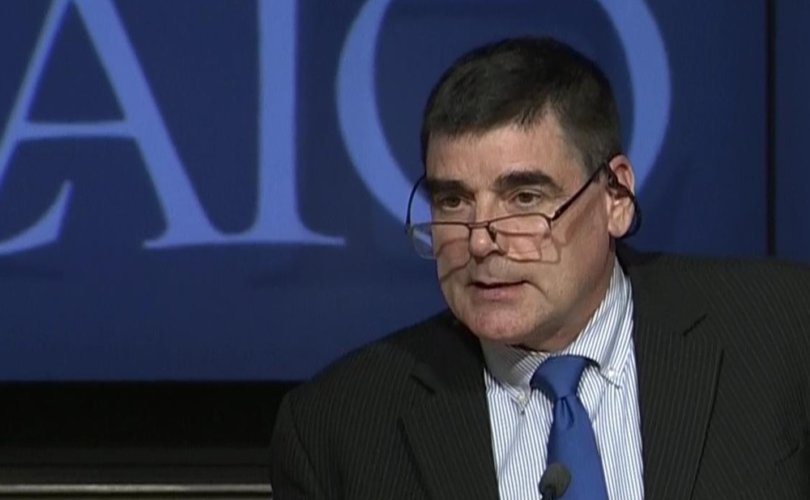 KANSAS CITY, July 6, 2018  (LifeSiteNews) – A columnist for a left-wing Catholic newspaper has ended his Fourth of July piece with a grisly image: himself sitting by a guillotine knitting while his conservative friends have their heads chopped off.

In his July 4 column in the National Catholic Reporter, titled “A grim Fourth of July arrives in the age of Trump”, Michael Sean Winters reflects how, in past arguments with conservative friends, he has joked about putting in “a good word” for them and their families when “the revolution comes.”

Now, however, angered by recent political events, particularly the defeat of a union fight to collect user fees from non-members and the upholding of the travel ban on citizens from some majority-Muslim countries, Winters is no longer interested in saving his pals.

“To my friends in the Republican political and legal establishment who have not stood up to Trump: When the revolution comes,” he wrote,  “you are on your own, and I will be clamoring not for mercy but for a seat next to the guillotine, where I can do my knitting.”

The image recalls Madame Defarge of Charles Dickens’ A Tale of Two Cities, one of the “tricoteuses” or knitters who sat by the guillotine during the French Revolution and watched the public executions. Although the Madame Defarge was fictional, the tricoteuses–and the tens of thousands of decapitations–were not.

Winters’ strange remark was criticized by Catholic blogger Father John Zuhlsdorf, who suggested that Winters, who is against the death penalty, had revealed his true colors.

“Occasionally libs slip and reveal more of what they really think than they usually intend,” he wrote. “Remember, scratch a lib and find, beneath, a well of venom.”

Saying he preferred to think of Winters as the Wyle E. Coyote of the Catholic world, Zuhlsdorf remarked that Winters is now “Madame Defarge, Tricoteuse of the catholic Left.”

“His is a particularly venomous mind but this vision of the future is what the Left really wants,” the blogger averred.

Steve Skojec of the One Peter Five blog was disturbed by the violence of the image.

“It appears that @MichaelSWinters of @NCRonline is comfortable sharing a fantasy of violence and murder against his fellow Americans because they disagree politically,” Skojec wrote on Twitter. “This was actually allowed to be put in print by a ‘Catholic’ publication. Reflect on that.”

Winters’ column appeared in the wake of a July 1 tweet from Infowars' Alex Jones that the Democrats were on the verge of starting a “Second Civil War.”

Neither Winters nor the National Catholic Reporter responded to LifeSiteNews’ requests for comment by press time.