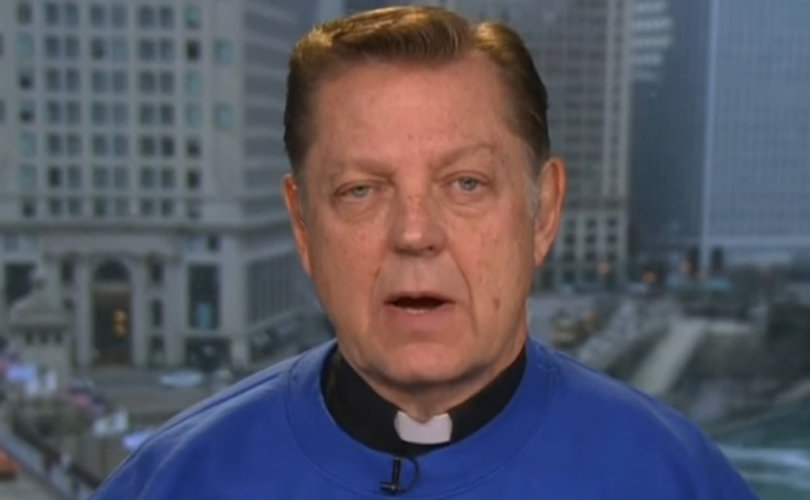 CHICAGO, January 29, 2021 (LifeSiteNews) — Following a decades-old allegation of child sexual abuse that removed him from his role as pastor earlier this month, dissident “famous as a rock star” priest Fr. Michael Pfleger has now been accused of similar misconduct by two brothers in their 60s.

In a Monday press conference that veiled their identities, the two brothers related how the almost 40-year pastor of St. Sabina Catholic Church on the south side had abused them repeatedly, beginning in the 1970s, when Pfleger was a seminarian associated with a west side parish and continuing for years at Mundelein seminary and other locations, including St. Sabina’s.

The older brother, a 63-year-old former Texas police officer, said, “We were poor black kids, small for our age growing up in a very violent neighborhood[.] … Mike targeted us because he knew we were vulnerable.”

According to reports, neither brother had known that the other was abused by Pfleger until earlier this month, when the younger of the two submitted his allegations to the Archdiocese of Chicago, facilitating the priest’s stepping away from his ministry while the matter was investigated.

The younger brother related his difficulties in coping with the exploitation and how it impacted his life through drug abuse and imprisonment, serving sentences in Texas and Illinois.

He said the abuse “destroyed my life.”

In a Sunday statement, Pfleger’s attorneys denied the validity of the allegations, stating, “Father Pfleger has never abused them or anybody else.” They characterized the accusations as “false attacks … motivated by greed.”

It was revealed that the younger brother had requested a $20,000 payment from the priest in a four-page letter dated December 31.

Admitting that this was true, the 61-year-old alleged abuse victim defended the request, saying, “If he sent me some money, that was an admission of guilt. That was going to be how I was going to have proof.”

The attorney for the brothers, Eugene Hollander, said he hopes to resolve his clients’ complaint without suing the archdiocese.

Over the years, Fr. Pfleger has run afoul of foundational Catholic social justice priorities, including when, in 2007, he became the most high-profile Catholic supporter of pro-abortion presidential candidate Barack Obama, praising him as “the best thing to come across the political scene since Bobby Kennedy.”

For such advocacy on behalf of the future president, Cardinal Francis George sanctioned the priest, requiring him to take a “temporary leave of absence” to “contemplate his controversial remarks,” which violated the “discipline common to all Catholic priests.”

Pfleger also handed over the pulpit at St. Sabina to several pro-abortion figures over the years, such as singer Harry Belafonte, who criticized former president George W. Bush for threatening a “woman’s right to abortion,” as well as former pro-abortion Democrat presidential candidate Al Sharpton.

In the theological realm, Fr. Pfleger caused controversy among Catholics by expressing doctrinally dissenting views in advocacy for female “priests” and an end to priestly celibacy.

In 2011, Cardinal George suspended the priest again for combative remarks indicating he would prefer to leave the Catholic Church over his parish, when the archdiocese planned to transition him to a new pastoral role at a nearby high school. After Pfleger apologized, George restored him to his parish.

The parish website’s biography of Fr. Pfleger states how the priest has been an activist against gun violence, alcohol and tobacco billboards that target children and saturate “communities of Color,” the sale of drug paraphernalia, and “negative music that glorified violence and degraded women.”

He has also founded local apostolates to serve his community with employment, youth development, social services, and spiritual advancement, along with establishing a homeless shelter and an “80-unit Elders Village.”

Along with other forms of outreach, he developed a team of parishioners who, instead of calling the police on local prostitutes, went out and paid for their time in order to talk with them about how they could turn their lives around.

In response to the first allegation of the younger brother earlier this month, Cardinal Blase Cupich issued a “difficult” letter to the parish of St. Sabina’s that arranged for Fr. Pfleger to step aside from his role there while an investigation is conducted. In the text, Cupich clarified that “[a]llegations are claims that have not been proven as true or false. Therefore, guilt or innocence should not be assumed.”

Despite these allegations, the St. Sabina parish has shown great support for Fr. Pfleger. On January 5, the community’s “Cabinet” issued a strong statement saying they “believe that these accusations are unfounded” and they “boldly stand behind the integrity, passion, work and ministry” of their “Sr. Pastor, Rev. Michael Pfleger.”

Following this second installment of allegations earlier this week, about 100 people gathered outside St. Sabina to show support for their priest.

Though Pfleger has removed himself from the public eye since the first accusation earlier this month, in a January 6 Facebook message, he wrote, “I am devastated, hurt and, yes, angry, but I am first, a person of Faith, I Trust God. Please keep me in prayer … Pray also for the person, my life is more than a 40 year old accusation, and on that and my Faith I will stand…The Lord is my Shepherd.”